Below is the full statement from the White House:

Today, President Donald J. Trump informed FBI Director James Comey that he has been terminated and removed from office. President Trump acted based on the clear recommendations of both  Deputy Attorney General Rod Rosenstein and Attorney General Jeff Sessions.

“The FBI is one of our Nation’s most cherished and respected institutions and today will mark a new beginning for our crown jewel of law enforcement,” said President Trump.

A search for a new permanent FBI Director will begin immediately.

Below is the letter from Sessions to Trump recommending Comey’s termination. 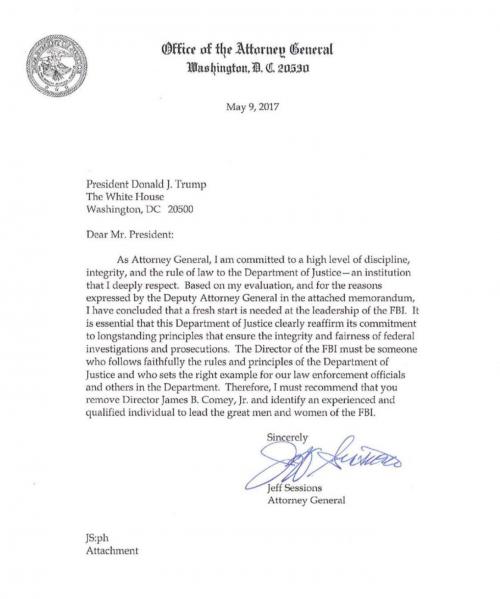 In the letter from Depty Attorney General Rod Rosenstein, he cites the handling of Comey’s Clinton investigation, and says that Comey was wrong to cite his conclusions about the Clinton email probe in July of 2016: “I cannot defend the Director’s handling of the conclusion of the investigation of Secretary Clinton’s emails, and I do not understand his refusal to accept the nearly universal judgment that he was mistaken,” Rosenstein wrote.

Rosenstein was referring to Comey’s decision to announce in July last year that the probe of Hillary Clinton should be closed without prosecution, but then declared – 11 days before the Nov. 8 election – that he had reopened the investigation because of a discovery of a new trove of Clinton-related emails.  Democrats say the decision cost Clinton victory.

Rosenstein also identified several areas in which he said Comey had erred, saying it was wrong of him to “usurp” then-Attorney General Loretta Lynch’s authority by announcing the initial conclusion of the email case on July 5.

Comey “announced his own conclusions about the nation’s most sensitive criminal investigation, without the authorization of duly appointed Justice Department leaders,” Rosenstein wrote. Comey also “ignored another longstanding principle” by holding a news conference to “release derogatory information about the subject of a declined criminal investigation.” 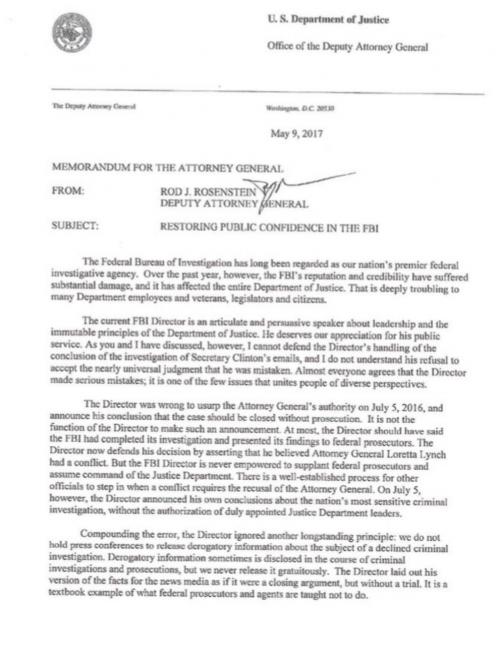 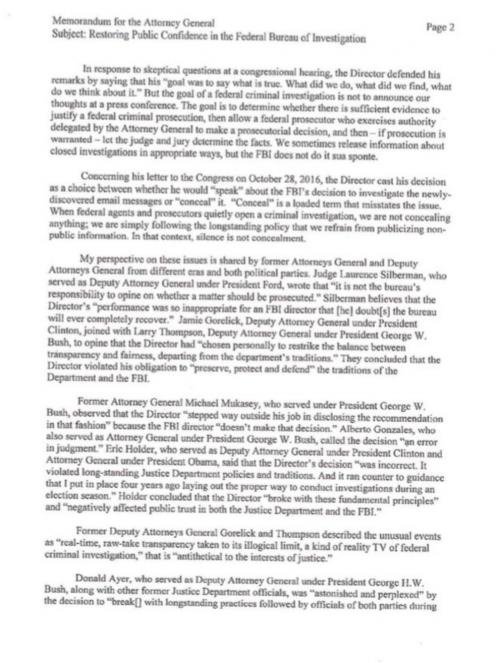 In a separate letter to Comey, Trump said that “you are not able to effectively lead” the FBI, new leadership is needed to restore trust.

More from Trump’s letter to Comey:

“… you are hereby terminated and removed from office, effective immediately. While I greatly appreciate you informing me, on three separate occasions, that I am not under investigation, I nevertheless concur with the judgement of the Department of Justice that you are not able to effectively lead the bureau.”

Full Trump letter to Comey below, where amusingly Trump notes that the FBI director told him ” on three separate occasions” that he wasn’t under investigation. 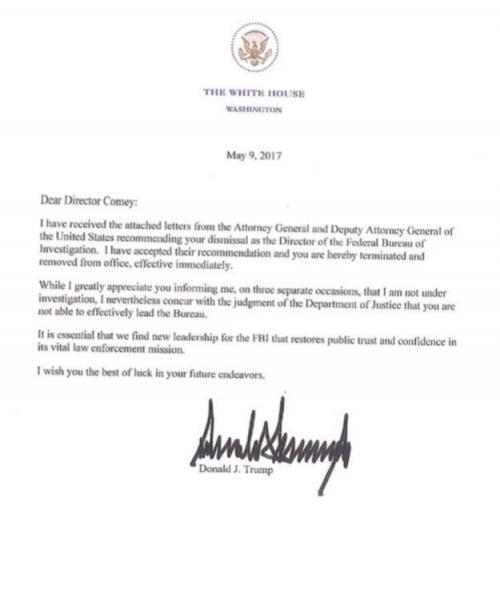 Comey’s firing comes days after he testified on Capitol Hill about the FBI’s investigation into Russia’s election meddling and possible connections between Russia and Trump’s campaign.

Republican Lindsay Senator Graham said after Comey was fired that he believes a “fresh start” will serve the FBI and the nation well.

.@PressSec Graham on Comey’s replacement: “I encourage the President to select the most qualified professional available…” pic.twitter.com/29WFORYEfU

Senate Judiciary Committee Chair Chuck Grassley also applauded Trump’s decision saying “The effectiveness of the FBI depends upon the public trust and confidence. Unfortunately, this has clearly been lost.”

Meanwhile, fellow Republican John McCain criticized the firing of the FBI director saying “Comey is a man of honor and integrity, & he has led the FBI well in extraordinary circumstances.” McCain added that “The president’s decision to remove the FBI Director only confirms the need and the urgency” for a special committee on Russia. 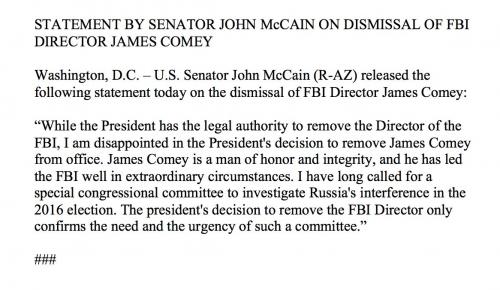 Others were similarly critical, with Sen. Mark Warner, vice chairman of Senate Intelligence Cmte, saying in a statement that “It is deeply troubling that the president has fired the FBI director during an active counterintelligence investigation into improper contacts between the Trump campaign and Russia,” and adding that “the President’s actions today are shocking.”

“Now more than ever, it is vital that our ongoing investigation is completed in a credible and bipartisan way” he said, adding that “we also need to hear directly” from former Director James Comey “about the FBI investigation and related events.” Like McCain, Warner said a special counsel must be appointed.

“That’s the only way the American people will be able to trust the results of any DOJ investigation”:

Elsewhere, Senator Patrick Leahy, Democrat on Senate Judiciary Committee, said Trump’s actions are “nothing less than Nixonian” and that “given that the Attorney General supposedly recused himself from the Russia investigation, he should not have played any role in removing the lead investigator from his duties.”

Will Trump’s termination of Comey be perceived as retribution? It’s very likely: recall that two months ago Comey announced that the FBI was investigating alleged coordination between the Trump campaign and Russia during the 2016 presidential election. Getting rid of Comey would certainly be perceived as one way of putting any FBI probe on indefinite hold. Case in point, the first accuastion of political interference by Trump in the Bureau’s work came from none other than Edward Snowden.

Set aside politics: every American should condemn such political interference in the Bureau’s work. https://t.co/hROwSMg1vd

This FBI Director has sought for years to jail me on account of my political activities. If I can oppose his firing, so can you. https://t.co/zUp5kquy8q

Others, like Rep Brad Sherman have immediately called for a Special Counsel to investigate Trump and Russia to answer what’s “Trump is trying to hide.”

#Trump fires #Comey. No reason given. What’s Trump trying to hide? More than ever, need #SpecialCounsel to investigate Trump and #Russia.

Bernie Sanders chimed in too:

It is clear that whomever President Trump handpicks to lead the FBI will not be able to objectively carry out the Russia investigation.

We need an independent investigation into the Trump campaign’s ties to Russia. 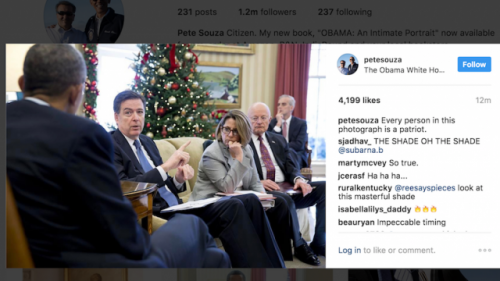 Putting a comical twist on the day’s events, even Richard Nixon was trolling Trump, when the @NixonLibrary twitter account revealed that “FUN FACT” that “President Nixon never fired the Director of the FBI #FBIDirector #notNixonian”

US House Overwhelmingly Passes “Harshest Ever” Sanctions Against North Korea

In a 415-2 vote, the House of Representatives has passed the “Otto Warmbier Act,” a new round of sanctions against North Korea described as the “harshest ever” in US history. If it passes, it would ban anyone who does any business or cooperates in any way with North Korea from having US business ties. The House just passed the Read More…

Welcome to The Daily Wrap Up, a concise show dedicated to bringing you the most relevant independent news, as we see it, from the last 24 hours (8/14/21). As always, take the information discussed in the video below and research it for yourself, and come to your own conclusions. Anyone telling you what the truth Read More…

State Department Denies Obama Ever Said, “No Boots On The Ground”

If Americans needed another example of how completely inept the US government has become, whether that be by way of incompetence or subterfuge, here is a stark illustration of the inadequacy within this country’s political arena. As this nation’s history has clearly shown, it is no secret that the US government makes a living on deceiving its Read More…