There are few events in geopolitics so metronomically dependable you could dance to them, but the North Korean nuclear situation is one of them.

Still, as reliable as this dance has been throughout the years (I myself have been talking about it for a very long time), there is the sense that it is starting to accelerate. And while an errant drummer who speeds up a song might be responsible for nothing more than a few bumps or bruises on the dance floor, the escalation of the nuclear dance is altogether more dangerous. 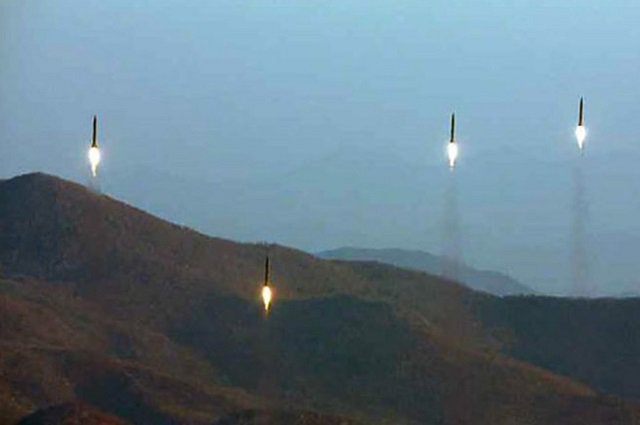 The latest steps toward the nuclear cliff took place on Monday when North Korea fired four ballistic missiles into the Sea of Japan. The missiles, which landed in Japan’s declared exclusive economic zone and put the country on its highest state of alert, are not believed to be intercontinental, but the North Korean government has boasted that it is ready to test-fire an ICBM “at any time, at any place,” perhaps even this year. Given that North Korea is still technically at war with South Korea (and their co-belligerents, the UN and the US), and given that an ICBM is one half of the key to delivering a nuclear payload to the west coast of the United States (nuclear miniaturization being the other half), this is not an insignificant threat.

Worse, this latest whirl around the dance floor comes amid a flurry of worrying developments:

The latter development is a perfect example of how the North Korean situation really could spiral into war, and not necessarily a war involving North Korea. The THAAD anti-missile system is being done under cover of the threat from North Korea, but both Russia and China know full well that it is equally aimed at them. Although anti-missile systems are presented to the public as being solely defensive in nature, military planners know that the ability to deter missile systems is a key requirement for an offensive military gambit.

As Victor Ozerov, chair of Russia’s Federal Defense and Security Committee, told reporters on Tuesday: “This is yet another provocation against Russia[…] Under the guise of a North Korean threat, they want if not to close the ring around Russia, then at least to besiege it from the west and the east.”

Scariest of all is how easy it is for the rumors, speculation, and unconfirmed reports that travel through the newswires in the wake of every such event to garble the facts. It is positively frightening how quickly North Korea’s “unidentified projectile” became a “nuclear missile” in the imaginations of the establishment fake news headline writers.

The North Korean nuclear dance has sometimes been perceived as a type of harmless parochial hoedown. After all, it’s just those crazy North Koreans with their wacky dictator threatening the world’s greatest superpower with their firecrackers and peashooters. But with every new spin around the floor, the dance gets more serious. North Korea’s nuclear program advances, relations between NATO and China/Russia worsen, and the margin for human error grows. Suddenly the world is dancing on a powder keg, and the military contractors who have been milking this situation for everything it’s worth have no incentive to bring the evening to a close.

…But wait! What strange tune is this? It sounds like one member of the band is trying to strike up a different tune! No, not NATO or any of its constituent belligerents. It’s China!

Here’s Chinese Foreign Minister Wang Yi’s latest crazy idea in a nutshell: “Hey guys, how about instead of engaging in a military exercise that simulates a full-scale of invasion of North Korea every single year you try talking to the North Koreans instead? You know, rather than dropping “dummy” nuclear bombs on the peninsula in a “simulated” nuclear apocalypse, why don’t you cut out the exercises and we’ll get our North Korean friends to stop their nuke program. Huh? What do you say, gang?”

It remains to be seen whether the rest of the band will take them up on the offer, but no one is holding their breath. They’re all too busy doing the cha-cha-cha as instructed.

A new study published in the Harvard Law & Policy Review painstakingly describes how Big Pharma deception and federal government patenting have brought about the current U.S. opioid epidemic. (TFTP) As lawsuits pile up against pharma companies, this study confirms that for 20 years, the American public has served as the victim in a gargantuan scheme Read More…

Israeli Gov’t Argues It Can Annex Any Land, Defy Any International Law It Chooses

With its government openly admitting Israel’s rogue-state status and its intention to act without regard to international norms or basic human decency, Israel has indicated that it is hell-bent on ethnically cleansing Palestine and eliminating the “demographic threat” once and for all. TEL AVIV, ISRAEL — During an ongoing court case regarding the legality of Israel’s Read More…

One Reply to “The North Korean Nuclear Cha-cha-cha”