There has been an unprecedented amount of marine-life washing up on shores by the thousands either dead or dying. When still alive, they appeared in most cases to be clearly disoriented. Ones that were helped back to the water would only find themselves right back on the beach, and in some cases internal and external trauma was apparent; periodically dolphins and even whales have been found with perforated ear drums. Some showing up dead with dozens of pounds of toxic plastic waste inside their stomachs. The timeline of these unusual events perfectly coincide with the US Navy’s planned five-year test of underwater sonar and sonic weaponry that commenced in 2014 and will last until 2019. One weapon being tested manipulates a tiny ball of plasma to produce incredible noise.

“There are no noise-cancelling headphones to stop the U.S. Navy’s 235-decibel pressure waves of unbearable pinging and metallic shrieking. At 200 Db, the vibrations can rupture your lungs, and above 210 Db, the lethal noise can bore straight through your brain until it hemorrhages that delicate tissue. If you’re not deaf after this devastating sonar blast, you’re dead. This is the real life of marine mammals destroyed by the U.S. Navy’s all-out acoustic war on the world’s oceans. The collateral damage of this high intensity military sonar is shocking. But because all these millions of dying whales or dolphins are too often out of human sight, they’re also out of mind” – From Collective Evolution’s coverage of the events

No one has yet claimed responsibility for the influx of marine life deaths currently taking place. The Navy however, has computer models demonstrating the estimated marine life casualties due to the tests somewhere in the hundreds, despite its original promise that no animals would die. This in and of itself should be shocking to anyone who values the lives of these animals so unfairly tested upon. The Navy said it developed the estimates by totaling the hours it will test its weaponry over the course of the five-year experiment. These estimates are dramatically shy of the total unexplained death toll attributed to the Navy so far, and there are still three years remaining in the span of the experiments. These tests have been, and will continue to be, responsible for the death of thousands, if not millions, of marine animals. 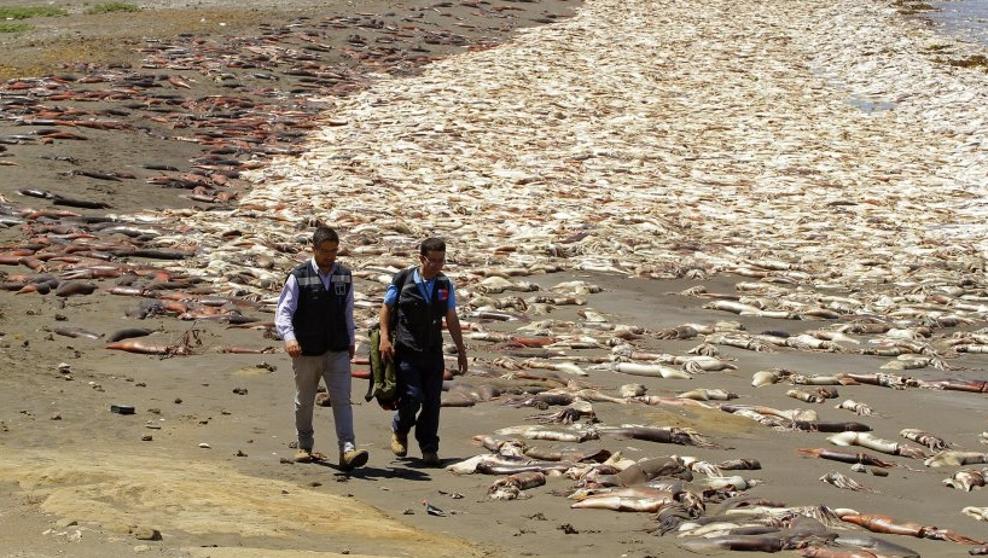 Prior to the commencement of the aquatic tests, environmental groups sued the Obama administration for granting the Navy permits to conduct the underwater sonar tests along the West Coast. The lawsuit, filed in U.S. District Court in San Francisco, claims that the Navy’s sonar use might be strong enough to kill the animals outright. The use of sonar has been associated with similar past incidents including the beaching of 37 whales on North Carolina’s Outer Banks in 2005.

The recent incident in Chile, where tens of thousands of squid washed up dead and dying, occurred during the very same time period that some very interesting footage was released of a sonic wave pulsating across South America and the United States. It appeared to originate in extremely close proximity to the Chilean beach on which the squid were found.

Based on the disclosure of the Navy tests and its admittance that the tests will indeed be fatal to large amounts of sea life, it is by no means a stretch of the imagination to assume the abnormal sonic wave in Chile had something to do with the abnormal death of ten thousand squid, also in Chile. There have been similar events in the past that occurred naturally due to environmental factors, however, the massive animal deaths that occurred in recent years, have not only happened in a volume never before seen in secession, but the vast majority have been unexplained by investigating parties.

Earlier in the month, over 80 whales were found on the southern coast of India. The cause remains unknown. According to Deepak Bilgi, wildlife warden of the Gulf of Munnar Marine National Park, scientists investigating say it is disorientation.

“Fishermen and officials dragged many whales into the sea, but several returned to the shore,” Kumar said. 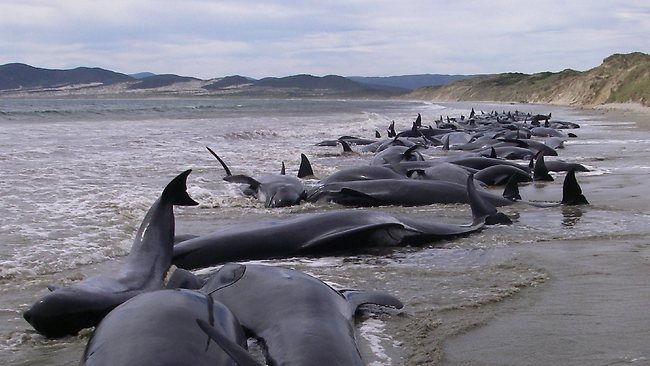 When considering that whales navigate by way of echo location, and knowing that the military is conducting tests on sonar weaponry, the possibility of the sonar tests causing the disorientation of these animals, which ultimately led to their deaths, crosses over into plausibility. It is important to remember that this is not the first time the Navy’s underwater tests have caused untold destruction to its ocean’s inhabitants.

What is interesting is that the Navy is not denying that these tests are taking place. In fact, in 2010 the fisheries service approved the Navy’s five-year plan for operations in the Northwest Training Range Complex, an area roughly the size of California that stretches from Washington state to Northern California. However, the fisheries service was told that the tests would not cause any animal deaths, so the department set the arbitrary boundary for the tests, claiming it was acceptable for the Navy to incur up to 650,000 cases of “harassment” of marine mammals. How this would be monitored and controlled is anyone’s guess. Yet sadly, it makes no difference. From the Navy’s own calculations there have been, and will continue to be, deaths as a result. The only undefined factor is how many animals will actually die in the process.

If this upsets you… Spread it.

That didn’t take long: just ten days after Anthony Scaramucci was appointed as the new White House communications director, the NYT reports that Trump has removed Scaramucci from the role of Communications Director, as requested by the new chief of staff, John Kelly. According to the NYT, Scaramucci’s abrupt removal came just 10 days after the Read More…

Israel’s Education Minister Naftali Bennett said yesterday that he would impose a “shoot to kill” policy in Gaza, including against Palestinian children. Bennett made the comment on Israel’s Army Radio after he was asked what he would do differently if he were the defence minister. Bennett replied: “Everything. I would not allow terrorists to cross the border Read More…

Last week, Donald Trump warned North Korea that it will face “fire and fury like the world has never seen” if it continues to provoke the U.S. with its missiles, and in response, the North Korean leadership immediately threatened to strike America’s military base in Guam. Trump then stated that perhaps the language he used had not been strong Read More…