A new study at the University of La Plata in Argentina found that about 85% of cotton products such as gauze, cotton balls, feminine products like pads and tampons, baby wipes, etc. tested positive for glyphosate. Another even more staggering finding is that 62% of the tested products had traces of AMPA, an environmental metabolite aminomethylphosphonic acid that is a derivative of glyphosate and is potentially one thousand times more toxic than glyphosate.

“The results of this research are very serious. When you use cotton or gauze to heal wounds or for personal hygiene, you do this thinking that the products are sterilized, but in fact you are using products contaminated with a carcinogenic substance,” said pediatrician Vazquez Medardo Avila, part of the Network of Medical Professions of Fumigated Towns in Argentina.

The concern is now escalating because people often use cotton products on open wound, on highly sensitive areas, and, in the case of tampons, in a mucous membrane close to the woman’s reproductive organs. Yet, it is very unlikely that any typical consumer has considered that glyphosate and AMPA chemicals are seeping into their body through hygienic products (which, by definition, are supposed to help maintain health and prevent disease).

The production of GMO cotton has become very common in several countries, including Argentina and the United States, where farmers were sold on using Monsanto’s GMO seeds and agro-chemical products, with the promise of higher yields. During the process of growing GMO cotton, where the plants were designed to withstand the application of glyphosate found in the common herbicide Roundup, farmers are spraying the chemicals onto the plants when the cotton bud is open. This means that Roundup goes straight into the part of the plant that is then used to produce your personal hygiene products.

“…farmers sprayed 2.6 billion pounds of Monsanto’s glyphosate herbicide on U.S. agricultural land between 1992 and 2012, according to the U.S. Geological Survey.” ~ EcoWatch

One way to expose your body to less glyphosate is to reduce the use of cotton products produced in countries such as Argentina and the United States, unless they specifically state that they are GMO-free or organic. There are many new healthier options for personal hygiene, such as organic cotton gauze, organic cotton feminine products, and non disposable silicone replacement for tampons. You can also buy very inexpensive organic cotton balls.

The media in countries where GMO crops account for an overwhelming majority of corn, soy and cotton will not educate the public about the potential dangers of chemically laden personal hygiene and food products. It is up to you to educate yourself about what you put on and into your body and the possible effects.

Below is a graph that further illustrates just how prevalent GM crops have become in the United States: 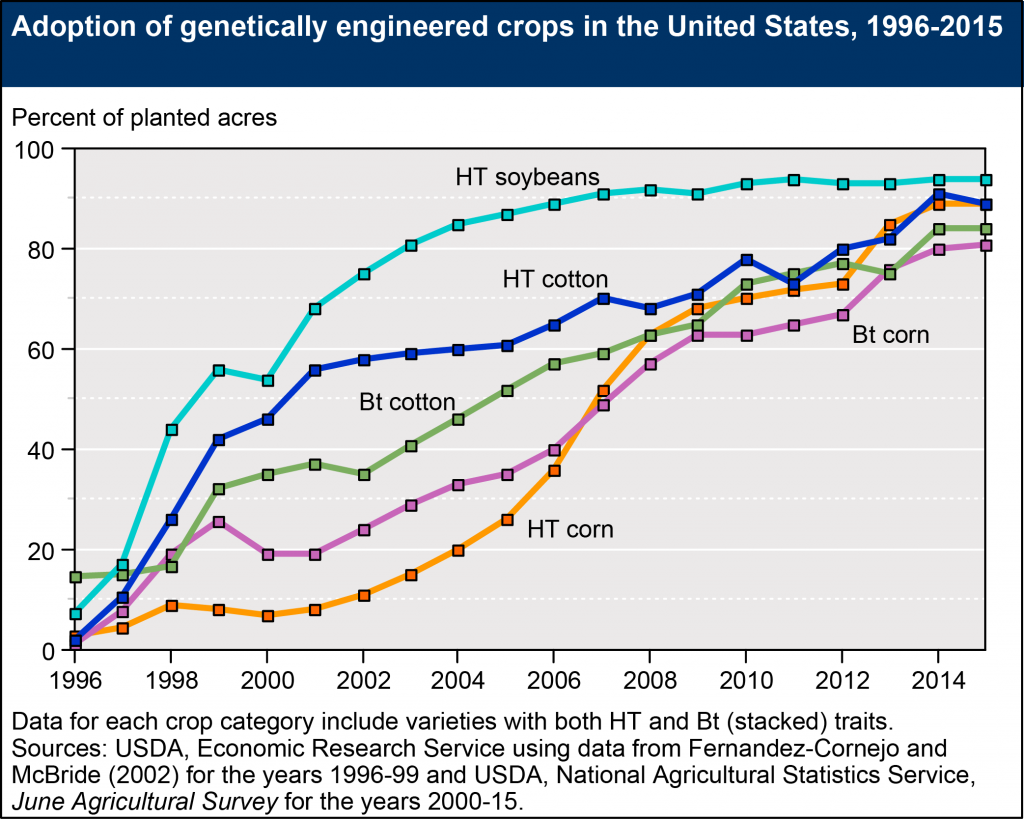 Although Monsanto continues to argue the safety of their products, an increasing number of experts continue to reveal through scientific and field research that exposure to glyphosate has potential carcinogenic effects. The World Health Organization has classified glyphosate as a possible carcinogen.

A Plausible Theory Of What Jeffrey Epstein Was Actually Doing

The first Jeffrey Epstein thread has grown a bit long. Here is a follow up. For an introduction to the Epstein case please read this. A question that no one could so far answer is how Epstein got as rich as he appears to be. A person who calls himself Quantian has an interesting theory of what Epstein was actually doing. Here Read More…

Despite being nowhere near the scale of the 2009 Green Movement color revolution, the recent Iranian protests have nonetheless captured the attention of the world. The questions surrounding the protests are legion but the chief among them are whether or not they are legitimate organic Iranian sentiment or whether they are a Western-backed color revolution Read More…

U.S. Airstrikes Are Wiping Out Entire Families In Yemen And Syria

The United States is killing entire families in Raqqa, Syria, and enabling Saudi Arabia to do the same in Yemen. In June of this year, the U.S. led a campaign to retake the city of Raqqa from ISIS fighters while the Russian and Syrian militaries were also attempting to do the same thing. In the first week Read More…