Special Counsel Robert Mueller has charged former Trump national security adviser Michael Flynn with “willfully and knowingly” making “false, fictitious and fraudulent statements” to the FBI regarding conversations with Russia’s ambassador. Flynn, in turn, is expected to plead guilty in a DC court to making false statements to FBI agents in January 2017, according to the court filing presented below. The plea hearing is set for 10:30 am ET.

Former Trump campaign chairman Paul Manafort and aide Rick Gates were charged with money laundering from alleged crimes that took place before they worked with Trump. A campaign adviser, George Papadopoulos, pleaded guilty to lying to the FBI earlier this year over contacts with officials connected to the Russian government.

After he left the administration, Flynn filed a foreign registration form showing that he hadn’t disclosed multiple contacts and payments from foreign entities while serving as a campaign adviser to Trump starting in February 2016. The company received $530,000 from a Dutch company working on behalf of Turkey’s government, to lobby the U.S. for extradition of an exiled cleric who has opposed President Recep Tayyip Erdogan of Turkey. He’s also disclosed payments from the Russian news site RT, described in an unclassified U.S. intelligence report as “the Kremlin’s principal international propaganda outlet.”

The news about Flynn comes a day after CNN reported that Jared Kushner had met earlier this month with Mueller’s team as part of the investigation into Russia’s meddling in the election, according to two people familiar with the meeting.

The question is whether as part of the plea Flynn will ‘reveal’ something about Trump, because if 6 months after the Mueller probe the best he could get out of Flynn is making a “false statement” about meeting the Russian ambassador, then Trump has nothing to be worried about. 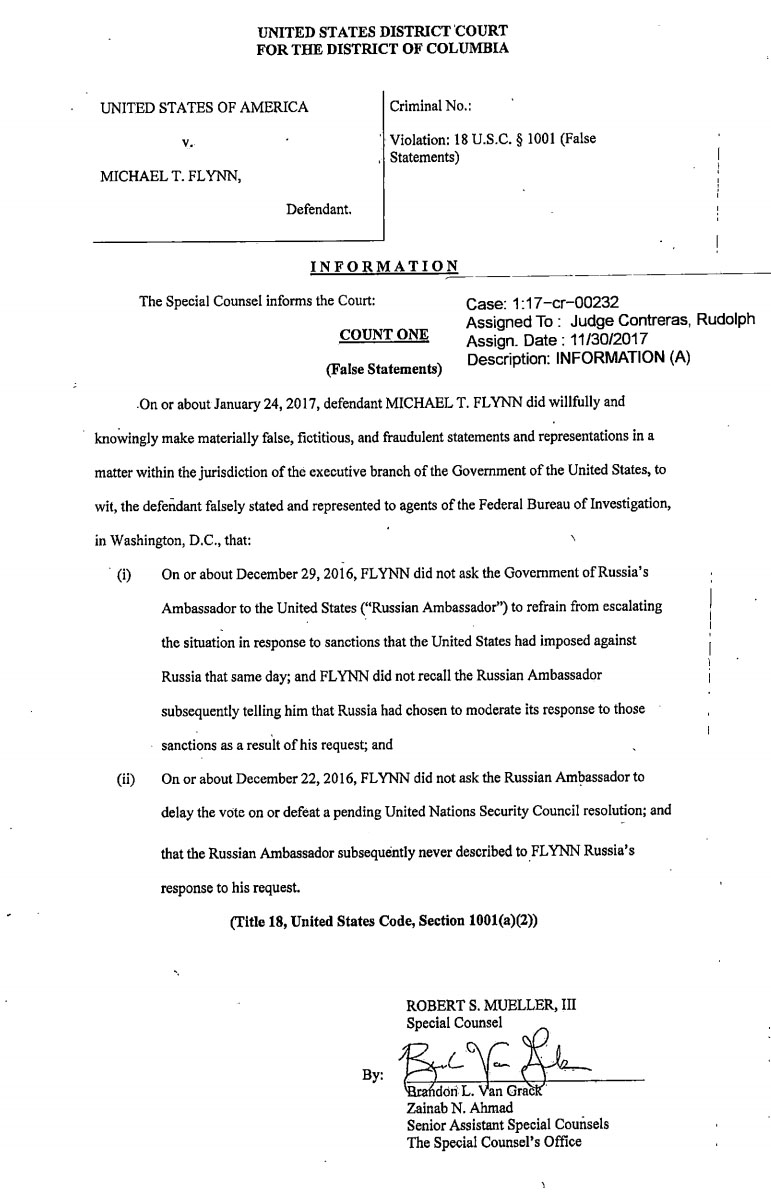 US, UK, And France Are Making The Case For War Against Both Syria And North Korea

The United States, the United Kingdom, and France are gearing up for a renewed assault on Syria and North Korea. Earlier this month, French President Emmanuel Macron said France will strike Syria if chemical weapons have been used against civilians in the Syrian war in violation of the international treaty banning chemical weapons — even Read More…

US Reviewing Support for Saudis After Brutal Massacre, But Will Arms Sales Stop?

The US has resisted previous attempts to hold its ally—or itself—accountable for the civilian slaughter in Yemen. The United States, which is supplying arms and other assistance to Saudi Arabia in its war on Yemen, has “initiated an immediate review” of its support for the kingdom in the wake of airstrikes on Saturday that reportedly killed at Read More…

Most of the remaining Russian forces operating in Syria, including the Tu-22M3 long-range bombers and Beriev A-50 AWACSs are returning to home just days after President Vladimir Putin surprised the world by announcing that Russian military forces would swiftly withdraw from Syria – a promise that elicited accusations of insincerity from the West. The first contingent of Read More…