Recent events have finally exposed the convoluted and failed US strategy being employed in Syria, with the LA Times reporting that separate CIA and Pentagon-backed rebel groups had been fighting one another between the Turkish border and the war-raved city of Aleppo. 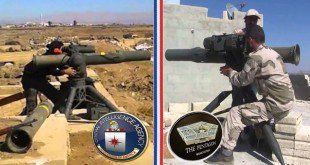 According to the report in the LA Times:

“The fighting has intensified over the last two months, as CIA-armed units and Pentagon-armed ones have repeatedly shot at each other while maneuvering through contested territory on the northern outskirts of Aleppo, U.S. officials and rebel leaders have confirmed.”

“In mid-February, a CIA-armed militia called Fursan al Haq, or Knights of Righteousness, was run out of the town of Marea, about 20 miles north of Aleppo, by Pentagon-backed Syrian Democratic Forces moving in from Kurdish-controlled areas to the east.”

The irony of two Syrian militia groups facing off with weapons supplied by separate factions within the US war machine highlights the extreme lack of forethought and critical planning between the Pentagon and CIA.

“This is a complicated, multi-sided war where our options are severely limited,” a US official, who wasn’t authorized to speak publicly on the matter, told the Times. “We know we need a partner on the ground. We can’t defeat ISIL without that part of the equation, so we keep trying to forge those relationships.” ISIL is an acronym for Islamic State.

But let’s be clear, the United States’s primary mission in Syria isn’t to defeat ISIL/ISIS; the US is engaged in a regime change operation in Syria meant to topple Assad, with the secondary mission being the containment of ISIS. Prior to the US meddling in Syria, ISIS was unheard of.

The Pentagon is training an almost 80% Kurdish force called the Syrian Democratic Forces to fight ISIS near the Turkish border, while the CIA has supplied anti-tank TOW missiles and other heavy armaments to Islamist rebel groups fighting Assad’s forces in the Aleppo area.

The actions of the Pentagon are in unison with the allied efforts of the international community to fight against the Islamic State, whereas the CIA mission is a completely covert effort meant to destabilize the Assad government in hopes of forcing regime change.

After financing, training, and arming these separate groups; the military/intelligence apparatus now has no means of controlling the US-backed Islamists as they work to hold and control territory on the ground.

The reality of US-backed militias in Syria fighting one another exposes a historic strategic pattern of chaos often employed as a means of destabilizing states with the intention of regime change.

So while it may appear as though US policy is failing as CIA and Pentagon-backed rebels face off, perhaps the true strategy of creating unending chaos within Syria until the Assad government can be sacked is playing out exactly according to plan.

The Free Thought Project reported on a video uploaded to YouTube last year that epitomizes the deadly absurdity of US foreign policy. In the video, a US TOW Missile is used to blow up a US Humvee.

Welcome to The Daily Wrap Up, a concise show dedicated to bringing you the most relevant independent news, as we see it, from the last 24 hours (12/06/18). As always, take the information discussed in the video below and research it for yourself, and come to your own conclusions. Anyone telling you what the truth Read More…