Update4: FBI Director Christopher Wray said during a Friday press conference that “these were not “hoax” devices,” and that Sayoc’s fingerprint was found on a package mailed to Rep. Maxine Waters (D-CA). DNA on two IEDs linked to a sample from a prior arrest of Sayoc helped capture him.

When asked if Sayoc acted alone, Wray said: “This is very much an active and ongoing investigation. We do believe that we’ve caught the right guy.”

FBI Director Christopher Wray speaking about the bombs sent to prominent democrats: “These are not hoax devices.” pic.twitter.com/UDRUFvnUT8

FBA Director Wray says 13 IED’s were sent, each one with PVC pipe, battery, wiring and other material.

“These are not hoax devices,” he says.

Update3: Suspicious packages were intercepted in California on Friday addressed to Sen. Kamala Harris and billionaire Democratic donor Tom Steyer, according to the Sacramento Bee.

The FBI and Sacramento County Sheriff’s Department are on scene at a post office in south Sacramento investigating the possibility that a mail bomb similar to a dozen others mailed to prominent political figures and news organizations around the country has been found there, authorities say.

“We are investigating reports of a suspicious package in South Sacramento,” sheriff’s spokesman Sgt. Shaun Hampton said. “It resembles the ones that have been reported throughout the country.”

The facility was evacuated and closed, and FBI and U.S. Postal Service investigators and the Sacramento Fire Department were at the scene. A robot was being used to go in and out of the facility, and sheriff’s deputies were going door to door in the neighborhood telling residents to stay inside. –Sacramento Bee

Update2: President Trump announced the apprehension and arrest, and says the suspect will be “prosecuted to the full extent of the law.”

FLASH: Cesar Sayoc, 56, pictured in this booking photo from an arrest, via @browardsheriff pic.twitter.com/zUSXxPlOyZ 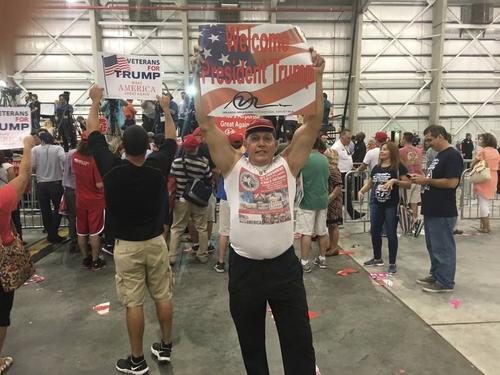 Federal authorities arrested a Florida man at approximately 10:30 a.m. Friday in connection with a spate of suspected explosive devices mailed to prominent Democrats and anti-Trump figures over the past week.

According to CBS Miami, the man, 56, was arrested in the Miami area after discovering DNA evidence and using cell phone data which led them to the suspect – reportedly at a Plantation Auto Zone in Broward County, miles away from the Sunrise, FL office of Congresswoman Debbie Wassermsan-Schultz – the return address on the mailed devices.

The Miami Herald, meanwhile, reports that the suspect is from Aventura and is being questioned by FBI agents along with the joint terrorism task force.

A law enforcement source tells the Miami Herald the arrest was made at an auto parts store in Plantation. Miami Herald news partner CBS4 reports a “loud explosion” was heard at the time of the arrest, possibly from an FBI flash bomb device. –Miami Herald

.@evanperez reporting this morning that the man arrested in connection with the pipe bombs, according to a law enforcement source, is in his 50s, with Aventura FL address. He has a criminal history and ties to New York, source says. 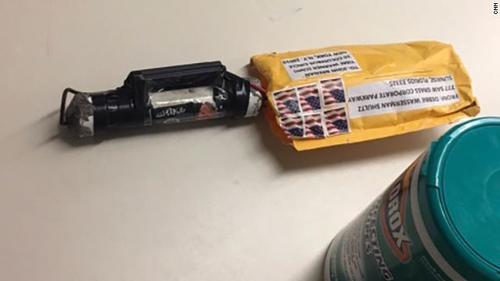 Suspect arrested in pipe bomb case had right wing & Trump stickers all over his van. His political affiliations are not yet confirmed, but one can get a pretty good idea from his targets. And his van stickers. https://t.co/xJpCACCNvf pic.twitter.com/XwrQq9Qqn8

And there you go. pic.twitter.com/BFx1Q5MrCo

Department of Justice Director of Public Affairs, Sarah Igsur Flores, confirmed that one person is in custody. A press conference is scheduled for 2:30 pm ET.

We can confirm one person is in custody. We will hold a press conference at the Department of Justice at 2:30pm ET.

I will be speaking at the Young Black Leadership Summit in 15 minutes where I will address the investigation into the bomb packages.

According to security and terrorism expert, David Videcette, the man has previously made “terroristic threats” and was under surveillance for the past 24 hours.

Man arrested is a white male in his 50s who was previously a New York resident and has prior for ‘terroristic threats’.

He’s been under surveillance for the past 24 hours.

Seems that’s his van in the shot here. Very interested to see what it says on the side… https://t.co/Z4G1QXLcfr 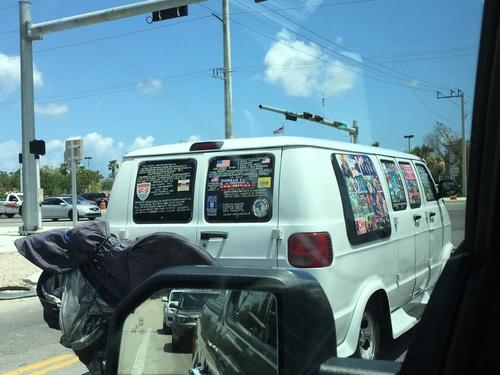 The arrest follows the interception of two more suspicious packages Friday morning, addressed to New Jersey Senator Cory Booker and former National Director of National Intelligence, James Clapper which was also addressed to CNN – bringing the total number of mailings to 13, after New York police say an X-rayed package revealed an object which appeared to be a pipe bomb.

BREAKING: Police official: X-ray of package found at NYC postal facility revealed object that appeared to be a pipe bomb

LATEST: 12 suspicious packages known to have been sent as of Friday morning at 9:15 a.m. ET:

The device for Booker was addressed to his Camden, New Jersey office but was intercepted in Florida, while the device addressed to Clapper and CNN was found in a Manhattan post office, which was evacuated in response.

“At apporximately 8:15 a.m. an alert postal worker who was aware of a series of suspected pipe bombs in packages going through the mail recognized a package that postal workers across the country had been warned about and shown photographs of in the system here at Radio City station,” said John Miller, NYPD Deputy Commissioner of Intelligence & Counterterrorism. “This area was secured while emergency service and the NYPD Bomb Squad responded. The package was isolated in the post office. The Bomb Squad was able to use their equipment to conduct an X-ray. Inside they saw what appears to be a pipe bomb consistent with other devices we’ve seen this week contained in a package consistent with the packaging we’ve seen this week.”

“My wife and I are away from home right now. And our neighbors have been retrieving our mail. Been very concerned about them. So in one sense, it’s kind of a relief, but it’s not a surprise,” he said. “This is definitely domestic terrorism. No question about it in my mind.”

Check back for updates

New revelations from WikiLeaks’ ‘Vault 7’ leak shed a disturbing light on the safeguarding of privacy. Something already known and largely suspected has now become documented by Wikileaks. It seems evident that the CIA is now a state within a state, an entity out of control that has even arrived at the point of creating its own Read More…

With the Syrian army’s liberation of the southwest complete, there remains just a single province in control of ISIS and al-Qaeda in the country. The “bloodbath” that the “experts” warned about if Assad regained control not only did not come to pass, but tens and hundreds of thousands of Syrians are returning home. Once the Read More…

According to the official narrative, the reason for the latest Gulf crisis in which a coalition of Saudi-led states cut off diplomatic and economic ties with Qatar, is because – to everyone’s “stunned amazement” – Qatar was funding terrorists, and after Trump’s recent visit to Saudi Arabia in which he urged a crackdown on financial Read More…