Early Sunday Syrian state media reported that a major gas pipeline running across the country’s center has been knocked offline due to a terror attack. The pipeline carries about 2.5 million cubic meters of gas to a processing plant and onward to other power stations.

The report indicated further that “technical workshops affiliated to the Petroleum Ministry started to work on fixing the gas pipeline in order to pump gas through it again over the coming hours,” and strongly suggested that “remnants of ISIS terrorists” conducted the attack.

In 2014 and 2016 ISIS militants briefly seized the Shaer fields, after which pro-government forces returned them to Damascus control in heavy fighting. The AP noted:

The SANA news agency didn’t name the attackers. The area in the central Homs province is close to where remnants of the Islamic State group are still holed up after losing all the territory they once held in the country.

Syria’s remnant and heavily weakened oil and gas infrastructure is vital especially considering aggressive oil import sanctions currently imposed on Damascus by the United States, as well as the fact that the country’s largest and most valuable oil and gas fields are still under the control of the US-backed Syrian Democratic Forces in Syria’s east. 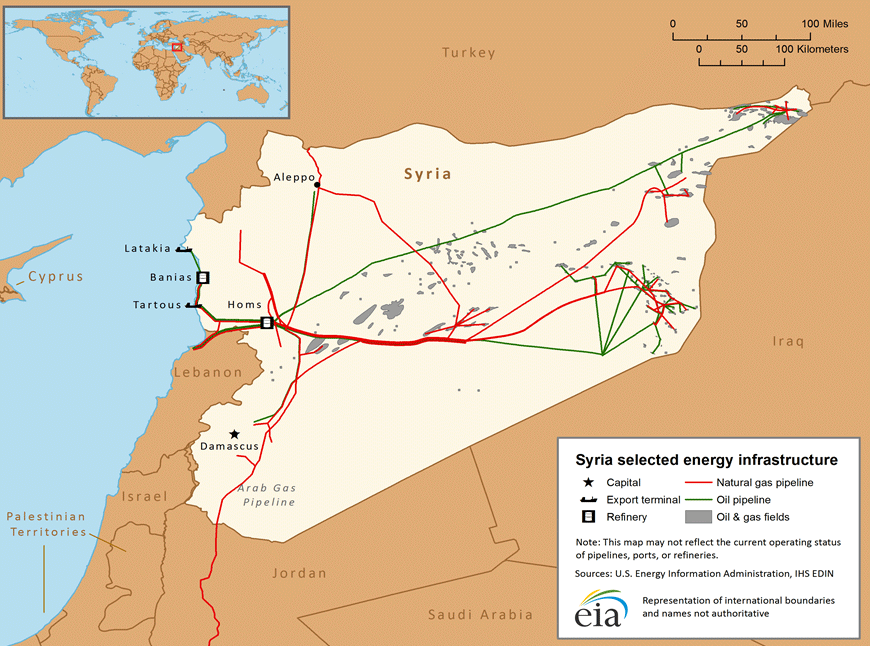 In an under-reported story late last month, Syria pointed the finger at either the US, Turkey, or Israel for “badly damaged” underwater oil pipelines in the eastern Mediterranean.

In what appears to be a deliberate attack on Syria’s oil industry, five pipelines were badly damaged on Sunday afternoon, the Syrian Oil Ministry reported.

“We were informed yesterday about an oil leak off Baniyas. Specialist divers of the Syrian oil company investigated it and found traces of external damage on five pipelines”, it said on Facebook.

Arabic media reports chronicled the damage from the prior underwater pipeline attack:

The reports of oil and gas pipeline “sabotage attacks” come as tensions between Iran and the US and its allies have been soaring over the past month in what’s increasingly looking like a “tit-for-tat” scenario of aggression focused on the region’s vital oil and gas infrastructure and transit points, including in Saudi Arabia and the gulf.

European Union Vows To Block US Sanctions On Iran

Top European Union officials say they “deeply regret” President Trump’s move Monday to start reimposing nuclear sanctions on Iran. The officials also have promised to block the US sanctions and preserve the deal. A joint statement offered by the various top-ranking foreign policy officials in the EU, the Foreign Ministers of the three P5+1 parties and the EU chief Read More…

Editor’s Note: Bottom line – The more munitions the military can go through, then larger their budget will be the following year; they are incentivized to be as wasteful and careless as possible, and the recent and dramatic uptick in civilian casualties make that shockingly apparent. Those who take issue with the Pentagon’s 1033 program — the avenue through which excess Read More…