America’s illegal war in the Syrian city of Raqqa has already killed over 1,800 civilians, according to the monitoring group Airwars. At the time the offensive was launched in June, the U.S. was aware that some 200,000 civilians were trapped. In that first week of operations alone, the U.N. accused the Trump administration of killing 300 civilians in less than seven days’ worth of bombing.

This trend has continued over the course of the last few months, and as one might imagine, Syrian infrastructure has been completely decimated. Rather than label this assault for what it is — namely, a grave crime against humanity encompassing an endless supply of potential war crimes — the media appears to have chosen a different tack.

“Looking at photographs of the ruined, desolate streets of what was once the Islamic State’s capital of Raqqa is a reminder of the overwhelming, pitilessly effective military power of the United States,” wrote the Washington Post’s David Ignatius in an op-ed published Thursday.

That was merely the opening sentence. Ignatius continued:

“The heaps of rubble in Raqqa that once housed terrorists and torturers convey a bedrock lesson, as valid now as in 1945: It’s a mistake to provoke the United States. It may take the country a while to respond to a threat, but once the machine of U.S. power is engaged, it’s relentless — so long as the political will exists to sustain it.” [emphasis added]

Who exactly provoked the United States here? The people who have been hardest hit are clearly civilians who happened to live in Raqqa. What crime did these people commit?

And if Ignatius is referring solely to the terror group ISIS, at what stage did ISIS “provoke” the U.S.? If anything, ISIS was quite content trying to topple the governments of Iraq and Syria and set up their own Islamic caliphate back in 2014. That is why the Syrian government has been so heavily involved in fighting ISIS over the last few years: ISIS directly threatens its territory. Somehow, the U.S. found itself embroiled in yet another Middle Eastern conflict that didn’t directly affect the U.S. government or its people.

Nevertheless, Russia used this opportunity to turn the tables against the U.S. after western media lambasted Russia’s assault on Aleppo at the end of last year. On Sunday, Russia accused the U.S.-led coalition in Syria of wiping the city of Raqqa “off the face of the earth” with carpet bombing similar to what the United States and Britain did to Germany in 1945. 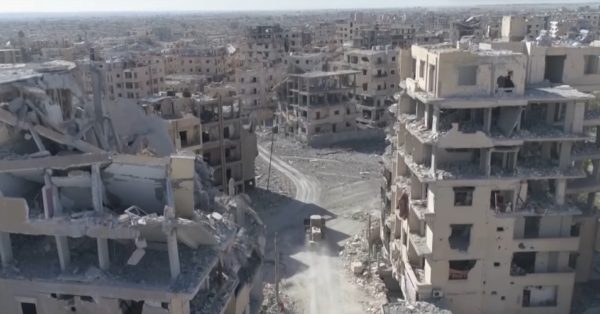 However, unlike the U.S., Russia had a legal basis to begin its military operations within the country, whether or not it committed war crimes in the process.

David Ignatius is right about one thing and one thing only – the media is almost all but silent on what is going on in Raqqa. However, Ignatius wrongly attributes this to the “inevitable nature of American force” that has prompted so little discussion. In reality, it’s likely this topic isn’t being discussed because of the numerous illegalities surrounding it.

The people of Raqqa won’t forget what the U.S. has illegally done to their homes. In July, one witness told Reuters he found several of his neighbors dead on the street. Cats were eating their bodies. It later emerged that American-led airstrikes were wiping out entire families. This is not how you defeat terrorism. This is how you perpetuate it.

Corporate media would do well to separate itself from this violent and grotesque criminal behavior, yet it continues to endorse it. If RT released op-eds that glorified Russian crimes to the extent that western media is doing right now, the Washington Post would have a field day.

This is not the hallmark of an independent press, but rather, one that serves horrifyingly violent policies. An independent media would question both Russia’s and America’s roles in the Middle East, objectively distinguish between the two, and demand both entities be held accountable for failing to protect civilians when that evidence arises.

All that being said, Airwars has more or less put its monitoring of Russian airstrikes on hold this year as the U.S. has continued to surpass Russia in its civilian death toll by a long shot.

The Secret House Memo And “Rescue From Above”

The theme: Something starts off as fairly reasonable, and then is blown out of all proportion. First, a brief recap on the secret House memo—not available to the press or public—and the reaction to it. Purportedly, the memo will reveal that Democrat operatives—some inside the FBI and the DOJ—feloniously used a fake and fabricated “Trump Read More…

The Root Of The Crisis: Every $1 Of Debt Generates Just 44c Of Economic Output

Exactly ten years ago, in the middle of the summer of 2008, the world was only two months away from the most severe financial crisis since the Great Depression. At the time, the size of the US economy as measured by Gross Domestic product was around $14.8 trillion– by far the largest in the world. Read More…

Over the weekend, US warplanes carried out at least six airstrikes against the coastal town of Gandarsh, Somalia. US African Command (Africom) says 62 people were killed in the strikes, and all were “terrorists” from al-Shabaab. 34 people were killed on Saturday, and 28 more on Sunday. The identities of the slain are not clear, and Read More…