Over the weekend we posted about how the media’s coverage of Trump and Clinton’s health had become “outright bizarre” (see “American Electorate Loses As Partisan Media Coverage Of Candidate Health Turns Outright Bizarre“).  We also asked whether Google had taken measures to censor searches related to Hillary’s health condition (see “Is Google Censoring Search Results To Protect Hillary?“).   Turns out that the Huffington Post may have just joined in on the bizarre behavior by censoring a journalist with the audacity to question Hillary’s health.

On Sunday night, an obviously shaken Huffington Post contributor, David Seaman, posted a video to YouTube after the HuffPo had taken measures to revoke his publishing access and delete two articles he had previously published on Hillary’s health…a move that left him “a little scared” and “spooked out”.

According to Seaman, he has a long standing relationship with the Huffington Post which has included “100’s of successful articles” that have been published under the banner.

Seaman reported the move by Huffington Post by live streaming a video of his reactions on YouTube (full video below).

“Huffington Post, where I was a contributor, they have revoked my publishing access and they’ve deleted both of my articles that were published earlier over the weekend.  Both of my articles have been pulled without notice of any kind.  Just completely deleted from the internet.  And both of those articles mention Hillary’s health which is both a hashtag on Twitter and I linked to a video that a YouTuber, Paul Joseph Watson, had uploaded back on August 4th showing signs that Hillary Clinton’s health is quite poor.”

“Whenever a video concerning a presidential candidate’s health is viewed more that 3.5 million times somebody who is under contract to the Huffington Post and AOL should be able to link out to that.“

Seaman goes on to point out that completely removing a published article from the internet is unprecedented and leaves him “a little scared” of being the next person to be “vanished” for criticizing the Clinton campaign.

“I’ve honestly never seen anything like this.  This is happening in the United States in 2016.  It’s frankly chilling.  I’m a little scared.  I’m doing this video also to say, I’m not suicidal right now; I am not a particularly clumsy person; I don’t own a car at the moment.  So if I’m to slip in the shower over the next couple of days or something silly like that you have to really employ probability and statistics here because I’m not a clumsy person, right, and I’m also not a depressed person right now.  I’m a person who is spooked out though.”

“For Huffington Post to delete those posts without any notice, that is Orwellian.  That is something I’ve read about happening in mainland China.“

Fortunately, we’ve discovered a cached version of one of the articles published by Seaman (which can be read here).  In it, Seaman questions whether his readers truly believe Hillary to be healthy noting that he can’t express an opinion because he “needs to keep [his] job and platform.”  Seaman goes on to point out that “we all know what happens when you speak a little too much truth about the Establishment-beloved Clintons.”

I realize some readers might be wondering after watching Paul Watson’s video… how is she strong, or healthy, after seeing all that?

Look guys, I need to keep my job and platform. A lot of people read the Huffington Post and AOL properties. We all know what happens when you speak a little too much truth about the Establishment-beloved Clintons.

Unfortunately for Seaman, it turns out that even posing a question about Hillary’s health is a little too much for the Huffington Post. 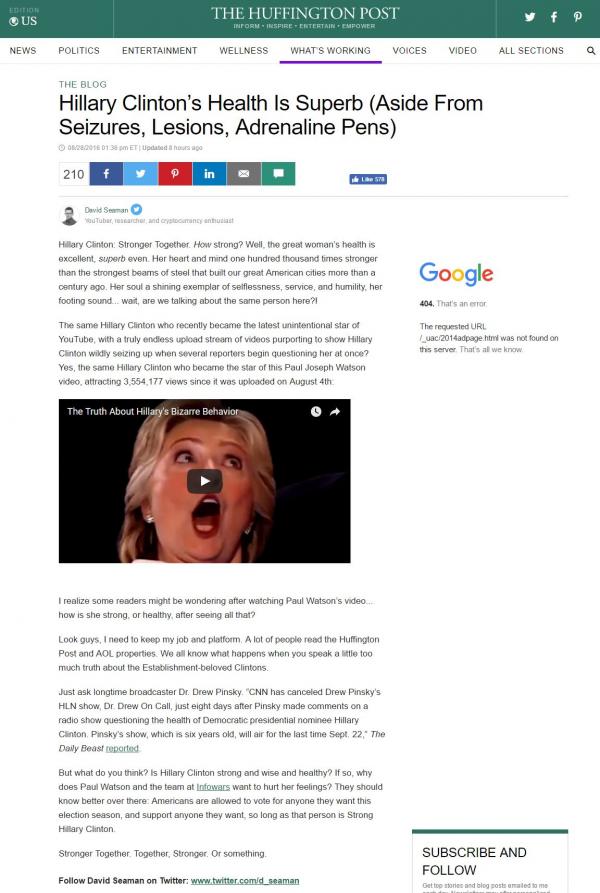 And, just for good measure, here is Paul Watson’s original video posted on August 4, 2016.  Sure enough, the video is up to 3.6mm views and counting.

The Trump Administration has announced Friday, along with a new round of sanctions against members of the Venezuelan government, that they are dispatching US military aircraft carrying aid to the Venezuelan border. The aid can’t get into Venezuela directly, as it is being sent to opposition leader Juan Guaido and with an eye specifically toward endorsing Read More…

Record “Wealth” In America? 72% Of US Businesses Are Not Profitable

Foreign Policy with Robert Inlakesh – What Will A Biden Presidency Mean For Palestine-Israel?

Welcome to Foreign Policy with Robert Inlakesh. In this show Robert dives into some of the most important foreign policy discussions of today while highlighting the most important information – primarily that which is missed, excluded or misrepresented by the MSM. Video Source Links: BIDEN TWO STATE SOLUTION- https://www.jpost.com/american-politics/biden-we-must-press-israel-not-to-make-the-2-state-solution-impossible-627093  IM A ZIONIST- https://www.middleeastmonitor.com/20200314-zionist-biden-in-his-own-words-my-name-is-joe-biden-and-everybody-knows-i-love-israel/  FINAL STATUS Read More…