Supporting an anti-establishment candidate, as the 2016 election cycle has thus proven, at best amounts to little more than a maddening exercise in futility. Yet, droves continue flocking to the polls, ignoring that fixing a corrupt, authoritarian system by validating it through participating in its carrot-on-a-string illusion will somehow — this time — all work out for the greater good.

Though participation through voting might offer the feeling of power and control — as well as comfort in the illusion — the establishment maintains a thorough stranglehold on the current system, by design. If you’re still unconvinced, consider the evidence thus far — some blatant, some subtle — found in virtually every primary and caucus this year.

To grasp how arbitrarily the popular vote can be manipulated to fit the establishment’s intended outcome, the Iowa caucus would be a good place to start. As if insufficiently trained volunteer staff, voter confusion, inadequate voter registration forms, and general disorganization weren’t telling in themselves, in multiple locations the awarding of delegates came down to coin tosses — literally.

While described as “the closest Democratic caucus in Iowa history” by the state’s Democratic Party, according to Salon, apparently the same Party felt the need to give Hillary Clinton an advantageous edge. One of Bernie Sanders’ delegates was sneakily awarded to Clinton amidst the confusion, but the Iowa Democratic Party didn’t bother to inform the precinct secretary it had done so. It then refused, despite the somewhat suspect happenings, to perform an audit.

“What happened Monday night at the caucuses was a debacle, period,”The Des Moines Register penned in an editorial afterward. “Democracy, particularly at the local party level, can be slow, messy, and obscure. But the refusal to undergo scrutiny or allow for an appeal reeks of autocracy.”

Though Nevada didn’t have to resort to its deck-of-cards method to figure the awarding of delegates — as Iowa had done with its coin tosses — that didn’t stop anecdotal picture and video evidence from proving rampant issues and possible fraud.

Inexcusably hours-long lines, a lack of paper ballots, and poorly trained election workers meant general disenfranchisement pervaded caucus locations. The situation so outraged voters, it was characterized a “fiasco.” Those who did manage to procure a ballot discovered Clinton propaganda in plain sight; though electioneering is prohibited at polling locations, one Reddit user posted a photo of a sign-in sheet emblazoned with the Hillary for Nevada logo at the top. Asked for an explanation, the poll worker handing out the not-at-all neutral sign-in claimed it was “for the democratic party,” US Uncut reported. 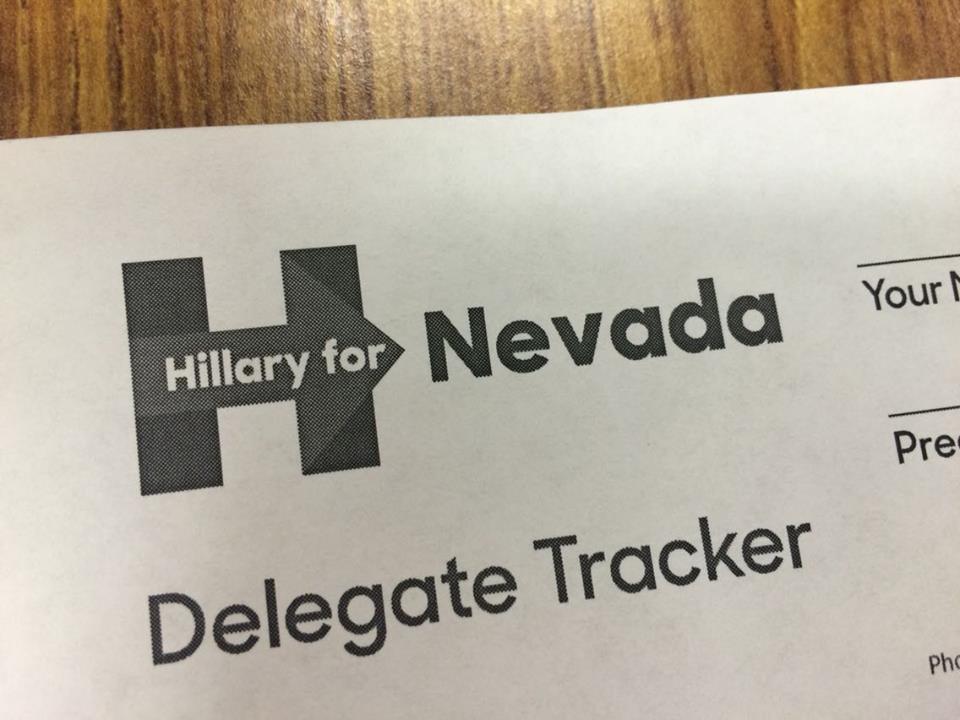 Worse, a Twitter user discovered Hillary supporters allowed to caucus without registering, to which a precinct volunteer offered the rather effrontery explanation that they’d be permitted to register after casting a ballot — and it was all captured on video.

Worse still, another Reddit user claimed a poll volunteer registering new Democratic voters automatically marked them as favoring Clinton — and not only seemed stubbornly hesitant to correct the error, but later appeared working for the “Hillary group’s tables.”

Chaos in the Republican caucus mirrored that in the Democratic event, including reports of ballot mismanagement; one was allowed to fall to the floor and was ripped up by a volunteer unsure of its validity. Another witness tweeted “some guy voted for trump twice.” Caucus volunteers, who are required to forego campaign gear, sported Trump paraphernalia and, as another Twitter user claimed, were “Actively bullying folks. Not checking IDs.”

Super Tuesday’s primaries and caucuses offered no relief to the election madness, as Colorado and Massachusetts, in particular, similarly devolved into messy embarrassments.

Polling sites for the Democratic caucus in Colorado seemed to arbitrarily switch locations, voters were turned away upon arrival, volunteers were unprepared, and, in one case, a private residence intended to be a caucus location met voters with a locked door.

So marred by troubles was the situation in Colorado, one Twitter user asserted, “I honestly cannot say enough negative things about the caucus system. Disorganized, undemocratic, just generally bad. Primary please!” Another voter summarily tweeted, “The caucus process in Colorado is bullshit!” Indeed, after the debacle, swaths of voters called for a return to the primary system, which had been in place until 2002.

Massachusetts saw an appearance by Bill Clinton, who took advantage of the opportunity to electioneer for Hillary, both inside and outside polling locations in a likely illegal violation of state law. So egregious and unusual was the situation, Massachusetts Secretary of State William Galvin told the New York Times his office “had to remind some of our poll workers that even a president can’t go inside and work a polling place. He can go in, but he can’t approach voters.”

A petition created afterward calling for Bill Clinton’s arrest and prosecution has since garnered over 127,000 signatures.

While not fraudulent, the Republican Party garnered its own firestorm of criticism by eliminating the popular vote from the nominating process — much to the ire of Trump supporters. As the Denver Post explained:

“Colorado GOP leaders canceled the party’s presidential straw poll in August to avoid binding its delegates to a candidate who may not survive until the Republican National Convention in July.”

“The people of Colorado,” Trump, in part, proclaimed afterward on Twitter,“had their vote taken away from them by the phony politicians.” Later, Trump expounded further, declaring in an interview, “The system is rigged. It’s crooked.”

To wit, the Colorado GOP hubristically boasted on Twitter, “We did it. #NeverTrump” — but likely realized the potentially damning repercussions of its candor and swiftly deleted the tweet. 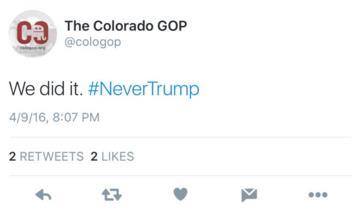 “We’ve received complaints throughout the whole day of lifelong Democrats showing up to the polls and being told they are either independent or have no party affiliations,” stated Arizona Democratic Party spokesman Enrique Gutierrez, according to the Phoenix New Times.

Though locations across Arizona experienced massive voter turnout — which, as in many states before, overwhelmed grievously unprepared volunteers — Maricopa County, home of Phoenix, reported average wait times of up to 90 minutes. Long waits had been anticipated, to an extent, as Maricopa County Recorder Helen Purcell had drastically cut the total number of polling places from 200 four years ago to just 60 — questionably citing expected low voter turnout for the reduction.

To grasp the magnitude of difficulty this presented, one person tweeted,“Most counties I surveyed had enough polls for 2.5K or fewer voters per site. Maricopa County? 20,833 voters per polling site.” A local NBC affiliate reporter also noted on Twitter:

“In my district, there is only one polling place,” Democratic State Senator Martin Quezada noted in a written statement, cited by AZCentral.com. “In my neighboring district, LD 30, there are no polling places.”

In what could only be dubbed a farce, so copious were the complaints lodged about the New York City primary, city Comptroller Scott Stringer announced the Board of Elections would be the subject of an audit — hours before the close of polling. In fact, before voting even commenced, over 126,000 voters had been wholly purged from the records.

“Of particular concern are numerous allegations of widespread removal of eligible voters from voter-registration rolls, as well as instances of incorrect party affiliations on individual registration records. These errors have conspired to bar first time and longtime voters from exercising their fundamental democratic right.”

Mayor Bill de Blasio swiftly backed the call for an audit, and despite repeated denials from Ryan any major issues had tarnished the day, State Attorney General Eric Schneiderman claimed his office had received “by far the largest volume of complaints” from any election since 2011, according to Politico. Both the comptroller’s and attorney general’s offices began investigations following the debacle.

A top official for the NYC BOE has since been suspended without pay and an internal investigation has been launched over discrepancies in voter records and purging of voter rolls in Brooklyn.

This list is woefully incomplete — Ohio is now investigating its primary, and Sanders managed to lose Wyoming, despite winning by a margin of 12 percent; this article didn’t even delve into superdelegates. Even so, the pattern of suspicious activity before, during, and after elections presents clear evidence many have not been willing to admit.

Your vote — if you’re able to jump enough hurdles to cast it — doesn’t matter. But worst of all, this farce of an election simply amounts to a theater of illusion, designed to distract people who might otherwise realize the change they seek through politicians could best be implemented by all of us, now, without needing to validate the very system of our modern-day enslavement.

Welcome to The Daily Wrap Up, a concise show dedicated to bringing you the most relevant independent news, as we see it, from the last 24 hours (7/18/18). The efforts to keep the American people engrossed in the US political theater have never been so pronounced and so all-encompassing. It has reached a point where Read More…

The deep irony of the tragic Syria war is that after seven years of massive bloodshed, as the government has emerged victorious, it is only now with relative stability and ensuing calm over most of the country that an “economic siege” has hit the population with full force.  Damascus even during some of the worst years of war was always a Read More…