The FBI has asked retired Australian policeman-turned investigative journalist, Michael Smith, to provide information he has gathered detailing multiple allegations of the Clinton Foundation receiving tens of millions of mishandled taxpayer funds, according to LifeZette.

“I have been asked to provide the FBI with further and better particulars about allegations regarding improper donations to the CF funded by Australian taxpayers,” Smith told LifeZette.

Of note, the Clinton Foundation received some $88 million from Australian taxpayers between 2006 and 2014, reaching its peak in 2012-2013 – which was coincidentally (we’re sure) Australian Prime Minister Julia Gillard’s last year in office.

Smith names several key figures in his complaints of malfeasance, including Bill and Hillary Clinton and multiple Australian government officials – including senior diplomat Alexander Downer, whose conversation with Trump aide George Papadopoulos that Russia had ‘dirt’ on Hillary Clinton allegedly launched the Trump-Russia investigation (as opposed to the Fusion GPS dossier, of course).

Related Reading: The Clinton Merry-Go-Round: Will The Clintons Actually Be Held Accountable?

Within hours of the NYT publication, the paper was immediately shredded as the information Papadopoulous told Downer was already public.

The materials Smith is giving to the FBI focus on a 2007 memorandum of understanding (MOU) between the Clinton Foundation’s HIV/AIDs Initiative (CHAI) and the Australian government.

Smith claims the foundation received a “$25M financial advantage dishonestly obtained by deception” as a result of actions by Bill Clinton and Downer, who was then Australia’s minister of foreign affairs.

Also included in the Smith materials are evidence he believes shows “corrupt October 2006 backdating of false tender advertisements purporting to advertise the availability of a $15 million contract to provide HIV/AIDS services in Papua New Guinea on behalf of the Australian government after an agreement was already in place to pay the Clinton Foundation and/or associates.”-Lifezette

As a reminder, the Australian government announced that they would stop pouring millions of dollars into accounts linked to the Clinton charities in November of 2016 – right after Hillary Clinton lost the election.

The federal government confirmed to news.com.au it has not renewed any of its partnerships with the scandal-plagued Clinton Foundation, effectively ending 10 years of taxpayer-funded contributions worth more than $88 million.

The Clinton Foundation has a rocky past. It was described as “a slush fund”, is still at the centre of an FBI investigation and was revealed to have spent more than $50 million on travel.

Despite that, the official website for the charity shows contributions from both AUSAID and the Commonwealth of Australia, each worth between $10 million and $25 million.

A third complaint by Smith revolves around a “$10 million financial advantage dishonestly obtained by deception between April 1, 2008, and Sept. 25, 2008, at Washington, D.C., New York, New York, and Canberra Australia involving an MOU between the Australian government, the “Clinton Climate Initiative,” and the purported “Global Carbon Capture and Storage Institute Inc.” 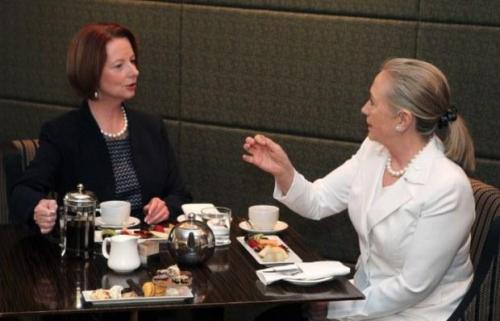 When asked why the Clinton Foundation was chosen as a recipient of Australian taxpayer dollars, a spokesman for the Department of Foreign Affairs and Trade said that all funding was used “solely for agreed development projects” and Clinton charities have “a proven track record” in helping developing countries.

Congresswoman Says US Is Arming ISIS, Introduces Bill to Stop It

Democratic Congresswoman Tulsi Gabbard has broken free of the corporate media’s narrative by accusing the United States of funding and arming terror groups al-Qaeda and ISIS. “If you or I gave money, weapons or support to al-Qaeda or ISIS, we would be thrown in jail,” Gabbard tweeted on Saturday. If you or I gave money, Read More…

After generations of being a black hole down which money goes, never to return, a team of 1,200 auditors tried to give the Pentagon its first ever comprehensive audit, just to see where all that money went. Unsurprisingly, it went poorly, and was declared a failure. How bad the failure was is something of a mystery Read More…

Welcome to The Daily Wrap Up, a concise show dedicated to bringing you the most relevant independent news, as we see it, from the last 24 hours (12/4/20). As always, take the information discussed in the video below and research it for yourself, and come to your own conclusions. Anyone telling you what the truth Read More…