For all the noise out of the mainstream corporate media about “fake news,” it didn’t take long for a mass knife attack at Ohio State University on Monday morning to morph into widespread reporting of an “active shooter.”
Initial reports, echoed across the corporate media landscape, described the attack as a shooting — when in reality law enforcement sources later confirmed it was a knife attack.

This phenomenon highlights exactly how the “fog of war,” and rush to be the first to report on a story, can result in a story being reported fallaciously. Of course, the narrative sold by the mainstream is that alternative media is unreliable, and thus, corporate media must be relied upon as the standard bearers of “truthful and legitimate” information. 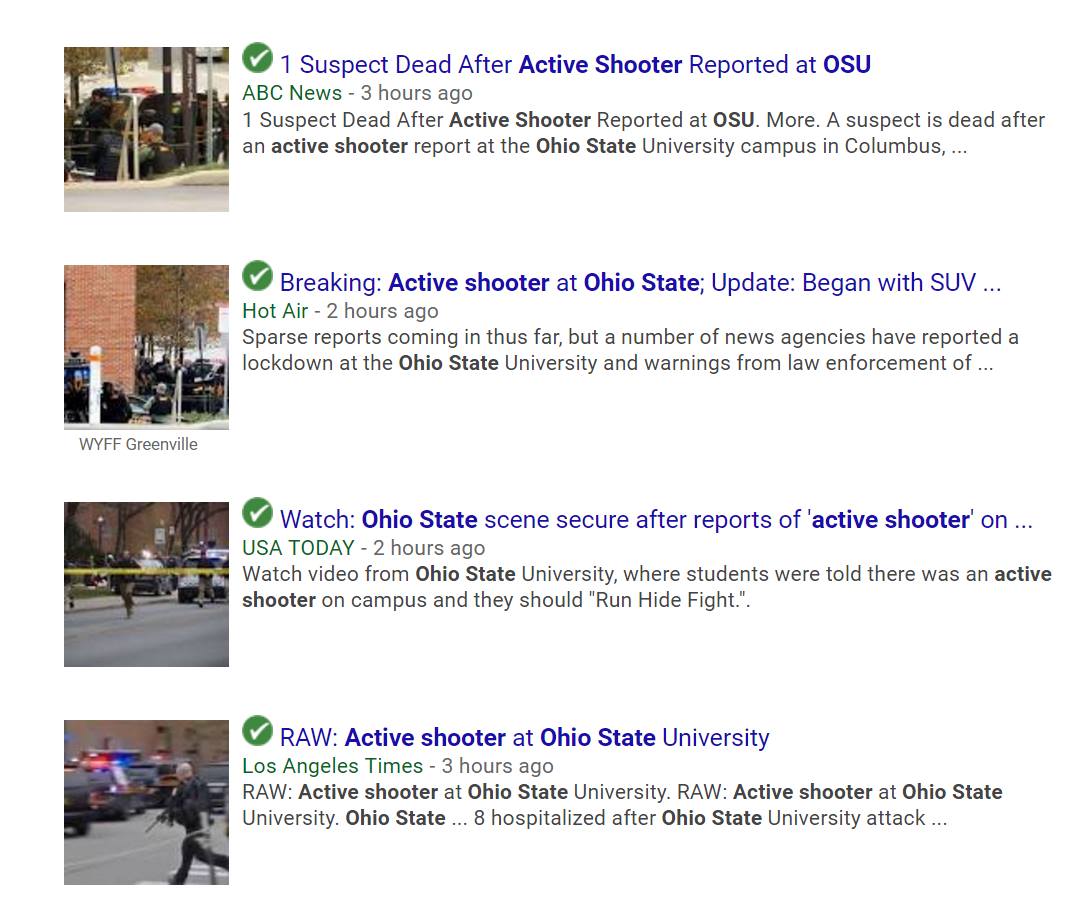 Obviously, this type of wildfire reporting of false information across the whole of mainstream media calls into question the veracity of the reporting and fact checking done by these mainstream outlets that are so quick to call independent news “fake.”

See how that works?

Unsurprisingly, only minutes after news broke that there was an alleged active shooter, calls across the social media universe for stronger gun control began, due to the false reports of an active shooter. Liberal opportunists on Twitter were quick to blame the knife attack on lackluster laws gun control laws.

Today is yet another was a sad day in our country because of a senseless shooting at an Ohio State University.

Authorities later clarified it was a knife attack that took place at OSU, but only after the mainstream media ratcheted up the emotions of the anti-gun crowd with false allegations of a mass shooting attack.

According to The Daily Caller, contrary to initial reports of a shooting, the attacker used a car and knife. The campus is secure and classes have been cancelled. The eight people taken to the hospital reportedly have non-life-threatening injuries. Columbus police confirmed the attacker was killed.

This case highlights exactly how the spread of “fake news” most often takes place. Contrary to what the mainstream media would like you to believe, it’s not independent media outlets making up “fake news” stories that threaten our nation, but rather the corporate media’s propagandizing of the American public to simply believe what is parroted without investigation or inquiry.

Should all these media outlets now be put on a list and subsequent google plugin, and censored on social media for reporting false news? The answer is no.

Censoring any information stifles the ability for people to form independent thoughts and all views — no matter how vitriolic and hateful — have an equal right to be heard.

Censorship ends in logical completeness when nobody is allowed to read any books except the books that nobody reads. –George Bernard Shaw

A recent USAID audit report found that some of its humanitarian programs for war-torn Syria and Iraq might have assisted terrorist groups. The assistance in question amounts to nearly $700 million. The agency in charge of foreign aid provided by Washington has done a poor job to mitigate risks for its projects to end up Read More…

While the IDF and Israeli government have suffered few — if any — consequences for their excessive use of force against Gazan demonstrators, the Great Return March and the Israeli response has caused a notable shift in favor of Palestinian rights at the international level. GAZA CITY — During a non-violent commemoration of the beginning of Read More…