Secretary of State and former CIA Director Mike Pompeo said during a hearing before the House Foreign Affairs Committee today that he does not believe there is a deep state in the CIA, the State Department or the Department of Justice, which is the same as a mob boss saying he doesn’t believe there is organized crime in the Mafia.

California Rep. Ted Lieu, himself a virulent Russiagater and aggressive defender of the US intelligence community, asked Pompeo if he believed there was a “Criminal Deep State” at the State Department in reference to a recent tweet by America’s reality TV president.

“I haven’t seen the comments from the president. I don’t believe there is a deep state at the State Department,” Pompeo said.

“You formerly served as CIA Director,” Lieu continued. “Do you believe your colleagues at the CIA are part of the Criminal Deep State?”

“You know, this term ‘deep state’ has been thrown around — I will say this, the employees that worked for me at the CIA, nearly uniformly, were aimed at achieving the president’s objectives and America’s objectives,” Pompeo responded.

“And that’s your experience when you interact with colleagues at the FBI and the Department of Justice as well?” Lieu asked.

It was like watching a two-handed puppet show about two swamp monsters furiously agreeing with one another that there is no swamp.

This would be the same Mike Pompeo, by the way, who promised that he would make the depraved, lying, torturing, propagandizing, drug trafficking, coup-staging, warmongering CIA into a “much more vicious agency.” The same Mike Pompeo who just the other day stood before a plutocrat-funded DC think tank declaring an effective regime change policy against Iran, citing its government’s human rights violations while ignoring the human rights violations of the Saudi Royals which were making headlines that same day.

I hardly ever use the term “deep state” anymore. For a time it was a sensible label to use within smaller, well-informed circles to refer to the unelected power structures which remain in America regardless of the shifting tides of its official elected government, but ever since it became a mainstream household term it’s been rendered meaningless by partisan hackery.

Democrats meanwhile proclaim that talk of a deep state in America is a baseless conspiracy theory, which is an innately absurd position. Deep state is not a conspiracy theory, it’s a concept used in political analysis to describe the ways that unelected power structures like multinational plutocrats and intelligence/defense agencies tend to collaborate with one another in order to advance their own agendas. The fact that such plutocrats and agencies (A) exist, (B) have power, (C) are unelected, (D) tend to form alliances with each other and (E) try to advance their own agendas is not disputable; the only thing you can dispute is the nature and extent of their operations.

These would be the same Democrats, by the way, who have spent the last year and a half fanatically defending US intelligence agencies and canonizing J Edgar Hoover heirs James Comey and Robert Mueller as living saints.

Look how things have turned around on the Criminal Deep State. They go after Phony Collusion with Russia, a made up Scam, and end up getting caught in a major SPY scandal the likes of which this country may never have seen before! What goes around, comes around! 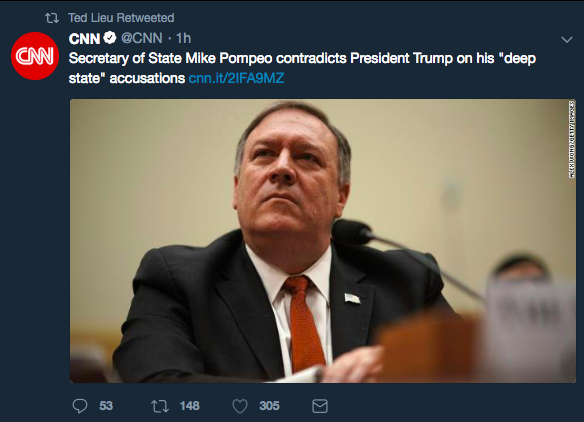 Obviously there is a deep state in America, obviously it is extremely powerful, and obviously men like Donald Trump and Mike Pompeo are some of its most valuable foot soldiers. But partisan echo chambers have most Americans so blinkered that they can only see one of two halves of the equation: either the US intelligence community is a plucky band of virtuous patriots resisting a president who is simultaneously (A) stupid, (B) crazy, (C) a Nazi, and (D) a Kremlin agent, or Trump is a populist hero of the people who is fighting the deep state. Through the filters of partisan idiocy it’s impossible to see the otherwise obvious fact that unelected power dominates the United States, and that Donald Trump is in full service of that unelected power.

But more and more people are seeing through the illusion. More and more are asking the right questions about why US presidential administrations seem to advance more or less the same policies regardless of political affiliations. It isn’t necessary to use the now-useless phrase “deep state” to point to these dynamics. They’re becoming more and more self-evident by the day.

In this rare video, two high-ranking Bush Administration officials reveal the terrible truth about 9/11, Iraq, and all the other countries the West has invaded since then… This video could help destroy any lingering illusions that the chaos currently engulfing the Middle East is just a tragic twist of fate. According to retired US Army Read More…

In its near decimation of North Korea, the United States tried to spread diseases like bubonic plague, dropped 32,500 tons of napalm, and killed nearly 3 million people. It’s sort of silly that it matters. The United States bombed North Korea flat with ordinary, non-bioweapons bombs. It ran out of standing structures to bomb. People lived Read More…

Welcome to The Daily Wrap Up, a concise show dedicated to bringing you the most relevant independent news, as we see it, from the last 24 hours (10/19/19). As always, take the information discussed in the video below and research it for yourself, and come to your own conclusions. Anyone telling you what the truth Read More…