Throughout the entire 2016 election process, the people were overtly and ostentatiously lied to, by almost the entirety of mainstream media, about anything that did not line up with what the establishment wanted to happen; that Clinton would win; that Clinton was leading the polls; that Russians were manipulating the outcome …  all of which is categorically and substantially untrue(it is also important to note that this is not a new occurrence, but rather the way is has been for some time, and the majority of people are only now beginning to truly see it).

Clinton and her campaign were calling out Donald Trump during the last debate(still absurdly preparing for the win and clearly brainwashed by their own propaganda), by asking if he and his supporters would fully except the “will of the people” and the outcome of the beautifully “democratic“ election that was about to come to an end. And Clinton could hardly contain her outrage and disgust as he calmly said “he would consider it at the time.”

“Sometimes you win, sometimes you lose, uhh but I uh, will certainly support the outcome of this election.”

Well it seems the tables have turned, and lo and behold, it is the Clinton camp that is outright refusing to accept the country’s political process(albeit a very crooked and corruptible process) and its election results. The argument is one that both sides can certainly agree on, as this was the very same argument being made by the Trump supporters when they thought Clinton was going to win, no doubt swayed by the same fraudulent polls which confused and misled the rest of the country. The argument being that the election is not only corruptible, but corrupted; that this election was not decided by the American people, but by outside interests and the influence of money. Which would seem to be a system in which a Clinton presidency would have been all but certain, as many indeed thought, but clearly, that’s not what happened.

Say for a moment that Clinton had won. What headlines would we be seeing instead?

“Clinton Pardons Self As Investigation Of Self Is Concluded”

Yet, with the same circumstances, and same argument–the only difference being who actually won–this should clearly demonstrate that this outrage, being broadcast on many outlets, has naught to do with morals, principles, or values, but only a selfish desire for their team to win and a ridiculous level of poor sportsmanship shrouded in a false sense of integrity and high-mindedness; like a pouting child saying, “its my ball, and I’m going home.”  Exactly what was being predicted by Clinton and her ragtag team of mainstream lackeys about Trump and his followers, in the event that her corrupt methods won out. This includes the media outlets currently calling for such extreme measures, of which they would have condemned should the outcome have been different–only further showing the American people that much of the media today is no more than stenographers relying what they are told.

The hypocrisy is almost too much bear, as many are even calling for the Electoral College to disregard the majority of their respective states, and the corresponding electoral votes, and to simply elect Clinton on December 19th instead. Now Clinton did win the popular vote, but as we have seen many times in this nation’s past, that does not always decide who will win the electoral votes, which, weirdly enough, is what really matters in a US election. The Electoral College is no doubt an institution that undermines the will of the people, but it is currently in place, and has been calling US electoral votes for hundreds of years. Clinton followers would surely have no issue with it had the system labeled her the victor, which means that making an issue of it after the fact is a desperate attempt by her supporters. And Clinton herself would have most certainly heralded the honor and efficiency of such an institution, had the election gone her way.

The sad fact is that both sides cheated, or attempted to cheat, possibly only because they knew the other side would cheat, and that is just the way politics work in the USA. This does not make any of it right, and indeed it’s all wrong, but that’s a topic for another article. The point of the matter is this: This system is rigged, but they all know that, and work to rig it in their own favor. So bringing it all out into the open, more so anyway, in an attempt to steal back the stolen win, would indeed be in the spirit of the rest of American politics, but is certainly not what this country needs, nor what it truly wants, as the election results have shown.

In the past, the President Elect, would take office, knowing his corrupt methods beat out his opponent’s, and the loser, would honorably concede, knowing that he was bested by the corrupt methods and cheating of his counterpart. This is America, and we have a right to cheat! Or at least a right to combat his cheating with my own! Don’t we?

That is at least how some would justify such an abhorrent disregard for the governmental system that is still held in such high esteem by many Americans, and once, the rest of the world. But that is the way of it today, and WikiLeaks has made that abundantly clear. What this shows us, is that Clinton has managed to so thoroughly brainwash her followers that they do not even take notice of the walking hypocrisies they have become by choosing to ignore the “democracy” they so fervently claimed Trump and his “basket of deplorables” would disrespect. One can no more hold Clinton personally accountable for the actions of her supporters than Trump can be held accountable for his, yet that was precisely what was happening during the election, and what would have certainly continued had Clinton won, and Trump supporters taken to the streets as the Clinton camp is now. 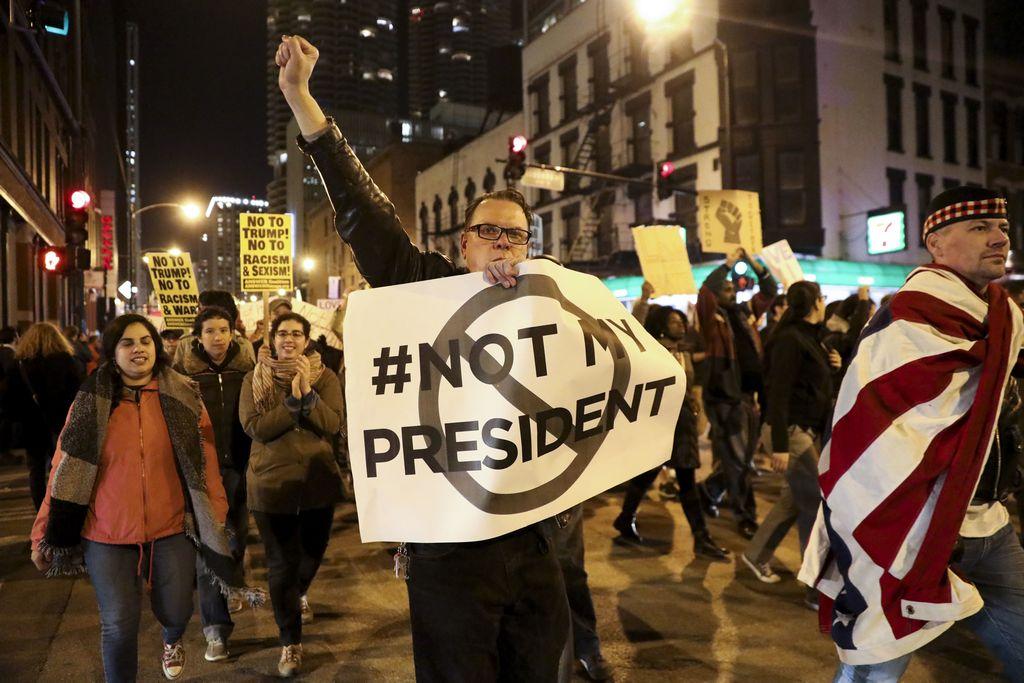 With little to no hint of the contradiction they now represent, they are outright calling for the suspension of what little democracy this country has left, if any at all, by asking the Electoral College to ignore hundreds of years of elections and the 12th Amendment itself, so they can have their Clinton win, and more war, as you can’t have one without the other. This faction of Clinton enthusiasts are only hurting this country and further pushing the divide many had hoped would subside following the election results; and maybe that is the intent.

Those with their billionaire fingers deep into the domestic and foreign policy of this county have been manipulating outcomes for generations; and one election will not bring an end to their long-term goals. Some are possibly attempting to do good with their influence, yet many and more are attempting to create change that benefits solely their pocketbook and personal standing, and not the well-being of Americans. Politicians in this country are happy to sell out the American people to be considered an “insider,” and add a little extra money to their pile. This can be clearly shown by looking over the last 50 years alone.

It is important for those still fighting for real change, and not distracted by this duopoly election facade, to look past all of this and remain focused on the real issue; the system, and not the individuals. As they are simply cogs in a much larger machine. Important cogs no doubt, but cogs nonetheless. Which means that taking down one, or exposing another, does help to raise awareness, yet little to truly correct the problem, as there are fifty waiting to take their place. What must be done is a long and treacherous road, one that the American people have only just begun.

As the adage goes:

A journey of a thousand miles, must begin with a single step.

Well that step has been taken, even if it is not the step many would have chosen. Yet the question remains: will we continue down the path, or be distracted…

Standing on Backs of Global Poor, Filthy Rich Getting Even Filthier

‘For every person with more than $30 million, there are over 4800 people living in extreme poverty.’ The wealth gap keeps growing as the world’s richest get richer at the expense of the poor, according to a new study released this week by an alliance of major organizations. The World Wealth Report from Oxfam, Greenpeace, and Read More…

It Is Always, Always, ALWAYS Okay To Question Official Narratives

On the fifth of April, 2017, CNN staged a fake, scripted interview featuring a seven year-old Syrian girl sounding out pro-regime change talking points syllable-by-syllable using concepts that she could not possibly understand. CNN host Alisyn Camerota was asking the child questions throughout the performance, which means that Camerota necessarily had the other half of Read More…

Facebook has purged more dissident political media pages today, this time under the pretense of protecting its users from “inauthentic activity”. In a statement co-authored by Facebook Head of Cybersecurity Nathaniel Gleicher (who also happens to be the former White House National Security Council Director of Cybersecurity Policy), the massive social media platform explained that it has removed “559 Pages and Read More…

One Reply to “The Clinton Camp Contradiction: “I Will Certainly Support The Outcome Of This Election””