Yesterday, the CDC announced that they believe an outbreak of at least 28 cases of salmonella infection in 20 US states has been linked to kratom products.

Immediately, astonishingly fast in fact, every mainstream outlet you could think of from CNN to Time picked up the story.

It went so big, you could look up “salmonella” and find nothing but articles bashing kratom. 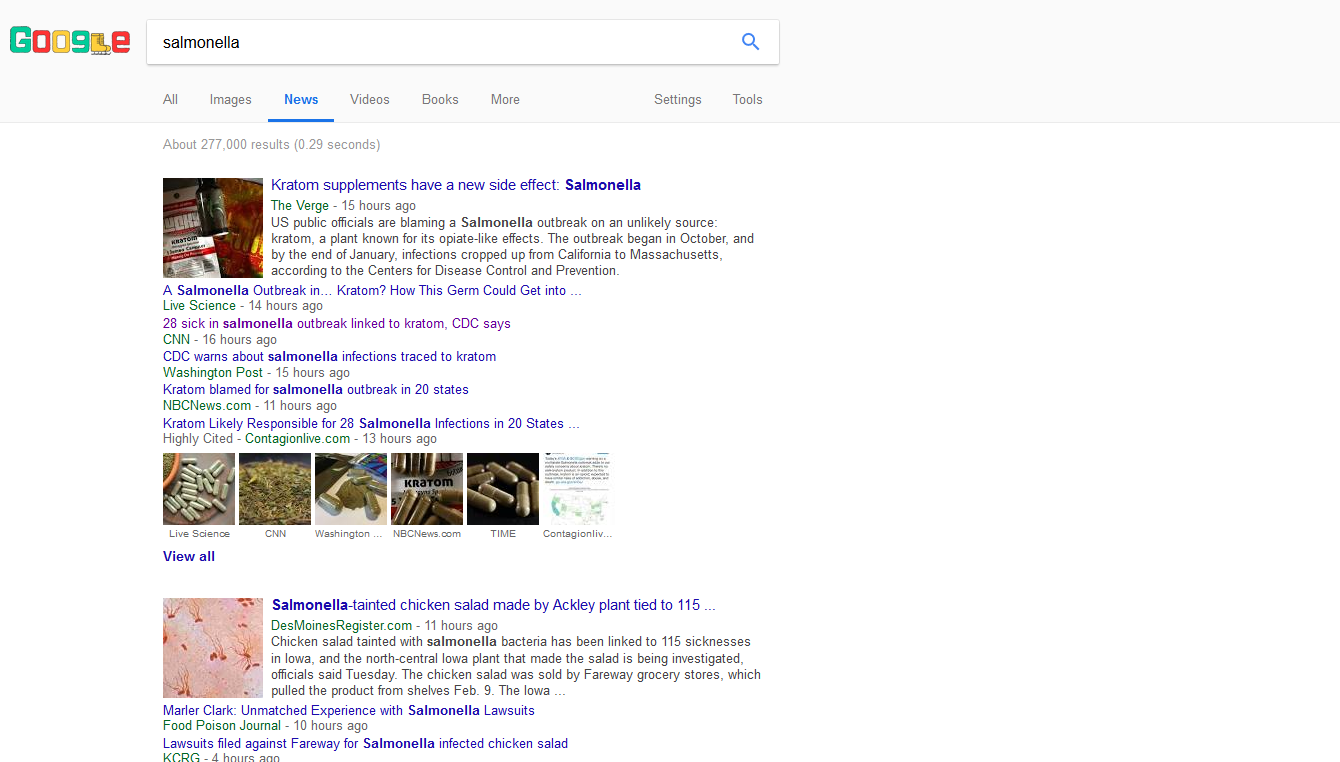 Kratom is of course a pain killing, lightly euphoria-giving leafy plant native to Southeast Asia. One cannot overdose on it, or its active alkaloids such as Mitragynine. It is very helpful for people with chronic pain.

The CDC claims that the highest number of kratom-linked salmonella cases occurred in California, which is three. Two cases were reported in each state Oregon, Ohio, North Carolina, Oklahoma, Utah and Pennsylvania while one case was reported in the states of Florida, Kentucky, Colorado, Kansas, Alabama, Arizona, Michigan, Louisiana, Massachusetts, Tennessee, South Carolina, New York, and North Dakota.

Of the 11 people who have been interviewed for the salmonella investigation, eight reported consuming kratom in pills, powder or tea. Patients first reported feeling sick October 13, but the most recently reported illness began on January 30. Due to the reporting time lag, more cases of illness may be reported, the CDC said.

No common brands or suppliers have been uncovered by the investigation, which is being conducted by the CDC along with several state health officials and the US Food and Drug Administration.

Kratom products are very loosely regulated by the FDA.

Kratom products are very loosely regulated by the FDA, CNN? Not if you can do something about it.

Is Fentanyl heavily regulated, the most dangerous opioid possibly in use today? No, of course not. It is legally sold and millions if not billions are made off the famous opioid measured in micrograms, and it is even used when it isn’t necessary at all for medical procedures, even though it is known to cause respiratory depression much more easily than traditional opiates.

Recently, the FDA declared kratom was an opioid, and every alphabet agency involved with big pharma has been out to get kratom since 2015 when the DEA decided they would take a crack at banning kratom and declare it Schedule One. They made a big mistake: the immense backlash in 2015 and the rise of kratom activists, most notably the American Kratom Association, halted the DEA’s efforts.

But the DEA and CDC both work for powers that do not give up, especially if they lose one battle. Some people really do not want kratom to be legal, and it seems like these people really want the opiate/opioid epidemic to hit America even worse.

Kratom is a true factor in helping opiate addicts and healing the deep scars of the drug war: so they can’t have it. We’ll just have to make the law not a factor.

Throughout Saturday and Sunday, Israeli warplanes have been pounding the Gaza Strip, with officials reporting strikes against 18 separate targets overnight. Two civilians were reported killed, both teenagers in Rafah hit by tank fire. The attacks started after a bombing at the Gaza-Israel border. Israeli Army officials say Palestinians rose a flag inside Gaza, but Read More…

Trump’s Continuation Of US Interventionism

Criticizing his predecessors for misguided foreign wars, President Trump promised a break in that approach, but his National Security Strategy report indicates a shift more in rhetoric than substance. President Trump’s recent report on National Security Strategy supposedly reflected his America First “realism” but his approach seems more like old wine in a new bottle, particularly his Read More…

Is The Trump Administration Reversing Support For WikiLeaks?

After months of public support for WikiLeaks, President Trump’s administration is now considering punishing WikiLeaks for the release of leaked CIA documents. “I love WikiLeaks.” That’s how presidential candidate Donald Trump described his feelings for the anti-secrecy organization at a rally in October 2016. Trump was celebrating WikiLeaks for their release of documents leaked from the Democratic National Read More…