Although the links thus far have, indeed, circumstantially indicated Soros’ involvement, the connections haven’t been entirely clear — until now.

While it’s certainly true Soros hasn’t forked over a personal check to any participants in these events — frankly, even suggesting that would be the case ignorantly ignores the larger issues at play — the association of organizations and groups his Open Society Foundations funding is not only evident, it should not be dismissed.

When Soros-backed groups are entangled in the affairs of any nation, massive upheaval tends to follow — and not necessarily for the better. Whether or not you support the growing anti-Trump movement, a bit of background concerning this fact shows the need for apprehension — this isn’t a simple matter of influencing policies to fit a liberal ideology.

Apart from involvement in Albania, Liberia, and many other nations, his tampering in the affairs of Ukraine not only remodeled its politics and economics, it ultimately fueled tensions with Russia, which recently reached a fever pitch.

“Soros is effectively the puppet-master pulling most of the strings in Kiev. Soros Foundation’s Ukraine branch, International Renaissance Foundation (IRF) has been involved in Ukraine since 1989. His IRF doled out more than $100 million to Ukrainian NGOs two years before the fall of the Soviet Union, creating the preconditions for Ukraine’s independence from Russia in 1991. Soros also admitted to financing the 2013-2014 Maidan Square protests that brought the current government into power.

“Soros’ foundations were also deeply involved in the 2004 Orange Revolution that brought the corrupt but pro-NATO Viktor Yushchenko into power with his American wife who had been in the US State Department.”

Further, Michael McFaul, “a specialist in organizing color revolutions, who later became US Ambassador to Russia,” wrote in an editorial for the Washington Post:

“Did Americans meddle in the internal affairs of Ukraine? Yes. The American agents of influence would prefer different language to describe their activities — democratic assistance, democracy promotion, civil society support, etc. — but their work, however labeled, seeks to influence political change in Ukraine.”

Ukraine, of course, has not stabilized — for one, the country has quite the neo-Nazi problem thanks to the United States and Soros — and civilians have criticized U.S. involvement.

Make no mistake, Soros’ fingerprints in a revolution or dramatic political shift aren’t a philanthropic gesture. Sure, it could be argued those sharing his particular ideologies might benefit — but the globalist inserts himself anywhere he can opportune profit and influence. What loses is any weight or autonomous will of the people of those nations — in the United States, with the case of rebellion against an elected leader, that loser is the thin vestiges of the democratic process.

With that in mind, Soros-backed groups are, indeed, shaping the anti-Trump, “Not My President” protests. Although it would be utterly irresponsible to say a large faction of demonstrators weren’t self-motivated, it would be equally capricious to imagine an organic movement would remain as organized as it has without outside, professional involvement — of which evidence abounds with a little research.

In a November 9 article in Business Insider discussing the emergence of protests around the nation, a featured photograph by the Associated Press shows students marching in the streets holding banners. One reads, “Trump = Always Racist” — but along the bottom of that banner is a curious suggestion to “Text NeverTrump to 877-877.” 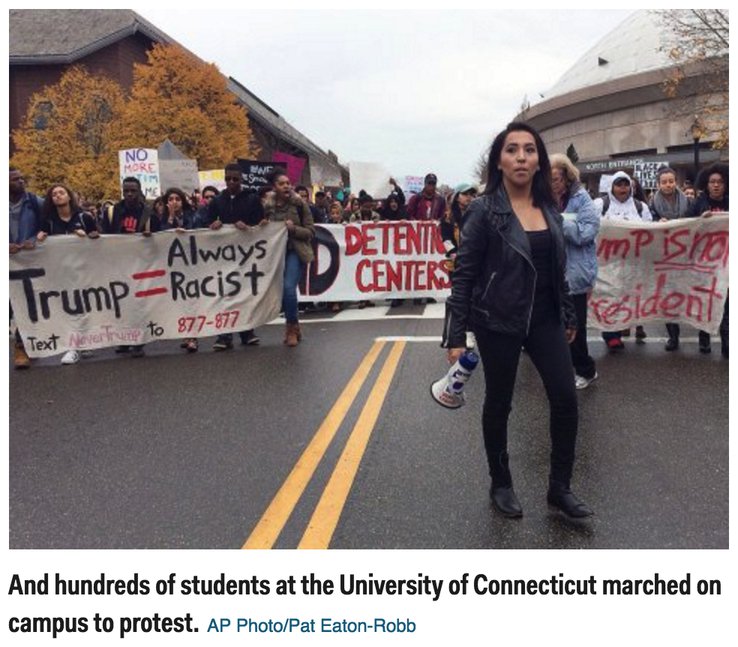 When you do just that, you will receive an automatically-generated reply text with the opening line, “Welcome to UWD – let’s stop Trump together” with the option to reply “Help” for more information. Doing so reveals UWD is “United We Dream” — an immigrant advocacy organization receiving funding from none other than George Soros’ Open Society Foundations. 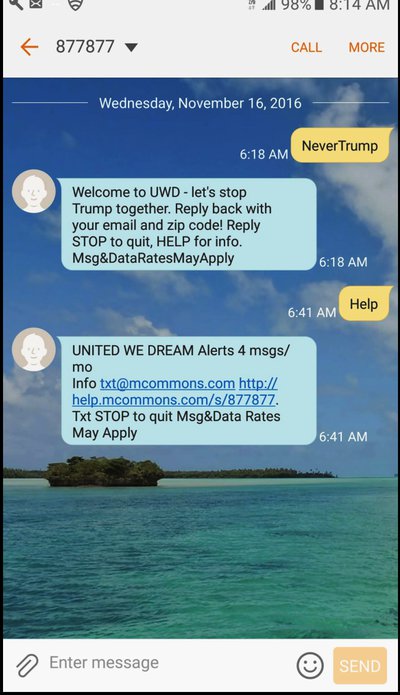 Additional associations can be found dotting CraigsList ads all around the country.

On the day after the election, one such ad in the Seattle area CraigsList job postings, titled, “Fight the Trump Agenda! We’re hiring Full-Time Organizers 15/hr!” asks for “motivated individuals” for various positions which are not detailed for the “state’s oldest and largest Grassroots Non-Profit” — “Washington CAN!” — another Open Society Foundations-funded group.

Although the phone number listed originally has changed, it can still be traced to Washington CAN, and the contact provided in the ad, Sol, is Sol Bey, listed on the organization’s now-removed staff list.

A second job listing by Washington CAN, posted on November 11, has a curiously suggestive heading: “Organize to stop Trump Agenda! Be Civil, but Don’t Back Down. $15/hr!” 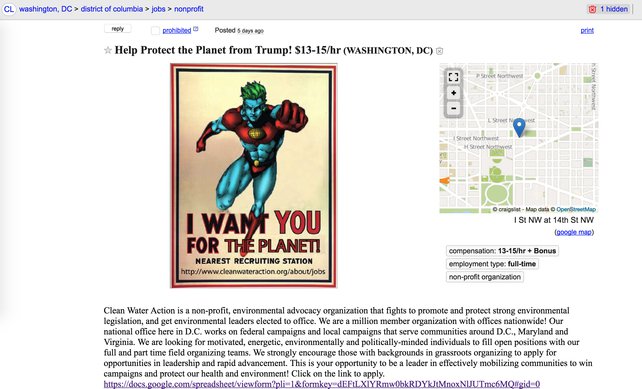 Below are multiple other ads in large cities from across the United States in which anti-Trump protesters are being sought out. 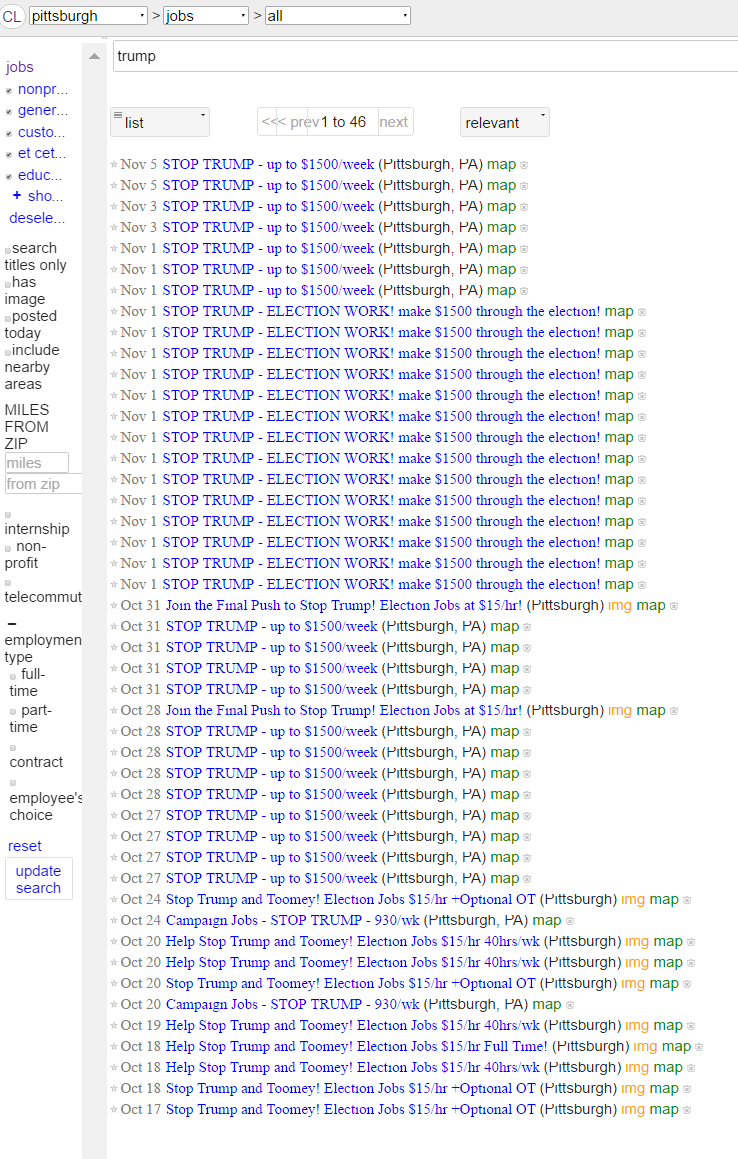 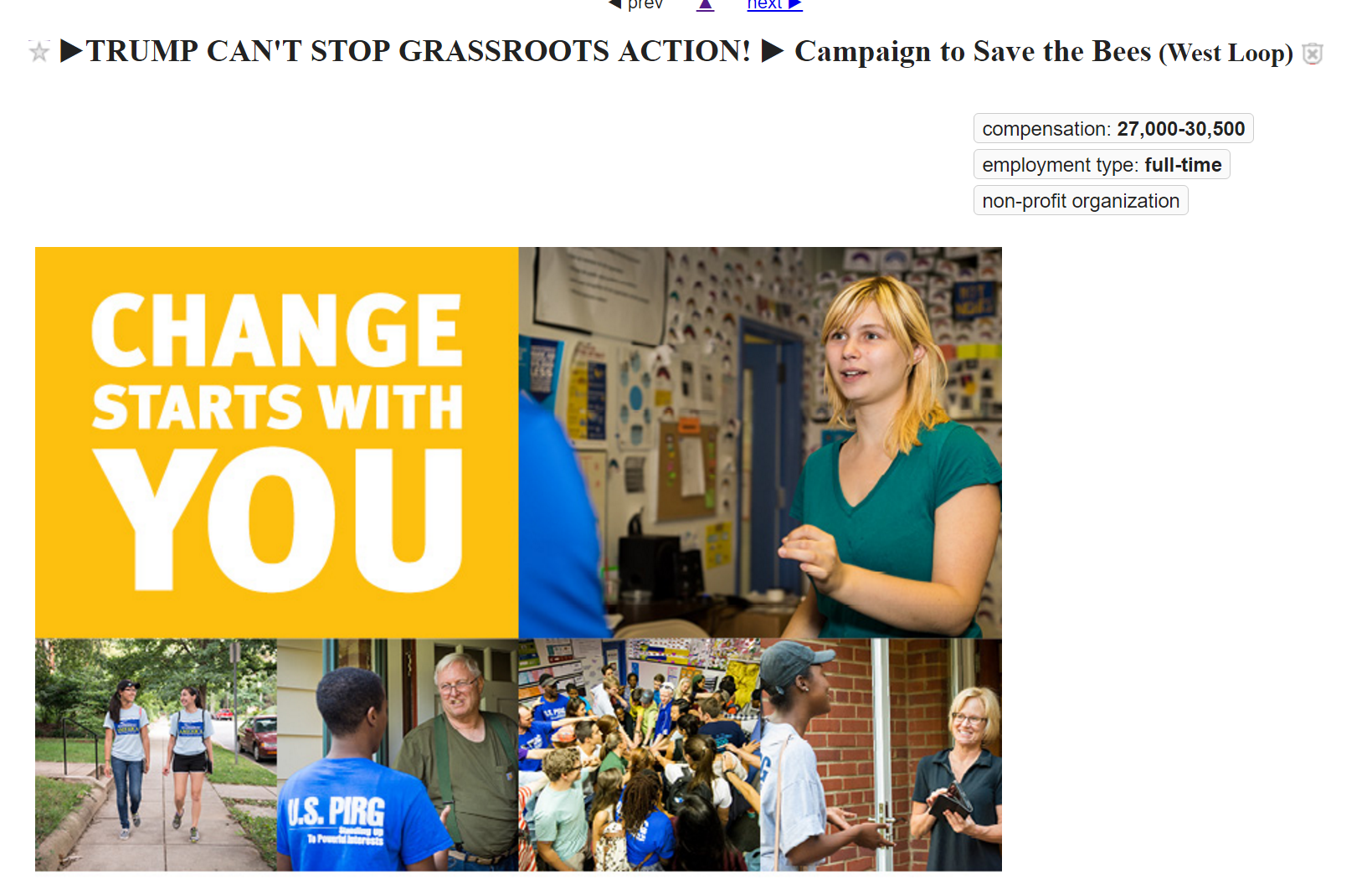 Seattle, WA – On the NFL’s opening weekend the Seattle Seahawks are planning to become the first team to join Colin Kaepernick’s silent protest during the national anthem. Seattle wide receiver Doug Baldwin took to social media yesterday to confirm speculation that the team will be engaging in some type of unified display during the Read More…