On June 19, 2020, 269 gigabytes of internal U.S. police documents were released by the group Distributed Denial of Secrets as part of the #BlueLeaks operation. The documents were reportedly obtained by “a source aligned with the hacktivist group Anonymous” after a security breach of Netsential. #BlueLeaks has been called the largest hack of U.S. police documents. The collection contains emails, audio files, intelligence files, bulletins, and memos, mostly drawn from law enforcement Fusion Centers, produced between August 1996 and June 2020.

Fusion Centers are centralized systems that pool and analyze intelligence from federal, state, local, and private sector entities. The National Network of Fusion Centers was created after the 9/11 attacks to provide for more streamlined communication between federal and local agencies. The Fusion Centers have been criticized as violations of civil liberties and a danger to separation of federal and local governments, and the abuses of these centers predate #BlueLeaks, including targeting of protesters of the Dakota Access Pipeline. Most infamously, in 2009 it was revealed that the Missouri Information Analysis Center (MIAC) was targeting supporters of third party candidates, Ron Paul supporters, anti-abortion activists, and “conspiracy theorists” as potential domestic extremists.

Some reports on #BlueLeaks have shown police using counter-surveillance methods on Black Lives Matter protesters and concerns of face masks blocking facial recognition. However, due to the size of the #BlueLeaks files, important information is still being found and reported on.

In fact, I was recently notified that my name and a video I produced were listed in the files. I was informed that a friend and fellow activist was listed in a document from the Austin Regional Intelligence Center, a Fusion Center based in Central Texas. The ARIC is a partnership between 19 local law enforcement agencies and shares data with the FBI and Department of Homeland Security. 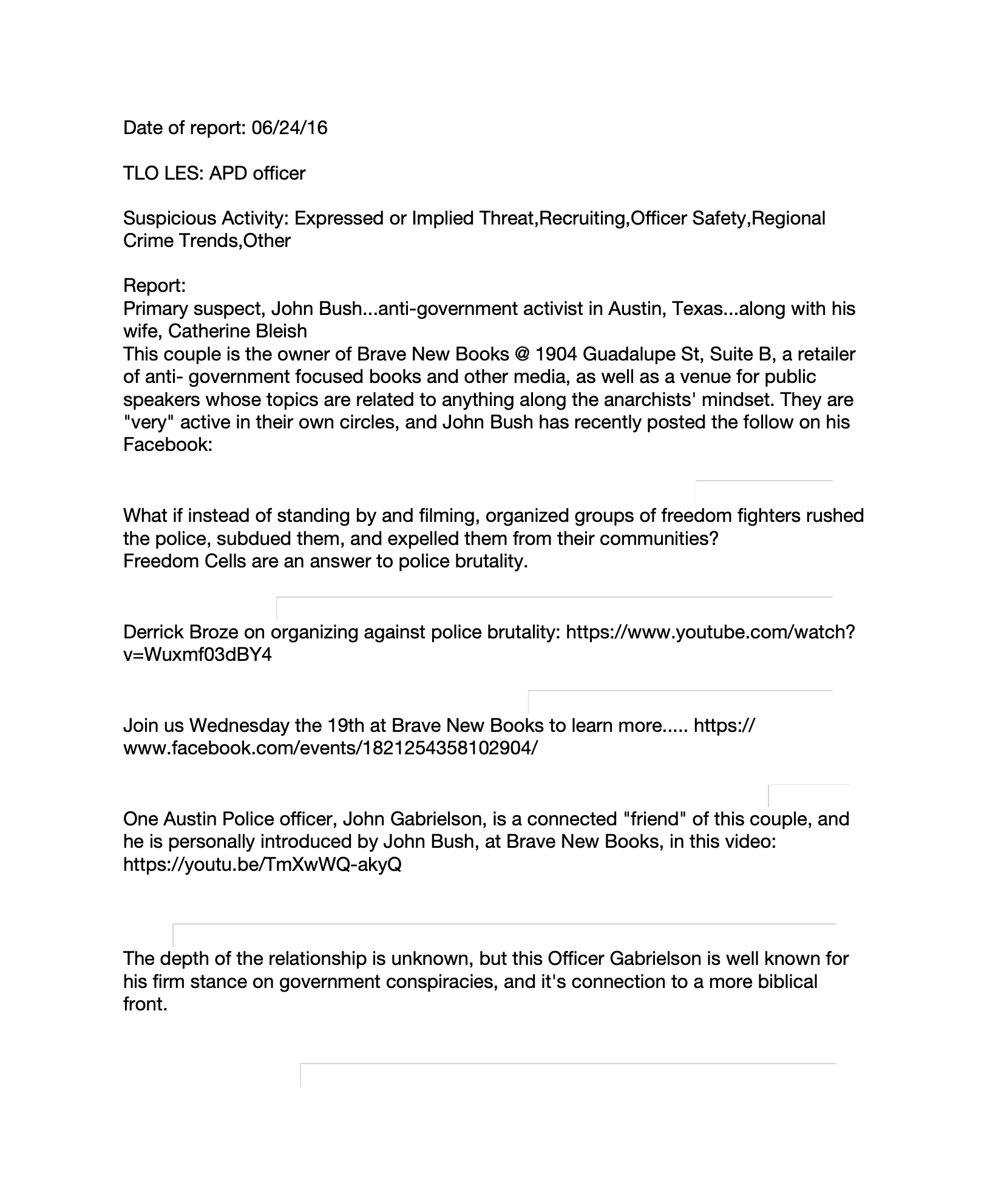 The documents from the ARIC contain a 2016 report of a “Threat Liaison Officer” who was investigating activist John Bush. The report identifies Bush as an “anti-government activist” who was manager of Brave New Books, “a retailer of anti- government focused books and other media, as well as a venue for public speakers whose topics are related to anything along the anarchists’ mindset.”

The TLO also notes that Bush had recently posted the following statement on Facebook:

What if instead of standing by and filming, organized groups of freedom fighters rushed the police, subdued them, and expelled them from their communities? Freedom Cells are an answer to police brutality.

Bush’s statement was in relation to an event being held at Brave New Books in 2016. The event, Freedom Cells: An Introduction and Call to Organize, was focused on the organizing concept called Freedom Cells. Essentially, Freedom Cells are a decentralized way for activists to organize their communities and create more independence from government and other centralized institutions. John Bush was the originator of the concept and the person who introduced me to the idea. I was invited to speak as part of the event to share my thoughts. The TLO report specifically mentions my name and then links to a video I produced called “How To Organize Against Violent Cops.”

Unfortunately, this is not the first time I was alerted to law enforcement maintaining a watchful eye on my activities or those of my associates. In 2012, I was notified that the Houston Police Department was keeping tabs on myself and other activists in Houston. An anonymous source within HPD sent me pictures of training sessions where the activist group I started, The Houston Free Thinkers, and my name were specifically mentioned.

A recent report from The Austin Chronicle provided more detail on how the so-called Threat Liaison Officers operate. Essentially, it appears the federal government has used Fusion Centers to create a national “Suspicious Activity” network. Documents obtained by the Chronicle reveal that TLO’s must sign nondisclosure agreements with the ARIC, preventing them from talking about their activities. These NDA agreements have even been given to private citizens turned informants who have been ordained “For Official Use Only Threat Liaison Officers.”

“The FOUO TLO program appears to create a cadre of anonymous, non-law-enforcement citizen informants who, unlike ARIC, are completely unaccountable to the public,” Peter Steffensen, a lawyer with the Texas Civil Rights Project and ARIC Community Advocate, told the Chronicle. “Given this country’s tortured history of over-surveillance of Black and brown communities, these secretive programs deserve intense scrutiny and more substantial public oversight.”

The federal government is, in effect, building a secret police made up of private citizens who gather data on their peers and then are signed into secrecy with NDAs. The Austin Chronicle further detailed the nature of the TLO documents:

“The leaked documents include submission forms TLOs use to make their reports. At the top of the forms are boxes to check indicating the type of activity being reported. These include the aforementioned “School Threat,” but also “Eliciting Infor­ma­tion,” “Observation/Surveillance,” and “Suspicious/Odd Facebook Post.” The TLO report spreadsheet contains 128 reports of school threats. But the category most reported by far was “Expressed or Implied Threat,” with more than a thousand entries.”

The activity of the Austin Regional Intelligence Center should come as no surprise to anyone who has followed the controversy over Fusion Centers since their creation in the aftermath of the 9/11 attacks. However, through the #BlueLeaks documents we now have a clearer understanding of how they operate.

“Police agencies commonly contact the Maine center with requests for help identifying a person depicted in a photo, sometimes captured from a surveillance camera. Other pictures are taken directly by law enforcement, or appear to be pulled from Facebook or other social media sites.”

The Herald also notes that in one incident Maine police asked the Fusion Center to identify a passenger in a car who refused to identify himself, allow the police to take his fingerprints or take a photo of him.

Coincidentally, the #BlueLeaks revelations on Fusion Centers align with another set of recently released documents which TLAV reported on earlier this month. In a set of emails obtained by the Electronic Privacy Information Center, an executive director of the National Fusion Center Association, a lobby group for fusion centers proposed an “automate[d] contact tracing and notification” system to the White House. This would mean that the Trump administration would receive automatic updates on the contact tracing efforts, and potentially, the data gathered by tracking apps.

Despite most of America being ignorant to what Fusion Centers are and how they operate they are continuing to impose on our lives. The abuse of these data centers is simply yet another outgrowth of the War on Terror that followed the attacks of September 11, 2001.

Welcome to The Daily Wrap Up, a concise show dedicated to bringing you the most relevant independent news, as we see it, from the last 24 hours (12/16/21). As always, take the information discussed in the video below and research it for yourself, and come to your own conclusions. Anyone telling you what the truth Read More…

Costa Rica Has Been Thriving On 100% Renewable Energy For 113 Days (And Counting!)