Luke Rosiak of the Daily Caller is out with a follow-up to a report on the Awan Pakistani IT family who had access to highly sensitive Congressional networks, both on-site and from Pakistan, where they are suspected of a variety of crimes -including brokering classified information to hostile foreign governments. Of note, they had access to the House Permanent Select Committee on Intelligence – whose members have top secret clearance and are looking into Russian election interference.

Note Rep. Louie Gohmert’s reaction when he learns of the Awan’s remote access from Rosiak:

The Awans also operated a used car dealership known as “CIA” in court filings, which has all the markings of a money laundering operation:

On its Facebook page, CIA’s “staff” were fake personalities such as “James Falls O’Brien,” whose photo was taken from a hairstyle model catalog, and “Jade Julia,” whose image came from a web page called “Beautiful Girls Wallpaper.”

If a customer showed up looking to buy a car from Cars International A, often referred to as CIA, Abid Awan — who was managing partner of the dealership while also earning $160,000 handling IT for House Democrats — would frequently simply go across the street to longstanding dealership called AAA Motors and get one.

While Imran and Abid Awan ran their car dealership in Falls Church, Va. in the early part of the decade, Drug Enforcement Agency officials a few miles away in Chantilly were learning that the Iranian-linked terrorist group frequently deployed used car dealerships in the US to launder money and fund terrorism, according to an explosive new Politico expose. –Daily Caller

“Based on the modest way Awan was living, it is my opinion that he was sending most of his money to a group or criminal organization that could very well be connected with the Pakistani government,” said Wayne Black – a private investigator who worked in Janet Reno’s Miami public corruption unit, adding “My instincts tell me Awan was probably operating a foreign intelligence gathering operation on US soil.”

In February, the Daily Caller dropped two bombshells: that the Awans were under criminal investigation after being caught accessing congressional computers without permission, and they had borrowed, laundered, and never repaid $100,000 from a shady Iraqi expat physician – Dr. Ali al-Attar, a Hezbollah-linked fugitive who led a group of other expats which regularly advised the Bush administration on their plans to invade Iraq in 2002-2003 (source).

Philip Giraldi, a former CIA officer, wrote that Attar “was observed in Beirut, Lebanon conversing with a Hezbollah official” in 2012–shortly after the loan was made. –DC

Al-Attar’s license to practice medicine was revoked by the Maryland State Board of Physicians and he had to pay a $50,000 fine for unprofessional conduct, healthcare fraud, and failure to cooperate with an investigation. 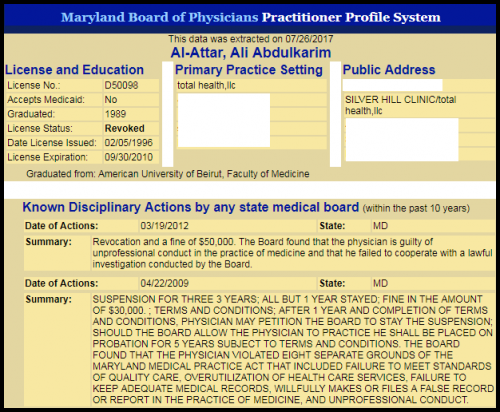 The money which the Awans borrowed was moved from Ali Al-Attar through accounts intended for Fairfax County real estate. Both Imran Awan and Khattak — who also put up $200,000 in cash as an investor in CIA — had realtors licenses.

Per the Daily Caller:

It’s not clear where the dealership’s money was going, because it was sued by at least five different people on all ends of a typical car business who said they were stiffed. CIA didn’t pay the security deposit, rent or taxes for its building, it didn’t pay wholesalers who provided cars, and it sold broken cars to people and then refused to honor the warranties, the lawsuits say.

Adding to the list of interesting connections, when the Awans stopped paying vendors of their ‘CIA’ dealership, a U.S. Congressman from Florida began paying a monthly salary to a man who had threatened to sue the Awans.

The brothers had numerous additional sources of income, all of which seemed to disappear. While they were supposedly working for the House, the brothers were running a car dealership full-time that didn’t pay its vendors, and after one — Rao Abbas — threatened to sue them, he began receiving a paycheck from Rep. Theodore Deutch (D-FL), who like Wasserman Schultz represents Florida. –Daily Caller

The Awans were also accused of stealing “huge amounts” of computer equipment from the House. As the Daily Caller reports:

Shortly before the 2016 election, investigators found huge amounts of House equipment unaccounted for under the Awans’ stewardship, and when they looked into the family further, they found that they had logged in to members’ computers for whom they did not work. There were signs that the House Democratic Caucus’ server “is being used for nefarious purposes and elevated the risk that individuals could be reading and/or removing information,” according to a House investigation. They were also moving files online, “a classic method for insiders to exfiltrate data from an organization,” the report found, and “steps are being taken to conceal their activity.”

In July, Imran Awan was arrested by the FBI at Dulles Airpirt attempting to leave the country, and was indicted by a grand jury on four counts along with his wife Hina Alvi, on allegations that the pair made false statements on loan applications before wiring nearly $300,000 to Pakistan. ““Defendants AWAN and ALVI did unlawfully, willfully, and knowingly conspire, combine, confederate, and agree with each other to commit offenses against the United States,” including bank fraud, false statements, and unlawful monetary transactions, the indictment said.”

Awan’s arrest came days after a Daily Caller report that the FBI has seized more equipment from the garage of a house owned by Imran Awan and his wife Alvi after a tenant called investigators.

Fellow IT staffers interviewed by TheDCNF said the Awans were often absent from weekly meetings and email exchanges. One of the fellow staffers said some of the computers the Awans managed were being used to transfer data to an off-site server.

Shortly after the criminal probe was revealed in February, Imran abruptly moved out of his longtime home on Hawkshead Drive in Lorton, Va., and listed it for rent on a website that connects landlords with military families.

The new tenants were none other than a retired Marine and his active duty Navy wife. In the garage, they found “wireless routers, hard drives that look like they tried to destroy, laptops, [and] a lot of brand new expensive toner.”

After hearing about the House investigation into the Awans on the radio, the tenants called the Navy Criminal Investigative Service (NCIS), and shortly thereafter the FBI and Capitol Police became involved.

Speaking on the condition of anonymity over concerns for his wife’s naval career, the former Marine told the Daily Caller:

“It was in the garage. They recycled cabinets and lined them along the walls. They left in a huge hurry,” the Marine said. “It looks like government-issued equipment. We turned that stuff over.”

THREE DAYS before U.S. Capitol Police told House members about the Awans, their stempmother called Fairfax County, Virginia police report she was imprisoned in their house – kept from her husband’s deathbed. Oh, and they were bugging her with listening devices.

A relative described the woman’s life as being completely controlled by the brothers for months while they schemed to take their father’s life insurance. –Daily Caller

After their father died, the Awans carted their stepmother to Pakistan to collect her inheritance – which they promptly extorted from her.

So – the Awans, who were in a trusted position – handling some our nation’s most sensitive information, ran a shady car dealership, remotely accessed House networks from Pakistan, imprisoned their stepmother and stole her inheritance, took $100K from a Hezbollah-linked doctor, let Rep. Theo Deutch pay their bills, stole and smashed computer equipment, and helped Debbie Wasserman Schultz make a call using a voice changer to a law firm suing the DNC.

The only thing I can conclude from this is that Debbie Wasserman-Schultz had Hezbollah spies working for her.

Is Wasserman-Schultz a foreign agent? https://t.co/0NawkbCLd8

The War Against The People: Fear And Loathing In NY And DC

Thank you for your support. Merry Christmas and Happy New Year. Vladimir Putin is the secret president of the United States. Yep. That’s it. The US is now the USSR. It’s all over. Trump is a Communist who took orders from Putin. Trump is a Red. That was his game all along. He’s a billionaire Read More…

The Questions That Need To Be Asked After London

In this video, we cover the breaking news of the latest events in London with a heavy skepticism of government and media. We raise some important questions about how the media portrayed today’s events and if you agree please share this video and overall message.

CDC Executive Resigns After Being Caught Scheming With Coca-Cola

We have two choices when it comes to food. We can either feed disease or we can fight it. Unfortunately, many of us are electing for the former, and our eating habits, ingrained from childhood, aren’t helping. Sugar continues to be named among the worst disease-promoting culprits, and yet from a young age, we crave (and are Read More…