In the harshest warning yet that China is actively contemplating a worst case scenario for its diplomatic relations with the US, a senior Chinese military official said that “a war within the president’s term’ or ‘war breaking out tonight’ are not just slogans, they are becoming a practical reality.” The remarks, first reported by the SCMP, were published on the People’s Liberation Army website in response to the escalating rhetoric towards China from America’s new administration, and as Beijing braces itself for a possible deterioration in Sino-US ties, with a particular emphasis on maritime security.

The commentary written by an official at the national defense mobilization department in the Central Military Commission – which has overall authority of China’s armed forces – also called for a US rebalancing of its strategy in Asia, military deployments in the East and South China Seas and the instillation of a missile defense system in South Korea were hot spots getting closer to ignition. 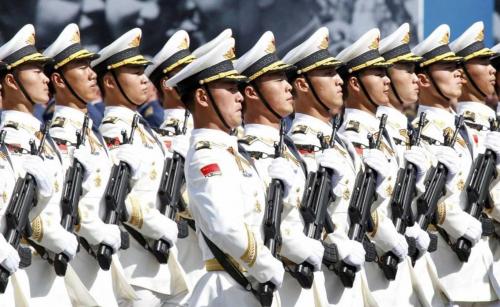 The People’s Liberation Army, quoted by SCMP, said in a commentary on its official website last Friday, the day of Trump’s inauguration, that the chances of war have become “more real” amid a more complex security situation in Asia Pacific. 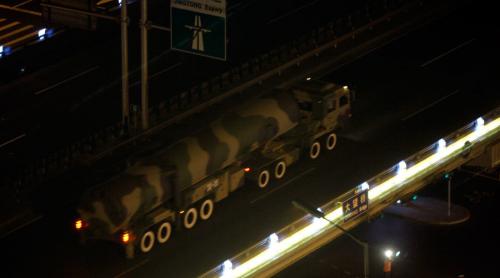 Provocative state-run tabloid The Global Times suggested the People’s Liberation Army could have leaked the photos on social media as a warning to Mr Trump. However, Chinese President Xi Jinping has also recently called for the reduction of nuclear weapons.

The most recent deterioration in US-Sino diplomacy follow a statement by Trump spokesman Sean Spicer who told a press conference on Monday that the US would prevent China from taking over territory in international waters in the South China Sea. Spicer told the press “the US is going to make sure that we protect our interests there,” when asked about US President Donald Trump’s position on the South China Sea. “It’s a question of if those islands are in fact in international waters and not part of China proper, then yeah, we’re going to make sure that we defend international territories from being taken over by one country,” he said.

Foreign ministry spokeswoman Hua Chunying responded by telling the US “to be cautious in what it says and does, so as to avoid harming the peace and stability in the region.”

The Chinese military is constantly prepared for possible military conflict whoever serves as US president, but Donald Trump’s possible “extreme approach” against China was dangerous, according to analysts.

Ian Storey, a senior fellow at ISEAS-Yusof Ishak Institute in Singapore, said some of the comments from Trump’s key advisors and appointees suggest that the US may pursue a more hardline policy against Beijing in the South China Sea over the next four years.

“As it’s highly unlikely that China will compromise its sovereignty claims in the face of US pressure, we can be sure that the dispute will increasingly become a risky point of contention between Beijing and Washington,” he said.

The comments come as President Xi Jinping is overseeing massive reforms within China’s military to improve its fighting capabilities. A huge reshuffle is also underway in the military’s top brass. Vice-Admiral Shen Jinlong, commander of the South Sea Fleet, is to replace retiring Admiral Wu Shengli as chief of the PLA Navy.

Israel’s Coming War Won’t Be Against Iran Or Syria

Writing in the Asia Times earlier this month, David P. Goldman lamented that an Israel-Iran war is unlikely to take place any time soon. His observation appears surprising considering the mainstream media has been hyping up the idea of such a war over the past few months. Nevertheless, he is correct. Short of something catastrophic that completely upsets the current Read More…

Andrew McCabe lied four times to the Department of Justice and the FBI – including two times while under oath with Inspector General Michael Horowitz, according to Rep. Jim Jordan (R-OH) appearing on Fox News.  This is the first time the public has heard more detail of the circumstances behind the decision to fire McCabe just over one day before he qualified for Read More…