While most Congressional observers are focused on the battle to avert a weekend government shutdown (an outcome that’s looking increasingly likely), the Senate on Thursday quietly passed an extension of the NSA’s spying surveillance program, sending the bill to the president’s desk a week after the House voted to authorize the controversial plan.

Even President Trump voiced skepticism about reauthorizing the bill in a tweet earlier this year, where he claimed it had helped the Obama administration spy on the Trump campaign, although he infamously flip-flopped later.

As the Hill pointed out, the vote comes after an (almost) tension-filled hour on the Senate floor earlier this week where opponents tried, but failed, to mount a filibuster to force additional debate on the legislation, with both sides spotted lobbying key holdouts. Opponents rallied against the bill ahead of Thursday’s vote, arguing the legislation is being rushed through.

He added that senators should “consider the gravity of the issues at hand and to oppose reauthorization until we can have a real opportunity for debate and reform.”

Critics of the controversial Section 702 of the FISA Act – the measure that was reauthorized by the Senate today and is expected to be signed into law despite Trump’s reservations – said it allows the FBI to spy on Americans without first obtaining a warrant. Though some surveillance experts have disputed this.

As the Wall Street Journal explained, Section 702 underpins a wide range of electronic collection against foreign targets overseas and has been referred to by officials as critical to national security. The law was set to expire Friday unless Congress voted to reauthorize it.

Opponents of the bill say the secrecy surrounding intelligence agency operations has made it prone to abuse. One of the most prominent critics of reauthorization is Thomas Drake, an NSA whistleblower who raised concerns about the domestic spying initiatives that were revealed by Edward Snowden – except he raised his concerns through official channels.

The vote passed in a 65 to 34 vote with bipartisan support, meaning quite a few members of the Democrats “resistance” ended up aligning with the hated Donald Trump.

US Senate votes 65 to 34 to reauthorize Section 702 FISA surveillance program through 2023; bill now goes to Trump to sign (colinlecher / The Verge)https://t.co/aEbzIVgTm2https://t.co/izFsf7ejCw

Supporters only needed 51 votes on Thursday, giving them more breathing room, compared with the 60 votes needed on Tuesday’s procedural hurdle.

Per the Wall Street Journal, Majority Leader Mitch McConnell exhorted his colleagues to back extending the program ahead of Thursday’s vote, calling it “one of the most important tools” for national security officials. By passing the bill, Congress rejected efforts by a coalition of conservative Republicans, civil libertarians and liberal Democrats to enact new privacy protections for Americans who are inadvertently caught up in surveillance by American intelligence agencies.

Read the final roll-call below: 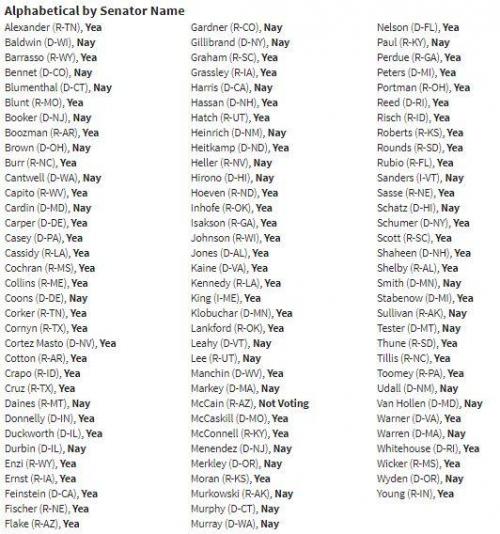 In response to criticisms made by Congresswoman Ilhan Omar that US political leaders have too much allegiance to Israel and its lobbying groups, House Democrats have put forward an entire House resolution in accordance with demands made by AIPAC and the Anti-Defamation League. “The backlash [over Omar’s comments] continued on Monday, as the Anti-Defamation League Read More…

Washington, D.C. — On April 19, The House Appropriations Committee approved its budget — at $21.3 billion in funding — for the fiscal year 2017. And in a report that accompanied the spending bill, the committee asked the FDA to extend Freedom of Information Act (FOIA) exemption to certain “checkoff programs” that promote commodities in the agriculture Read More…

A longtime opponent of genetically engineered mosquitoes was found dead in a Washington D.C. hotel as she prepared to present a petition with over 200,000 signatures to the EPA. On Tuesday morning Mila de Mier—a 45-year-old activist from Key West, Florida who opposed the release of genetically engineered mosquitoes—was found dead in a swimming pool Read More…