In the past five years, the New York Police Department has spent $347,000 on false arrest lawsuit settlements. According to the Village Voice, these costs stem from the city’s “gravity knife statute.”

Passed in 1958, the law banned New York residents from carrying knives fitted with blades that fall out of the handle as the user points them toward the ground while pushing the lever. This antiquated law is responsible for thousands of yearly arrests, despite the fact that current knife designs bear no resemblance to the blades of yesteryear.

But estimates suggest that over the past ten years, this particular ban has been the reason for the prosecution of “60,000 New Yorkers … many of them working people who use folding knives as part of their jobs.” A recent incident shows another unintended consequence of upholding the gravity knife statute — one that cost a South Bronx resident $18,000.

In a very public tweet, the NYPD announced Sunday that officers from Police Service Area 7 had “arrested a male for a gravity knife and vouchered $18,000 dollars cash for forfeiture.” The triumphant tweet, The Village Voice pointed out, even “[publicized the prisoner’s] name and address, down to the apartment number.” 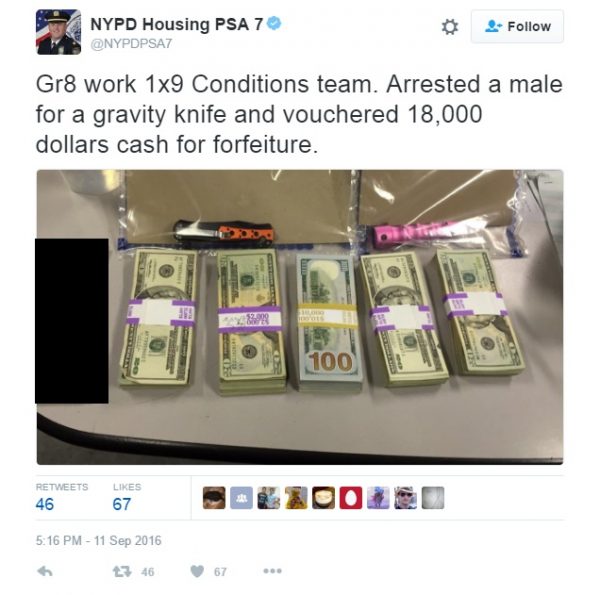 By coupling an outdated law with civil asset forfeiture rules — which in New York state, happen to be draconian — officers managed to take advantage of yet another property owner in order to “prop up” the local police budget.

While few details about the arrest were made public, the Village Voice added, many on Twitter commented that the model of knife the arrestee was carrying “appear[ed] to be a style often carried by first responders, with a feature designed for safely cutting clothes and tangled seat belts after, say, a car accident.” The news outlet reached out to the NYPD for more information, but officers failed to respond with more details.

The gravity knife ban was tweaked in June when Democrats added an amendment to the state law clarifying “the definition of a gravity knife by excluding any folding knife with a ‘bias toward closure.’” The change has yet to be signed by Governor Andrew Cuomo.

But even if it’s signed, this change to the state law does little to protect the New Yorkers’ constitutional right to own and carry any means of self-defense. Nevertheless, it could help to limit the number of individuals framed by the NYPD over folding knives and pocket knives, which are often “used for work or passed down in a family.”

Even if the tweak to the state’s knife ban is finally signed into law, this measure, alone, will not be enough because the state’s civil asset forfeiture laws remain intact. Until serious criminal justice reforms are passed in the Empire State, New Yorkers will continue to be bullied in the name of policing for profit.

Instead of Arresting Him, Officer Drove Man 100 Miles For His Sister’s Funeral

From street-level police interaction to the court room, it is hard to deny this nation’s clear issue with its justice system as a whole. Race aside, any country that has over 1000 people shot and killed in a given year, clearly has a problem that needs to be addressed. Now whether that issue rests with the officers themselves or Read More…

We’ve Spent $1 Trillion on US Police State Since 9/11… If they ‘Hated Our Freedom,’ They Must Love Us Now

Never let a tragedy go unused. This mantra of the State is as strong today as it was the day after 9/11. As 9/11 was used to invade and occupy Iraq and Afghanistan – securing a geopolitical foothold in the region like never before – civil rights were dismantled and energies were devoted to the Read More…

Welcome to The Daily Wrap Up, a concise show dedicated to bringing you the most relevant independent news, as we see it, from the last 24 hours (5/6/19). As always, take the information discussed in the video below and research it for yourself, and come to your own conclusions. Anyone telling you what the truth Read More…