During last night’s “Commander in Chief” forum, both presidential candidates laid out their views about the future of the U.S. military, as well as the country’s defense and security. Although both candidates committed numerous gaffes, none appears to have gotten as much criticism as event moderator Matt Lauer. As the NYT reports this morning:

“charged with overseeing a live prime-time forum with Donald J. Trump and Hillary Clinton, as a dry run of sorts for the coming presidential debates, Lauer found himself besieged on Wednesday evening by critics of all political stripes, who accused the anchor of unfairness, sloppiness and even sexism in his handling of the event.”

The reason for the anger, originating mostly on the left, is that having been granted 30 minutes with each candidate, Lauer devoted about a third of his time with Mrs. Clinton to questions about her use of a private email server, then seemed to rush through subsequent queries about weighty topics like domestic terror attacks.

The highlight of the event, and what set the stage from the beginning, was a question from Navy veteran Lt. John Lester who set the adversarial mood with a question about Hilllary reckless handling of classified material.

“As a Naval flight officer I held the top secret sensitive compartmentalized information clearance. And that provided me access with materials and information highly sensitive to our war fighting capabilities. Had I communicated this information not following the prescribed protocols I would have been prosecuted and imprisoned. Secretary Clinton, how can you expect those such as myself who are and were trusted with America’s most sensitive information to have any confidence in your leadership as president when you clearly corrupted our national security.”

Hillary used her fallback excuse that the documents were not marked as classified, one which she had reverted to previously when she explained she didn’t know what the “c” designation means. As reported yesterday, Julian Assange announced that Wikileaks has thousands of cables Hillary Clinton signed with a “c” that designated it as classified confidential, and suggested he would disclose proof that Hillary has lied.

Lauer was also lambasted when an Army veteran in the audience asked Mrs. Clinton to describe her plan to defeat the Islamic State, Mr. Lauer interjected before the candidate could begin her reply. “As briefly as you can,” he said, one of several moments where the anchor spoke over Mrs. Clinton to remind her that their time was running short.

The NBC host was then slammed for not asking follow-up questions and letting Trump flip from previous statements he’s made. Reporters especially took issue with Lauer not pushing back on Trump’s claim that he has opposed the Iraq War from the start.

AND LAUER SAID NOTHING

So @MLauer’s plan is just to let Trump lie about his past statements on Iraq?

I assume you all are joking about a journalist letting Trump repeat his most famous lie without challenging it.

Two shameful moments when @MLauer let Trump get away with blatant falsehoods https://t.co/4X0B46XPhy

Clearly he demonstrated himself unfit and too uneducated for the job. Yes, Matt Lauer @MLauer should never moderate an election forum again.

As the NYT adds, journalists and longtime political observers pounced. “How in the hell does Lauer not factcheck Trump lying about Iraq? This is embarrassingly bad,” wrote Tommy Vietor, a former aide to President Obama. Glenn Kessler, the chief fact checker at Washington Post, posted a link to NBC’s check of Mr. Trump’s claim and wrote: “@MLauer should have been prepared to do this.”

“‘Lauer interrupted Clinton’s answers repeatedly to move on. Not once for Trump,’ Norman Ornstein, the political commentator, wrote in a Twitter message, adding: ‘Tough to be a woman running for president.’

“Trump has maintained throughout his campaign that he never supported the Iraq War, although early interviews prove otherwise. Clinton, who went first during the NBC News event, charged that she and Trump both made a mistake in supporting the war in its beginnings. On social media, surrogates for Mrs. Clinton began mounting a sustained attack on the anchor. ‘Imagine if @NBCNews had done its job,’ wrote Nick Merrill, her press secretary, on Twitter. Neera Tanden, a close Clinton ally, was even harsher: ‘I guess the good news is that Matt Lauer isn’t moderating an actual debate,’ she wrote.

“The criticism captured what has become a common complaint about media coverage during this election: that news organizations and interviewers treat Mrs. Clinton as a serious candidate worthy of tough questions, while Mr. Trump is sometimes handled more benignly.

“Mr. Lauer did manage to extract several head-turning statements from Mr. Trump. He confronted Mr. Trump with a crass Twitter message from 2013 in which the future candidate suggested that sexual assaults in the military were a logical result of men and women serving together. “It is a correct tweet,” Mr. Trump said.]

“When Mr. Lauer asked if Mr. Trump actually believed he knew more about the Islamic State than American generals, the candidate replied: ‘The generals have been reduced to rubble.’ When Mr. Lauer brought up Mr. Trump’s admiration for President Vladimir V. Putin of Russia, noting that Mr. Putin had invaded Ukraine and was suspected of hacking Democratic emails, Mr. Trump refused to say a negative word about him. ‘Do you want me to start naming some of the things that President Obama does?’ Mr. Trump asked.”

With the formal debates set to begin on Sept. 26, Lauer’s performance seemed to preview the troubles that television moderators could face in balancing fairness with accountability. Trump, with his Houdini-like ability to squirm out of direct answers, is a particularly tough subject for interviewers, who will be forced to determine on the fly when to interrupt with a prime-time fact-check. Chris Wallace, the Fox News anchor who will handle the third presidential debate, drew criticism this week when he said, “I don’t view my role as truth-squading.” Questions for Hillary, meanwhile, will be seen as politically charged if they touch on topics many outside the mainstream find as important, such as her health or her conduct relating to the FBI probe and/or her receipt of numerous funds from foreign sources such as Saudi Arabia.

However, the biggest reason why Lauer’s conduct was furiously slammed by the mainstream may be the outcome of the first quasi-debate, best captured by NBC itself. 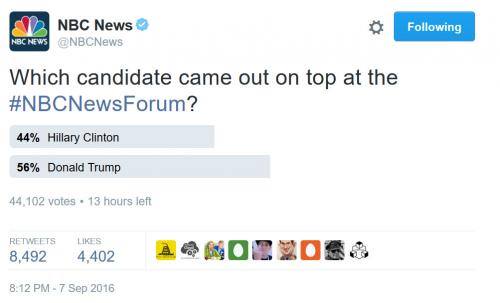 *Update: The number has now risen from the initial report of 43 to a total of at least 50 killed in the attack. Saudi-led coalition airstrikes today killed dozens of people, including children traveling on a bus, in Yemen’s Saada province, Yemeni medical sources and the International Committee of the Red Cross (ICRC) said. The Read More…

Flat Earth Theory – An Exercise in Keeping an Open Mind

In this day and age of misdirection, manipulation and misinformation, a Truther must be careful not to easily fall victim to what’s referred to as a “Limited Hang out” or psyop, or an intentional psychological operation designed to lead the believer in a direction that discredits the other beliefs the Truther may hold, that may in Read More…

When TransCanada announced at the start of the year that it that it was demanding compensation under North American Free Trade Agreement (NAFTA) rules for the Obama administration’s decision to reject the Keystone XL pipeline, many observers saw it as a sign of things to come. Indeed, critics of two pending trade deals—the Trans-Pacific Partnership Read More…