Rebecca Kapp and Deborah Hunter-Marsh confirm sexual abuse at the hands of their deceased father Walton Hunter, former Bishop in the Mormon Church.

The daughters of Walton Hunter, a now-deceased former Bishop in the Church of Jesus Christ of Latter-day Saints (LDS), have confirmed their father sexually abused them as children.

The confirmation from Walton Hunter’s adult children provides further corroboration of what was reported in Justice Delayed, our initial 2-part investigation into claims of sexual abuse relating to former leadership in the LDS.

In part 2 of our investigation we focus on Walton Hunter — a friend of now-deceased former Mormon President Gordon B. Hinckley and a Bishop in the LDS — and claims that he sexually abused his own daughters. Hunter would eventually be excommunicated from his 2nd bishopship in San Jose, California as a result of these accusations.

The story of sexual and mental abuse at the hands of Walton Hunter is documented in the book Deliver us from Evil written by his adult daughter, Deborah Hunter-Marsh. Published in 2014 by Ms. Hunter-Marsh, the book seems to have gone largely unnoticed, a tragic example of forgotten abuse.

The book doubles as a personal diary with Deborah Hunter-Marsh sharing her father’s family history, his involvement with the church, and, of course, his constant sexual abuse of her and her sister Rebecca Kapp.

Prior to the release of Justice Delayed The Last American Vagabond (TLAV) sought a comment from Deborah Hunter-Marsh and Rebecca Kapp but did not hear back until after publication. Now, the grown daughters of Walton Hunter remain steadfast in their claim that their father raped and molested them throughout their childhood.

When questioned about the choice not to mention Gordon B. Hinckley in her book, Hunter-Marsh said that close friends asked her not to mention Hinckley. She says the main focus was her father so she agreed to leave Hinckley out of the book.

When speaking with Rebecca Kapp on the phone she also confirmed the story of sexual abuse by her father. Regarding Gordon B. Hinckley, Kapp confirmed that she remembers seeing him at her father’s car lot often. She recalls Hinckley asking her father to go on a mission for the LDS when she was 15. Her father declined.

Kapp remains angry with her now-deceased father and mother for their role in sexually abusing her and Deborah, but also for the abuse of her own son.

Deliver Us From Evil describes how after Rebecca became aware of her abuse she continued to allow her children to see their grandparents under the condition that they were never alone at Grandma and Grandpa’s house.

However, when Rebecca was away one afternoon, her 6-year old son “Alex” was left alone in the house with his grandfather. Once he returned to his mother he immediately began displaying various behavioral and learning disabilities. It was later learned that Alex had been sexually abused by his grandfather Walton Hunter. One of Rebecca’s daughters also claims to have witnessed her grandmother, Rebecca and Deborah’s mother, creating the circumstances for the child to be alone with his grandfather.


Rebecca Kapp said the reason she is choosing to speak out now is because “Alex” has passed away in the last 2 years, dying of an overdose. After struggling with mental health issues resulting from his abuse by his grandfather Walton Hunter — as well as another member of the LDS — Alex’s life came to an end.

Kapp said her father attempted to use his religion to absolve himself of responsibility, claiming that he had been forgiven by angels before his death.

“I know in my heart my dad was not just a child molester, he was evil. It extended to other areas of his life. It was anything he could get his hands,” Kapp told TLAV.

In Deliver Us From Evil Deborah Hunter-Marsh also provides documentation of her claims of abuse at the hands of her father, a man who was twice made a bishop in the Mormon Church. 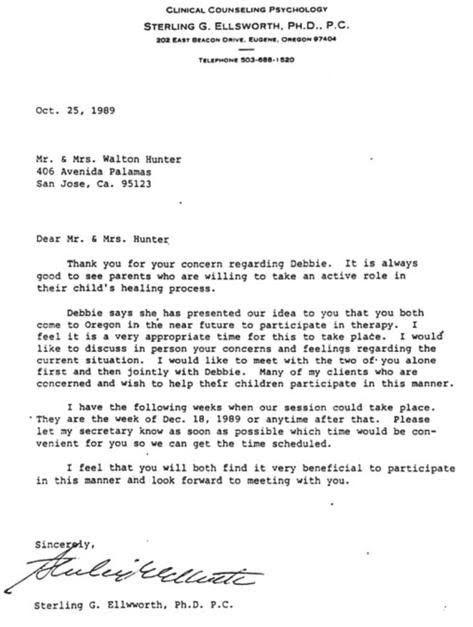 Additionally, when Hunter-Marsh and Rebecca Kapp went to their father’s Stake President in San Diego to share about the sexual abuse by their father they also received a letter in response. The letter, signed by Stake President Gunnerson, invited the women to participate in a Disciplinary Counsel for their father. Walton Hunter would later be excommunicated from the church following the testimony from his daughters. 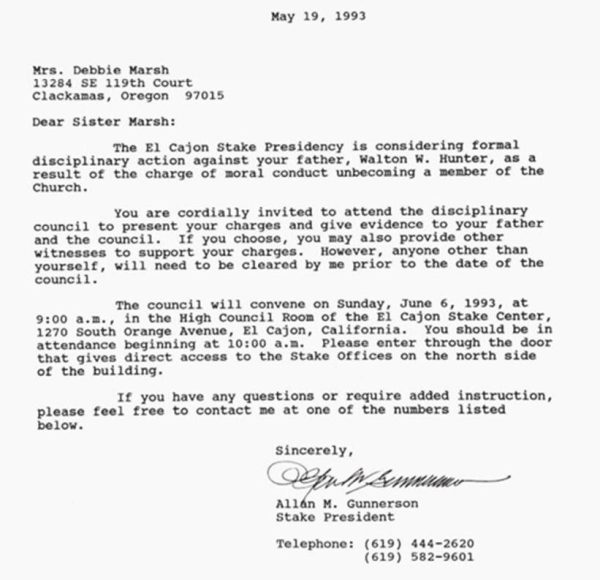 Finally, court records of the civil lawsuit against Walton Hunter further confirm the facts of this case.

Our first report placed this documentary in its historical context and outlined the various witnesses involved in the making of the film. The sexual abuse was said to have taken place in two locations, including an apartment above the Hunter Motor Company owned by Alvin and Walton Hunter.

Our second report introduced the story of Walton Hunter’s daughter Deborah Hunter-Marsh and her claims against her father.

The White House wants to stay the course in Yemen even as the Senate is set to push back against US military support to the Saudi-led bombing campaign. But now a bombshell report reveals the Pentagon has been fueling Saudi and UAE jets free of charge due to “errors in accounting where DoD failed to charge” according Read More…

Welcome to The Daily Wrap Up, a concise show dedicated to bringing you the most relevant independent news, as we see it, from the last 24 hours (8/21/19). As always, take the information discussed in the video below and research it for yourself, and come to your own conclusions. Anyone telling you what the truth Read More…

As Amazon continues to entrench itself as the nation’s commissary, huge government supply deals like the $53 billion Pentagon-Amazon procurement deal Congress is set to authorize leave little room for competitors and raise the specter of government-coddled monopoly. The National Defense Authorization Act (NDAA) for fiscal year 2018, in addition to including passages involving regime Read More…