A couple of days ago we wrote about a group of scientists, which included voting-rights attorney John Bonifaz and J. Alex Halderman, the director of the University of Michigan Center for Computer Security and Society, who announced they had found “persuasive evidence” that results in Wisconsin, Michigan, and Pennsylvania may have been manipulated or hacked.  Of course, they presented absolutely no evidence to support their startling claim other than to point out that Clinton received, on average, 7% fewer votes in counties that used electronic voting machines rather than optical scanners and paper ballots.

Apparently that was all the evidence that Jill Stein needed to be convinced that she might have a chance in Wisconsin, Pennsylvania and Michigan where she received 1.1%, 0.8% and 1.1% of the vote, respectively.  So she started an online funding campaign to raise the millions of dollars required to force the recounts.

So, in less than 1 day, Jill Stein raised over $3mm, which is more than the $2mm needed to force a recount in Wisconsin.  While she attributed the accomplishment to “the power of grassroots organizing,” we would tend to be a little more skeptical and would love to see exactly where those donations came from.  Then again, maybe we’re wrong and there really are just that many disaffected snowflakes out there willing to blow their money on an extreme long shot.

“Congratulations on meeting the recount costs for Wisconsin. Raising money to pay for the first round so quickly is a miraculous feat and a tribute to the power of grassroots organizing,” her campaign said.

“Now that we have nearly completed funding Wisconsin’s recount (which is due on Friday), we can begin to tackle the funding for Michigan’s recount (due Monday) and Pennsylvania’s recount (due Wednesday).”

Stein said Wednesday that many Americans are wondering if the election results were reliable after a “divisive and painful” race and reported hacks into voter and party databases and individual email accounts.

“These concerns need to be investigated before the 2016 presidential election is certified,” she said in a statement released by her campaign. 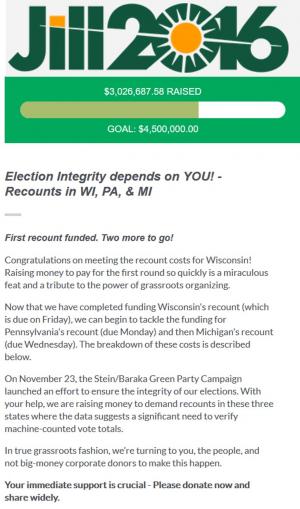 Meanwhile, what the “scientists” and the hopeful NY Mag didn’t report, is exactly which counties in Wisconsin used electronic voting machines vs. paper ballots.  As anyone can easily see by taking a look at the election breakdown in Wisconsin, Trump’s margins of victory were over 40 points in multiple rural counties.  So while 7% may seem like huge margin to a bunch of disaffected Hillary voters, it’s not unreasonable at all once you start to dig into the details.

And, of course, Trump won most of the counties in Wisconsin outside of the major population centers. 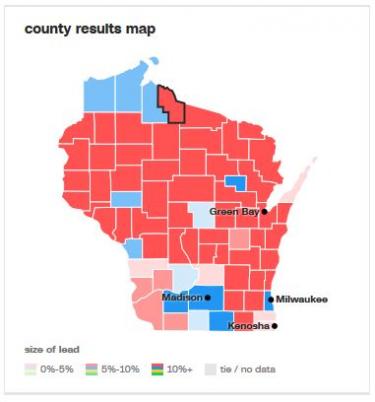 But lets not allow logic to get in the way…onward to Pennsylvania and Michigan!

The total cost of the effort in the three states could be as high as $7 million, her campaign said.

Of course, this all comes after months of Hillary and the left lecturing Donald Trump over his refusal to blindly accept the results of the election….something she repeatedly called “a direct threat to our democracy.”

Meanwhile, it didn’t take long for liberal elites around the country to completely reverse their rhetoric on challenging election results.  Here are some of Paul Krugman’s before and after thoughts:

Welcome to The Daily Wrap Up, a concise show dedicated to bringing you the most relevant independent news, as we see it, from the last 24 hours (7/25/21). As always, take the information discussed in the video below and research it for yourself, and come to your own conclusions. Anyone telling you what the truth Read More…

With all the negativity circulating in the world today it is important to appreciate the positive whenever possible. This is one such story of a little girl who did not let the perception or age constraints in the world of business slow her down or even hinder her steps from acquiring a million dollar deal with Whole Foods Read More…