Ever notice how some stories explode onto the news wires and then—when the official story is exposed as a pack of lies—they just…disappear? Funny how that happens, huh? Well, add another example to the list: the curious case of Arkady Babchenko, better known as “Who’s that?”

Arkady Babchenko is the so-called “journalist” who recently faked his own death in order to prove that the Russians are trying to kill him…or something like that. And if everything had gone according to plan, you can bet your bottom dollar that you would know his name by now.

“Babchenko” would be a rallying cry for Russiagate tinfoil hatters of all stripes, having been plastered all over the front page of the newspapers, endlessly discussed on the 24/7 cable news networks, and tweeted ad nauseum by the Twitterati. It would be deployed as a one word rejoinder to anyone who dares question the neo-neocons and their neo-Cold War propaganda crusade against the neo-“Russian threat.”

But everything did not go according to plan.

You see, the “Vlad the Impaler just assassinated another journalist!” panic party came to an abrupt and awkward end when Babchenko turned up very much alive and well at a press conference to explain that, in fact, he wasn’t dead, exactly. But he would be if the Russians got their way!…or something like that.

The story is very curious indeed, but aside from its Scooby Doo-esque denouement (“…and I would’ve gotten away with it, too, if it weren’t for you meddling Russians“) there is actually quite a lot we can learn from it.

First and foremost, we garner a recipe for how to fake your own death.

To pull it off, all you need is:

Actually, come to think of it, that last one is the most important ingredient in a staged death plot, isn’t it? Better underline that one if you’re taking notes at home.

Yes, the alliterative “Kremlin Critic Killed in Kiev” headlines were proven to be a load of bull sugar by Babchenko’s appearance at a press conference 24 hours after his “murder.” There it was revealed that the whole thing had been a plot cooked up by the Ukrainian security services (the SBU) to catch the dastardly Russian operatives who really were trying to kill him. Honest. 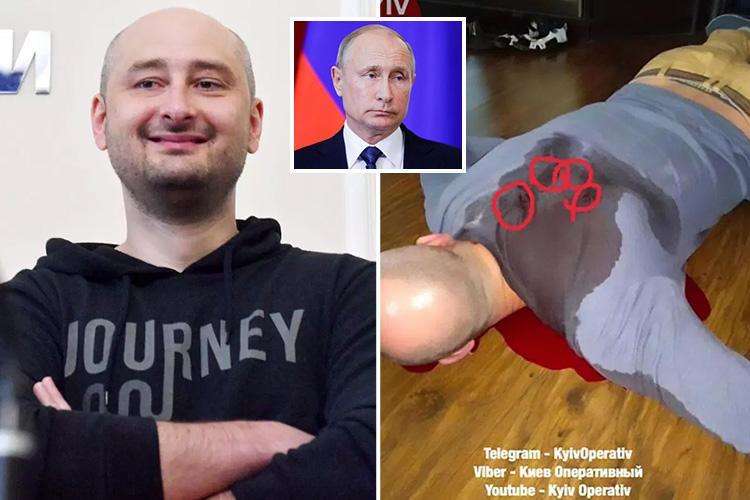 Now, you might be wondering how that actually makes sense. I mean, how does staging Babchenko’s murder somehow help you catch his would-be murderers? What’s the connection there, even?

Well, if you’re wondering that, stop right now! That intrepid MSM talking head, Cathy Newman, beat you to the punch. (Yes, that Cathy Newman.) She pressed Ukraine’s Deputy Prime Minister for European Integration Ivanna Klympush-Tsintsadze for an answer on that very point repeatedly and received nothing but a five minute long hot waffle of nonsense that consisted of a lot of trash talk about Vladimir Putin and the evil Russians, and not one shred of logic as to what this plot was actually about or how it was supposed to work.

But if we persist, we can still learn a thing or two just from the very existence of the plot itself. Think about what the official narrative of this officially-acknowledged false flag event tells us: the SBU are not just passing information to or collecting information from journalists whose reporting align with their foreign policy objectives, they are actively collaborating with those journalists in covert operations that involve deceiving the public by knowingly disseminating false information to them. 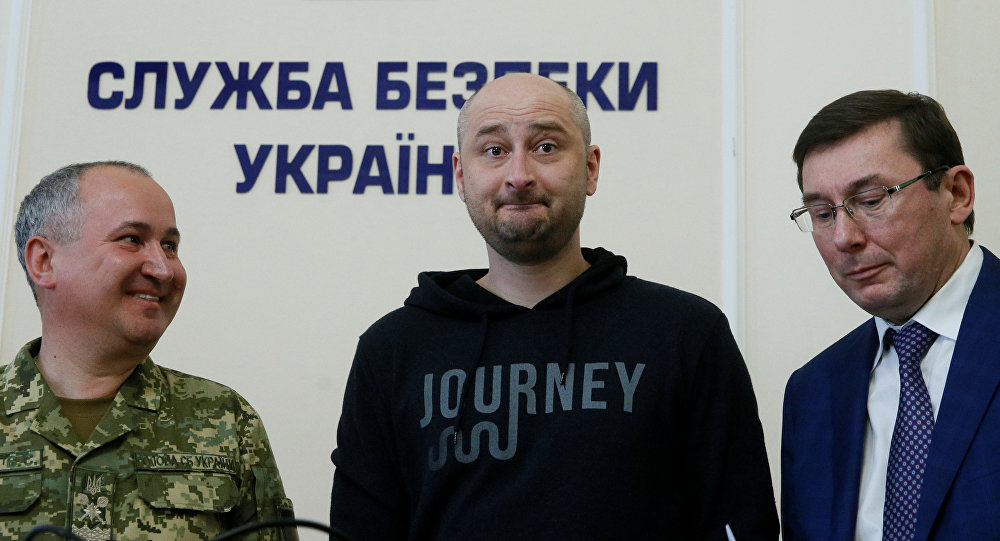 Now I know that absolutely none of those points will be surprising in the least to my regular readers, but you might want to keep this example up your sleeve the next time you’re talking to a hard-headed normie who simply can’t believe that the intelligence agencies would ever collaborate with the mainstream media.

In fact, when you look at the details of the case, the active role of the press in doing the spooks’ dirty work for them becomes even more apparent. Not only did Babchenko himself admittedly cooperate with the SBU in the harebrained plot, but the photo of his “corpse” was first posted online by a former Ukrainian journalist, Yevhen Lauer, who “says he now works for a shadowy consultancy organization based in the Washington, D.C., area.”

As Andrew Korybko of OrientalReview.org explains:

The only way that he [Lauer] could have received that [photo] was from a member of the Ukrainian “deep state” itself, which passed it along to their DC-based asset with the intent of “laundering” the picture through social media and making it “organically” go viral, representing yet another level of collaboration between the “deep state” and so-called “journalists”. Altogether, this false flag involved two separate, but interconnected, influence operations through willing journalist participants, the first and most obvious being Babchenko himself – who can be described more as an information provocateur and even a troll instead of a journalist – and the second DC-based individual who laundered the fake pic of Babchenko’s ”assassination”.

Indeed, this is one of the simplest cases of journalistic collaboration with the deep state to ever occur. It’s straightforward, it’s eye-catching, and—thanks to the plotters’ own idiosyncratic decision to expose their own plot to the world the very next day—it’s undeniable. Which is precisely why the MSM responded to the story with deep introspection and soul-searching about their own culpability in spreading fake news that helps to further a fashionable deep state narrative (namely, “Putin is the root of all evil”).

. . .Oh wait, that’s right. Of course they didn’t. They responded by getting angry that this whole affair only undermines their phony baloney Russiagate nonsense. One gets the impression that the presstitute class would have preferred if Babchenko and his SBU handlers had never revealed the hoax at all.

Too bad for them, the cat’s out of the bag. And although the mainstream repeaters have already tried their Jedi mind trick of using the 24/7 news cycle to sweep the story under the rug, here it is in all its (pig’s) bloody glory. Might I humbly suggest you store the details of this saga in your info arsenal for the next time you need to enlighten someone about what the term “fake news” really means?

The Daily Sheeple Shut Down for Pizzagate Podesta Wikileaks Story

Earlier today The Daily Sheeple was shut down after a third party DCMA violation over a screencap of an Instagram photo post — not the photo itself, but a screen capture of the Instragram post of the photo — was sent directly to our website host to terminate our account, bypassing us completely. The site Read More…

Joining me today is Brian from High Impact Flix, a channel that was removed with an unjustified act of censorship, and the loss of over 500,000 subscribers. His new channel is now called High Impact Vlogs, and is about to be censored yet again, with over 100,000 subscribers, as it currently lingers on the edge Read More…

The COVID Illusion: How COVID-19 Testing (And MSM Hype) Is Creating “The Pandemic That Wasn’t”

This is an excerpt of The Daily Wrap Up 11/22/20. As always, take the information discussed in the video below and research it for yourself, and come to your own conclusions. Anyone telling you what the truth is, or claiming they have the answer, is likely leading you astray, for one reason or another. Stay Read More…