The 20th century was the century of oil. From farm to fork, factory to freeway, there is no aspect of our modern life that has not been shaped by the oil industry. But as the “post-carbon” era of the 21st century comes into view, there are those who see this as the end of the oiligarchy. They couldn’t be more wrong. This is the remarkable true story of the world that Big Oil is creating, and how they plan to bring it about.

Why Big Oil Conquered The World

At the dawn of the 20th century, a new international order was emerging. One founded on oil. And by the end of the 20th century, that order was firmly established. Heating. Transportation. Industrial power. Plastic manufacturing. Pharmaceuticals. There is no facet of modern life that is not, one way or another, dependent on oil.

But the rulers of this oiligarchy–the Rockefellers at Standard Oil, the British royals at BP, the Dutch royals and the Rothschilds at Royal Dutch Shell–were not content with mere financial domination. The power that came with their near-total monopoly on the world’s most important commodity was enormous, and they had no qualms about using that power to re-make the world in their image.

As we saw in “How Big Oil Conquered the World,” the impact of the oiligarchs has been breathtaking. From the education system to the medical profession, from the green revolution to the gene revolution, from World War to the Gulf War, oil money has been used to shape every aspect of the world we live in. With the rise of the petrodollar in the 1970s, even the international monetary system itself rests on oil.

But now, in the 21st century, it seems that the old order, the oil order, is finally coming to an end.

Read the full transcript for “Why Big Oil Conquered The World” at corbettreport.com/bigoil 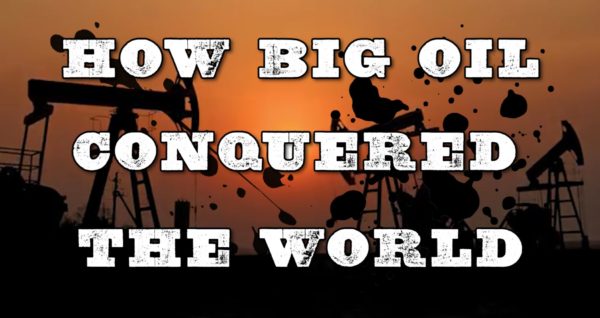 From farm to pharmaceutical, diesel truck to dinner plate, pipeline to plastic product, it is impossible to think of an area of our modern-day lives that is not affected by the oil industry. The story of oil is the story of the modern world. And this is the story of those who helped shape that world, and how the oil-igarchy they created is on the verge of monopolizing life itself.

How Big Oil Conquered The World

Oil. From farm to pharmaceutical, diesel truck to dinner plate, pipeline to plastic product, it is impossible to think of an area of our modern-day lives that is not effected by the petrochemical industry. The story of oil is the story of the modern world.

Parts of that story are well-known: Rockefeller and Standard Oil; the internal combustion engine and the transformation of global transport; the House of Saud and the oil wars in the Middle East.

Other parts are more obscure: the quest for oil and the outbreak of World War I; the petrochemical interests behind modern medicine; the Big Oil money behind the “Green Revolution” and the “Gene Revolution.”

But that story, properly told, begins somewhere unexpected. Not in Pennsylvania with the first commercial drilling operation and the first oil boom, but in the rural backwoods of early 19thcentury New York state. And it doesn’t start with crude oil or its derivatives, but a different product altogether: snake oil.

Read the full transcript for “How Big Oil Conquered The World” at corbettreport.com/episode-310-rise-of-the-oiligarchs/

This week, corporate media heads exploded when controversial rapper Kanye West met with the even more controversial President-elect Donald Trump. The media took the opportunity both to provide its typical frenzied coverage of a superficial, celebrity incident and to blast the president-elect for taking the time to meet with West. NBC and other mainstream outlets reported Read More…

The Israeli army on Friday attacked two positions in the blockaded Gaza Strip, after the IDF claimed its forces came under fire near the Gaza-Israel buffer zone. No one was injured in the exchange.  According to one Israeli army statement, two Hamas “military positions” were targeted by airstrikes and tank-fire. While The Times of Israel Read More…

Originally Published on February 10, 2016  “That’s why we look behind appearances, see the world like the eye on the pyramids” – Raiza Biza In today’s society, “magic” and “religion” have become loaded words. From a scientific perspective, they have become akin to fairy-tales, folklore, and psychological simplicity. Those who find the value in it are sometimes Read More…