Hillary Clinton, however, the Democratic presidential nominee in this year’s election and former Secretary of State, deleted 30,000+ emails from a private server and has received no reprimand from the FBI. In fact, on Tuesday, FBI Director James Comey told the press that he would not recommend criminal charges against Clinton for using private email servers during her time as secretary of State.

Edward Snowden wasn’t the only American left speechless by the decision, but his Tweet definitely summarized what most people were thinking: 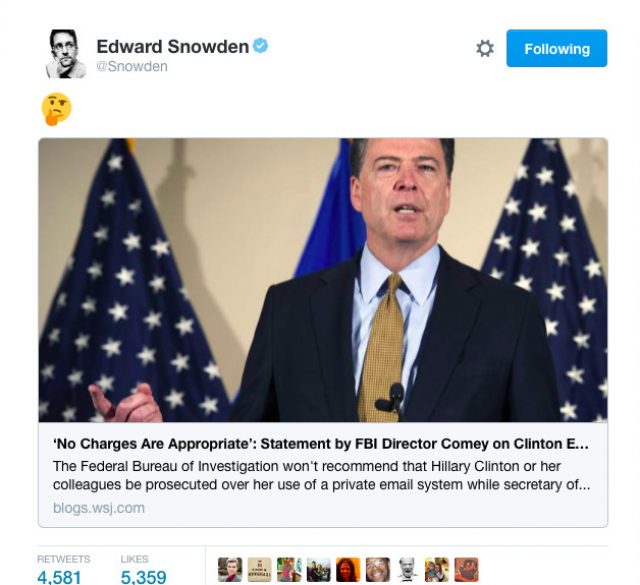 When Snowden first fled the country in 2013, Clinton stated that she could never condone what he did. She said the former NSA employee was a “Traitor” who had “blood on his hands,” reports DailyCaller.

Again, intriguing, considering that the war criminal is to blame for destabilizing Haiti and making Libya a failed state – among other unsavory accomplishments. Edward Snowden’s crime was to enlighten the public on the fact that they aren’t as free as they think, but Clinton’s actions have earned her a spot as the potential President of the United States.

If anything, 2016 seems to be the year Americans find out just how corrupt their government is and the extent to which the political system is rigged.

Break classification rules for the public’s benefit, and you could be exiled.

Do it for personal benefit, and you could be President.

Five-hundred fifty-eight days after targeting an ostensive headquarters of the Islamic State in Mosul, Iraq, the United States finally admitted to bombing a family home and killing a university professor and three family members, wounding at least two more — even though the coalition suspected mere hours after the attack the ill-begotten mission had snuffed out the lives of Read More…

America Breaks Down: The Anatomy Of A National Nervous Breakdown

“This country has been having a nationwide nervous breakdown since 9/11. A nation of people suddenly broke, the market economy goes to shit, and they’re threatened on every side by an unknown, sinister enemy. But I don’t think fear is a very effective way of dealing with things–of responding to reality. Fear is just another Read More…

The Israeli Occupation is once again testing a strange new and unknown weapon on civilians protesting the illegal siege on Gaza, at the separation barrier fence last Friday. Below is video footage of this new weapon technology. Have you seen anything like this before? Also on Friday, a 14-year-old child inhaled an unknown neurotoxin that Read More…