It’s been just over one year since the liberation of Aleppo from radical Islamist insurgent groups which were backed by the West as well as Gulf states like Saudi Arabia and Qatar. And this Christmas has witnessed huge public celebrations, tree lightings, concerts, and dances in a city which only a short while ago was associated with death, mortars, airstrikes, assassinations, and suicide bombings.

Though occasional mortar fire and explosions still enter the city environs, Christmas 2017 has been marked by carefree exuberance and a sense of relief as the city rebuilds, and as some 600,000 displaced residents return to reclaim properties and possessions, ready to resume their normal lives again.

But one wonders: should the al-Qaeda linked fighters who once occupied the eastern part of Aleppo have been victorious and imposed their ‘revolution’ on the whole of the city… would Aleppines be celebrating Christmas this year? The answer to this question is of course an obvious no.

Merry Christmas ? to all of you ?
Pics from #Aleppo ? pic.twitter.com/58ZQhGpqp6

Looking back to the time of the most intense phase of fighting in Aleppo as it unfolded in 2016, veteran journalist Stephen Kinzer took to the editorial pages of the Boston Globe to remind Americans that the media had created a fantasy land concerning Syria. Kinzer painted a picture quite opposite the common perception.

Coverage of the Syrian war will be remembered as one of the most shameful episodes in the history of the American press… For three years, violent militants have run Aleppo. Their rule began with a wave of repression. They posted notices warning residents: “Don’t send your children to school. If you do, we will get the backpack and you will get the coffin.” Then they destroyed factories, hoping that unemployed workers would have no recourse other than to become fighters. They trucked looted machinery to Turkey and sold it…

The United States has the power to decree the death of nations. It can do so with popular support because many Americans — and many journalists — are content with the official story.

Now, during the first full Christmas season of relative peace and calm, Aleppo residents are showing the world that they’ve rejected a future of Saudi-style Wahhabi Islamist rebel rule imposed from outside, instead proudly displaying their pluralistic culture and toleration through mass public Christmas displays in the heart of the Middle East. 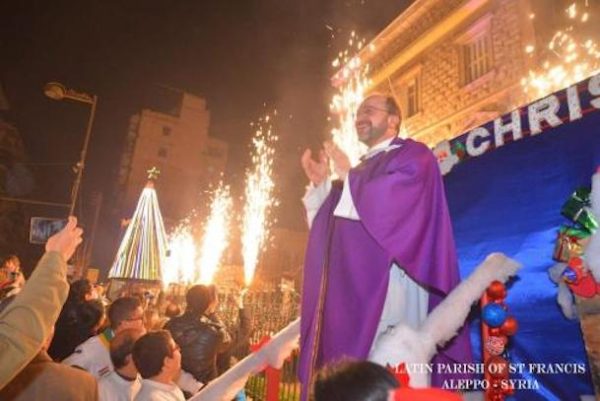 Aleppo has, for many centuries going back through the middle ages, been home to one of the largest Christian populations in the Middle East – a religious demographic which was under direct threat from the armed opposition groups which attacked the city starting in July of 2012. Beyond the Christian community, Syrians of all backgrounds have also traditionally participated in public festivities connected with Christmas – something long encouraged by the ruling secular nationalist Baathist government.

Indeed, Syrian urban centers have for decades been marked by a quasi-secular culture and public life of pluralist co-existence. Aleppo itself was always a thriving merchant center where a typical street scene would involve women without head-coverings walking side by side with women wearing veils (hijab), cinemas and liquor stores, late night hookah smoke filled cafés, and large churches and mosques neighboring each other with various communities living in peaceful co-existence.

Christmas in Aleppo!!! do you really think if Aleppo had fallen to the NATO backed jihadis, this would have been possible?????? #Syria #Christmas pic.twitter.com/DXvBn2tot0

And by many accounts, the once vibrant secular and pluralist Aleppo is now coming back to life – today’s street scenes in Aleppo and throughout many major Syrian cities recently liberated from ISIS and the scourge of al-Qaeda insurgents look pretty much like scenes straight out any other place on the globe where Christmas is celebrated.

And like many places in the West, Syrians just want to be left alone to celebrate Christmas without jihadists or foreign nations occupying territory within their borders.

Below are images and video clips of Christmas displays and parties throughout other cities and villages in Syria.
Merry Christmas from liberated Syria!…

Christmas in Homs. The city has one of the largest Christian communities in Syria. The war has destroyed large parts of the city, but despite the destruction people haven’t lost their Christmas spirit. pic.twitter.com/8Do6WsaxJI

Children in Mhardeh celebrate Christmas. Mhardeh is the largest Christian city in Syria and hosts a very large population of displaced Syrians from all religions. pic.twitter.com/G9o8wdThDY

It has now been exposed, with the release of the full video below, that the supposed “Trump Protester” calling for the government to be sued and the Electoral College to simply elect Clinton instead, was in fact a CNN camera man. Many were immediately suspicious of such a boisterous and over-the-top video, and it seems that Read More…

Beginner’s Guide to Metaphysics – Part 6: The Mystery Initiations of Greece and Egypt

Originally posted April 15, 2016 The “Mysteries” of ancient Greece and Egypt were, in a sense, the original formation of secret societies with ancient knowledge, and were the original formation of this knowledge concentrated within family blood lines. However, this is not meant to demonize the Mystery Initiations with such an equation, but Freemasonry would Read More…