Someone finally asked Obama administration officials to own up to the rise of ISIS and arming jihadists in Syria.

In a wide ranging interview titled “Confronting the Consequences of Obama’s Foreign Policy” The Intercept’s Mehdi Hasan put the question to Ben Rhodes, who served as longtime deputy national security adviser at the White House under Obama and is now promoting his newly published book, The World As It Is: Inside the Obama White House. 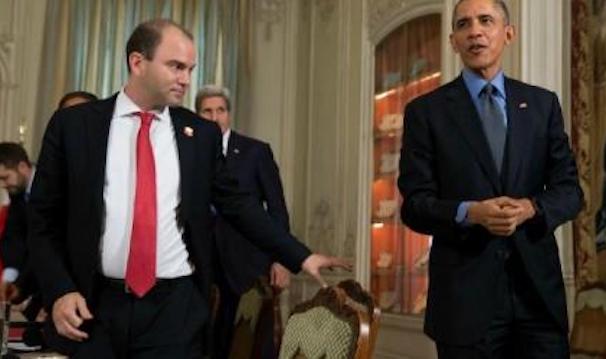 Rhodes has been described as being so trusted and close to Obama that he was “in the room” for almost every foreign policy decision of significance that Obama made during his eight years in office. While the Intercept interview is worth listening to in full, it’s the segment on Syria that caught our attention.

In spite of Rhodes trying to dance around the issue, he sheepishly answers in the affirmative when Mehdi Hasan asks the following question about supporting jihadists in Syria:

Did you intervene too much in Syria? Because the CIA spent hundreds of millions of dollars funding and arming anti-Assad rebels, a lot of those arms, as you know, ended up in the hands of jihadist groups, some even in the hands of ISIS.

Your critics would say you exacerbated that proxy war in Syria; you prolonged the conflict in Syria; you ended up bolstering jihadists.

Rhodes initially rambles about his book and “second guessing” Syria policy in avoidance of the question. But Hasan pulls him back with the following: “Oh, come on, but you were coordinating a lot of their arms.”

The two spar over Hasan’s charge of “bolstering jihadists” in the following key section of the interview, at the end of which Rhodes reluctantly answers “yeah…” — but while trying to pass ultimate blame onto US allies Turkey, Qatar, and Saudi Arabia (similar to what Vice President Biden did in a 2014 speech):

MH: Oh, come on, but you were coordinating a lot of their arms. You know, the U.S. was heavily involved in that war with the Saudis and the Qataris and the Turks.

BR: Well, I was going to say: Turkey, Qatar, Saudi.

MH: You were in there as well.

BR: Yeah, but, the fact of the matter is that once it kind of devolved into kind of a sectarian-based civil war with different sides fighting for their perceived survival, I think we, the ability to bring that type of situation to close, and part of what I wrestled with in the book is the limits of our ability to pull a lever and make killing like that stop once it’s underway.

To our knowledge this is the only time a major media organization has directly asked a high ranking foreign policy adviser from the Obama administration to own up to the years long White House support to jihadists in Syria.

Though the interview was published Friday, its significance went without notice or comment in the mainstream media over the weekend (perhaps predictably). Instead, what did circulate was a Newsweek article mocking “conspiracy theories” surrounding the rapid rise of ISIS, including the following:

President Donald Trump has done little to dispel the myth of direct American support for ISIS since he took office. On the campaign trail in 2016, Trump claimed—without providing any evidence—that President Obama and then-Secretary of State Hillary Clinton co-founded the group and that ISIS “honors” the former president.

Of course, the truth is a bit more nuanced than that, as Trump himself elsewhere seemed to acknowledge, and which ultimately led to the president reportedly shutting down the CIA’s covert Syrian regime change program in the summer of 2017 while complaining to aides about the shocking brutality of the CIA-trained “rebels.”

Meanwhile, mainstream media has been content to float the falsehood that President Obama’s legacy is that he “stayed out” of Syria, instead merely approving some negligible level of aid to so-called “moderate” rebels who were fighting both Assad and (supposedly) the Islamic State. Rhodes has himself in prior interviews attempted to portray Obama as wisely staying “on the sidelines” in Syria.

But as we’ve pointed out many times over the years, this narrative ignores and seeks to whitewash possibly the largest CIA covert program in history, started by Obama, which armed and funded a jihadist insurgency bent of overthrowing Assad to the tune of $1 billion a year (one-fifteenth of the CIA’s publicly known budget according to leaked Edward Snowden documents revealed by the Washington Post).

It also ignores the well established fact, documented in both US intelligence reports and authenticated battlefield footage, that ISIS and the Free Syrian Army (FSA) jointly fought under a single US-backed command structure during the early years of the war in Syria, even as late as throughout 2013 — something confirmed by University of Oklahoma professor Joshua Landis, widely considered to be the world’s foremost expert on Syria.

Syria experts, as well as a New York Times report which largely passed without notice, verified the below footage from 2013 showing then US Ambassador to Syria Robert Ford working closely with a “rebel” leader who exercised operational command over known ISIS terrorists (Ambassador Ford has since acknowledged the relationship to McClatchy News):

As host of Al Jazeera’s Head to Head, Hasan asked the former head of Pentagon intelligence under Obama, General Michael Flynn, who is to blame for the rise of ISIS? (the August 2015 interview was significantly prior to Flynn joining Trump’s campaign).

Hasan presented Flynn with the 2012 Defense Intelligence Agency (DIA) declassified memo revealing Washington support to al-Qaeda and ISIS terrorists in Syria in order to counter both Assad and Iran. Flynn affirmed Hasan’s charge that it was “a willful decision to support an insurgency that had Salafists, Al Qaeda and the Muslim Brotherhood…”.

Soon after, The Intercept’s Glenn Greenwald appeared on Democracy Now to discuss the shocking contents of the Flynn interview:

It will be interesting to see years from now which “narrative” concerning Obama’s legacy in the Syrian conflict future historians choose to emphasize.

Below is the relevant excerpt covering Syria from the 26-minute Intercept interview with Obama deputy national-security adviser Ben Rhodes [bold emphasis ours].

The audio is available here — Mehdi Hasan begins questioning Rhodes about Syria and ISIS at the 19-minute mark.

Mehdi Hasan: My guest today was at President Obama’s side every step of the way over the course of those two terms in office. Ben Rhodes joined the Obama election campaign in 2007 as a foreign-policy speechwriter, when he was just 29, and rose to become a deputy national-security adviser at the White House, who was so intellectually and ideologically close to his boss that he was often described as having a mind-meld with Obama.

Ben, who currently works at the Obama Foundation, has written a new book, “The World as It Is: A Memoir of the Obama White House.” And earlier this week I interviewed him about Obama’s rather contentious foreign policy record…

MH: But Ben, here’s what I don’t get, if you’re saying this about Afghanistan and prolonged conflict, all of which I don’t disagree with what you’re saying. How do you, then, explain Syria? Because you’ve been criticized a lot. I’ve been listening to your interviews on the book tour; you talk about in the book about how you were criticized for not doing enough on Syria. I remember being an event in D.C. a couple years ago where Syrian opposition members were berating you for not doing enough at an event, and you often were the public face who came out and defended Obama. I want to come to the other direction and say: Did you intervene too much in Syria? Because the CIA spent hundreds of millions of dollars funding and arming anti-Assad rebels, a lot of those arms, as you know, ended up in the hands of jihadist groups, some even in the hands of ISIS. Your critics would say you exacerbated that proxy war in Syria; you prolonged the conflict in Syria; you ended up bolstering jihadists.

Ben Rhodes: Well, what I try to do in the book is, you know, essentially raise — all the second guessing on Syria tends to be not what you expressed, Mehdi, but the notion that we should’ve taken military action.

BR: What I do in the book is I try to look back at 2011 and 2012, was there a diplomatic window that we missed or that we, in some ways, escalated its closure by pivoting to the call for Assad to go — which obviously I believe should happen, I believe Assad has been a terrible leader for Syria and has brutalized his people — but, you know, was there a diplomatic initiative that could have been taken to try to avert or at least minimize the extent of the civil war. Because, you know, what ended up happening essentially there is, you know, we were probably too optimistic that, you know, after Mubarak went and Ben Ali and eventually Saleh and Gaddafi, that you would have a situation where Assad would go. And, you know, not factoring in enough the assistance he was going to get from Russia and Iran, combined with his own nihilism, and how that could lead him to survive. So I do look back at that potentially missed diplomatic opportunity.

On the support of the opposition, you know, I don’t know that I would give us that much agency. There are a lot of people putting arms into Syria, funding all sorts of —

MH: Oh, come on, but you were coordinating a lot of their arms. You know, the U.S. was heavily involved in that war with the Saudis and the Qataris and the Turks.

BR: Well, I was going to say: Turkey, Qatar, Saudi.

MH: You were in there as well.

BR: Yeah, but, the fact of the matter is that once it kind of devolved into kind of a sectarian-based civil war with different sides fighting for their perceived survival, I think we, the ability to bring that type of situation to close, and part of what I wrestled with in the book is the limits of our ability to pull a lever and make killing like that stop once it’s underway.

So that’s why I still look to that initial opening window. I also describe, there was a slight absurdity in the fact that we were debating options to provide military support to the opposition at the same time that we were deciding to designate al-Nusra, a big chunk of that opposition, as a terrorist organization. So there was kind of a schizophrenia that’s inherent in a lot of U.S. foreign policy that came to a head in Syria.

24 Civilians, Including Children, Killed In Yemen By US-Backed Saudi/UAE Airstrikes With US-Made Bombs

Reports coming in from Hussain Albukhaiti on the ground in Yemen are confirming that 21 civilian lives have been taken due to a US-backed airstrike on Okra Okro farm in Beit al-Faqih, East Hodeida, and 3 more civilians including a child were killed with a US-made MK 82 bomb in Hodeida City. While the majority Read More…

Trump Vows To Leave “Strong And Lasting” US Footprint In Syria

Just a month after another brief public flirtation with the idea of withdrawing from Syria, President Trump once again said he wants US troops out of Syria, promising “big decisions” very soon. His first talk of a pullout was scrapped days later. This time, he backtracked almost instantly. With French President Emmanuel Macron in tow, Read More…