Toxic Particles To Be Sprayed Into The Atmosphere In An MIT Geoengineering Experiment, Blocking Sunlight

If you’re concerned about our environment, geoengineering is something you need to be aware of. The sad reality is that most have no idea it’s happening, which is why it’s crucial to create more awareness on a subject about which the public has been kept completely in the dark.

What is exactly is geoengineering? It’s the deliberate and large-scale intervention into the Earth’s climatic system. It’s done through various means, one of which is spraying chemicals into the atmosphere via planes or balloons.

For years, climate change and other environmental problems have been labelled as a “national security” issue, a phrase that’s now used to keep information from the public. The CIA and other federal agencies control these programs, which means that if they are already spraying substances into the atmosphere, we would never hear about it.

That being said, there is a lot of information out there that suggests these programs have been in place, or have at least been being discussed, for a very long time. For example, a 1996 report conducted by top military personnel in the U.S., titled “Weather as a Force Multiplier; Owning the Weather in 2025,” reveals the supposed urgency to implement these programs.

A United States government document printed at the request of the United States Senate Committee on Commerce, Science and Transportation in November of 1978 states:

What’s more, former CIA director John O. Brennan recently discussed the topic publicly and announced his support for these programs while speaking at the Council on Foreign Relations. (source)

The international community has expressed their concern as well. For example, HRH Princess Basmah bint Saud al Saud dubbed geoengineering a “weapon of mass destruction.” She did so at the Istanbul Security Conference on December 5th, 2015, where she gave a keynote speech on “Global Justice and Ethics in the Changing World Order.” You can watch that, and read more about it here. (The interviewer of the Saudi Princess was Patrick Roddie of StopSprayingUs.com – watch a full interview with Patrick discussing his research and his upcoming study on the lethal effects of geoengineering on humanity: “Long-Term Effects of Proposed Geoengineering Solutions.”)

More recently, the Massachusetts Institute of Technology (MIT) published a review stating that Harvard scientists are moving forward with plans for atmospheric geoengineering experiments. The researchers intend to launch a high-altitude balloon that would spray a small quantity of reflective particles into the atmosphere in a proposed plan to combat global warming.

According to the MIT review, “They would be among the earliest official geoengineering-related experiments conducted outside of a controlled laboratory or computer model, underscoring the growing sense of urgency among scientists to begin seriously studying the possibility as the threat of climate change mounts.”

This statement is false. This may be one of the first times an experiment like this has gone public, but it’s not the first of its kind. Perhaps the only other time this type of activity has been made public was in China for the 2008, where they used weather manipulation via geoengineering to create ideal weather for the Olympics. To me, this seems like a grossly irresponsible us of technology. (source)

What Are They Going to Spray?

Using a high-altitude balloon tethered to a gondola with sensors and propellers, they are going to spray sulfur dioxide, alumina, and calcium carbonate into the stratosphere. The sensors are there to record data, and measure the particles’ ability to reflect sunlight away from our planet.

These choices are unsurprising. If we look we look at SPICE, for instance, a United Kingdom government-funded geoengineering research project that collaborates with the Universities of Oxford, Cambridge, Edinburgh, and Bristol, they propose spraying the following particles into the air: Sulphate/Sulphuric Acid/Sulphur Dioxide, Titania, Silicon Carbide, Calcium Carbonate, Alumina, Silica, and Zinc Oxide.

The goal of these programs is indeed to block the sun-light from hitting the Earth’s surface. 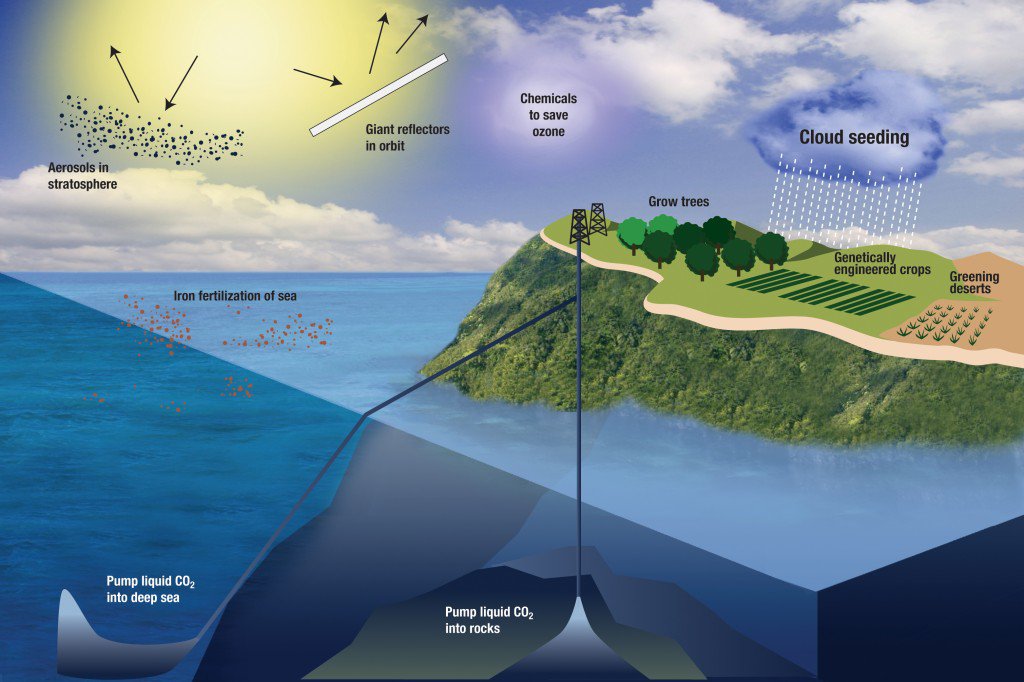 Many scientists are raising concerns about geoengineering. One of them is Dr. Marvin Herndon, a nuclear chemist, geochemist, and cosmochemist, most noted for deducing the composition of the inner core of the Earth (it being nickel silicide rather than partially crystallized nickel-iron metal). He published a paper in the peer-reviewed journal Current Science (Indian Academy of Sciences) titled “Aluminum poisoning of humanity and Earth’s biota by clandestine geoengineering activity: Implications for India” that demonstrates how dangerous geoengineering is to the health of both humans and the environment.

In the paper, he brings up evidence of clandestine geoengineering activity that has been occurring for at least 15 years. He claims that this geoengineering via tanker-jet aircraft is responsible for dumping toxic substances into the Earth’s atmosphere. He hypothesizes that the increase in neurological diseases and increasing destruction of Earth’s biota can be linked to geoengineering activity, among other things.  (source)(source)

The paper cites multiple publications that have identified heavy metals like aluminum, barium, and strontium in rainwater.

Another example comes from Dr. Rose Cairns, PhD., who belongs to the University of Leeds School of Earth and Environment. She published a paper in the peer-reviewed journal Geophysical Journal entitled “Climates of suspicion: ‘chemtrail’ conspiracy narratives and the international politics of geoengineering.”

In her paper, she discusses developments in mainstream academic and political discourse regarding geoengineering, and how climate modification, also being discussed by the citizens of the world (who use the term “chemtrails”), is having devastating ecological and health effects worldwide. According to her paper, it’s essential that we understand the “emerging politics of geoengineering” and to take claims regarding the importance of public participation seriously.

She emphasizes that this issue requires “an understanding of the whole discursive landscape around ideas of global climate control, including marginal ideas such as those held by chemtrail activists.” Furthermore, she expresses quite clearly that these ideas should not be ignored or dismissed “out of hand as pathological or paranoid” and that “chemtrails” and the public’s perception of them can reveal insights about the emerging politics of geoengineering. (source)

Why Go Public Now? The Shift In Consciousness

As mentioned earlier, the evidence points to the fact that yes, clandestine geo-engineering activities have taken place. So, why is all of this information emerging into the mainstream now? One reason is because at some point, some things just become so obvious that the mainstream has no choice but to address it. If the masses are bringing up concerns and credible sources are presented to a large audience, even the most tightly held secrets can’t remain concealed.

More and more people every single year are waking up to the fact that many ‘conspiracy theories’ aren’t really conspiracies anymore. The NSA Snowden leaks on mass surveillance, or WikiLeaks, are perhaps the best example of this. Another is the fact that dozens of governments have admitted to the reality of Unidentified Flying Objects performing maneuvers no known aircraft is capable of. We are starting to see that a lot of fraud and misinformation has plagued this planet for the sake of corporate interest and greed.

We are finally starting to open our eyes, and if you are asking yourself, “How do we stop it?” just know that the simple fact of being aware is a necessary catalyst that will spark action. Take GMO food, for example — most countries around the world have completely banned them, and numerous environmental and health concerns via public awareness created those initiatives.

As awareness about our world grows, even when certain ideas are difficult to accept and push the limits of our belief systems, consciousness shifts. Our perceptions, thoughts, and feelings about our planet change, and when you factor in all of the science showing that consciousness can impact our physical material world, you will get something special happening.

More people are starting to care about the planet, and that is a very encouraging thought.

The Politics of Climate Change

Below is an excellent snippet of a lecture given by Richard Lindzen, one of the world’s top experts in the field and lead author of “Physical Climate Processes and Feedbacks,” Chapter 7 of the Intergovernmental Panel on Climate Change’s Third Assessment Report on climate change. He knows that all climate science we receive is IPCC United Nations science. One of the scientists mentioned on the senator’s list, in this video, he talks about the politics of climate science and the manipulation of data — something that plagues all fields of science today.

What In The World Are They Spraying? (Full Length)

Why In The World Are They Spraying? (Full Length)

Obtained from the National Archives. A United States government document printed at the request of the United States Senate Committee on Commerce, Science and Transportation in November 1978.

Obtained from the NASA archives, a document prepared for the Interdepartmental Committee For Atmospheric Sciences. Prepared by Homer E. Newell,  a mathematics professor and author who became a powerful United States government science administrator — eventually rising to the number three position at the National Aeronautics and Space Administration (NASA) in the early 1960s.

A history of weather modification programs prepared by Dr. Vermeeren, Professor at the Delft University of Technology Faculty of Industrial Design Engineering. It’s a 300-page scientific report titled “CASE ORANGE: Contrail Science, Its Impact on Climate and Weather Manipulation Programs Conducted by the United States and Its Allies.” It was prepared for the Belfort Group by a team of scientists but presented anonymously. It was sent to embassies, news organizations, and interested groups around the world “to force public debate.”

In 2009, researchers published “Modification of Cirrus clouds to reduce global warming,” which proposed two methods of delivery for this same proportion of metallics to silica and the same staying power of one to two weeks. The report notes that “the proposed scenario by the IPCC [Intergovernmental Panel on Climate Change] in 2001 is identical to the claims” in Hughes Aircraft’s 1991 patent. Hughes was acquired by Raytheon, a private defense contractor, in 1997, “the same company that acquired E-systems and the HAARP contract.”

The patent referenced above is linked within the article.

A 1996 report by top military personnel in the U.S., “Weather as a Force Multiplier: Owning the Weather in 2025” to evidentiary details (like governmental spraying schedules, chemical orders, correct nomenclature used in airline operating manuals, and calls for geoengineering by economists) to support its notion of “heavy involvement of governments at the top level in climate control projects.”

In 2007, the World Meteorological Organization (WMO) published a statement that included “Guidelines for the Planning of Weather Modification Activities,” acknowledging that though the modern technology of weather modification began in the 1940s, it is still “an emerging technology.”

I joined the CE team in 2010 shortly after finishing university and have been grateful for the fact that I have been able to do this ever since :) There are many things happening on the planet that don't resonate with me, and I wanted to do what I could to play a role in creating change. It's been great making changes in my own life and creating awareness and I look forward to more projects that move beyond awareness and into action and implementation. So stay tuned :) arjun@collective-evolution.com

US General Finally Admits That Troops Are “Fighting And Dying” In Iraq
April 29, 2016