Russia said it’s ready to send peacekeepers to Syria after Turkey and Iran agreed on Thursday to Russia’s proposal for “de-escalation zones” in Syria. The move, welcomed by the United Nations, has been met with skepticism from the United States as the so-called safe-zones will be closed for warplanes of the United States and those of the U.S.-led coalition.

As Bloomberg reports, the three countries signed a memorandum on the creation of so-called de-escalation areas on Thursday after two days of talks in Kazakhstan that also included representatives of the Syrian government and rebel groups. 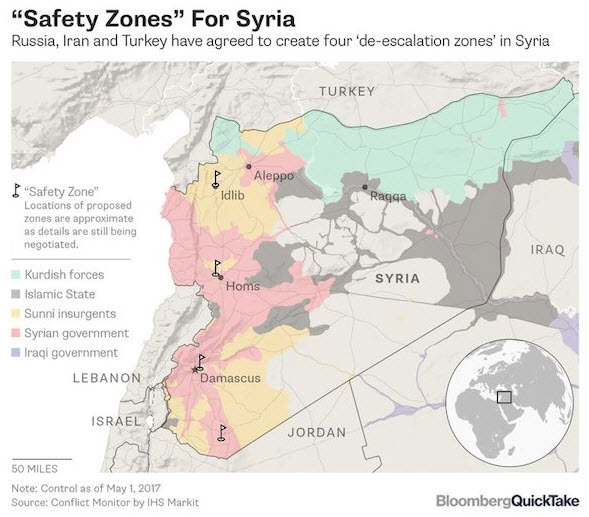 Opposition leaders distanced themselves from the plan, saying they can’t accept Iran as a guarantor of the truce and that they want “clear and tangible” guarantees the deal will be enforced.

The U.S. also expressed doubts, as State Department spokeswoman Heather Nauert said Thursday that the U.S. has “concerns” about the accord, “including the involvement of Iran as a so-called “guarantor,”’ and said Russia should do more to stop violence.

The four safe zones to be established in Syria will be closed for flights by US-led coalition warplanes, said the Russian envoy to the Astana peace talks, where the zones were agreed upon.

“Russia is ready to send its observers” to help enforce the safe zones, President Vladimir Putin’s envoy to Syria, Alexander Lavrentiev, told reporters in the Kazakh capital. “We believe the Syrian crisis can only be resolved through political methods.”

“As for [the coalition] actions in the de-escalation zones, starting from now those zones are closed for their flights,” Aleksandr Levrentyev told journalists in the Kazakh capital.

The Russian Ministry of Defense notes that the deal on safe zones in Syria will come into effect 21:00 GMT on May 5.

We wonder how long Washington will stand for what effectively amounts to a “no-fly zone” against U.S. war planes over parts of Syria.

The global resistance against Genetically Modified Crops is growing at an exponential rate. A few years ago, you were almost ridiculed for suggesting that GM foods could be a problem, and now scientists and researchers are presenting information that has 19 new countries joining an already long list of nations to completely ban, or have severe restrictions Read More…

The Establishment’s Plan to Divide Part 2: COVID-19, Election 2020, and The Great Reset

With the American public only weeks away from the 2020 presidential election it’s time to examine the narratives that are being crafted. This article is part 2 in a series which I started in December 2016, just weeks after Donald Trump was elected President of the United States. In that first piece, I argued that Read More…

Welcome to The Daily Wrap Up, a concise show dedicated to bringing you the most relevant independent news, as we see it, from the last 24 hours (8/19/18). Yesterday marked the 65th anniversary of when the US, in conjunction with the UK, carried out a coup in Iran, wildly destabilizing the county (by design), overthrowing Read More…