“Wealth is moving rapidly to concentrate at the tippy, tippy top of the pyramid,” said Gawain Kripke, the director of policy and research at Oxfam America.

The world’s 62 richest billionaires have as much wealth as the bottom half of the world’s population, according to a new report from Oxfam International. Wealth inequality has been an issue that has gained attention in recent years due to the continually increasing gap between the top 1% and the rest of the world. The wealthiest individuals have watched as their net worth soared in the last five years, at a rate never before seen. In 2010 it was about 388 people who had the same wealth as half the world. Today, a year earlier than Oxfam had predicted, the top 1% now own more than everyone else combined. 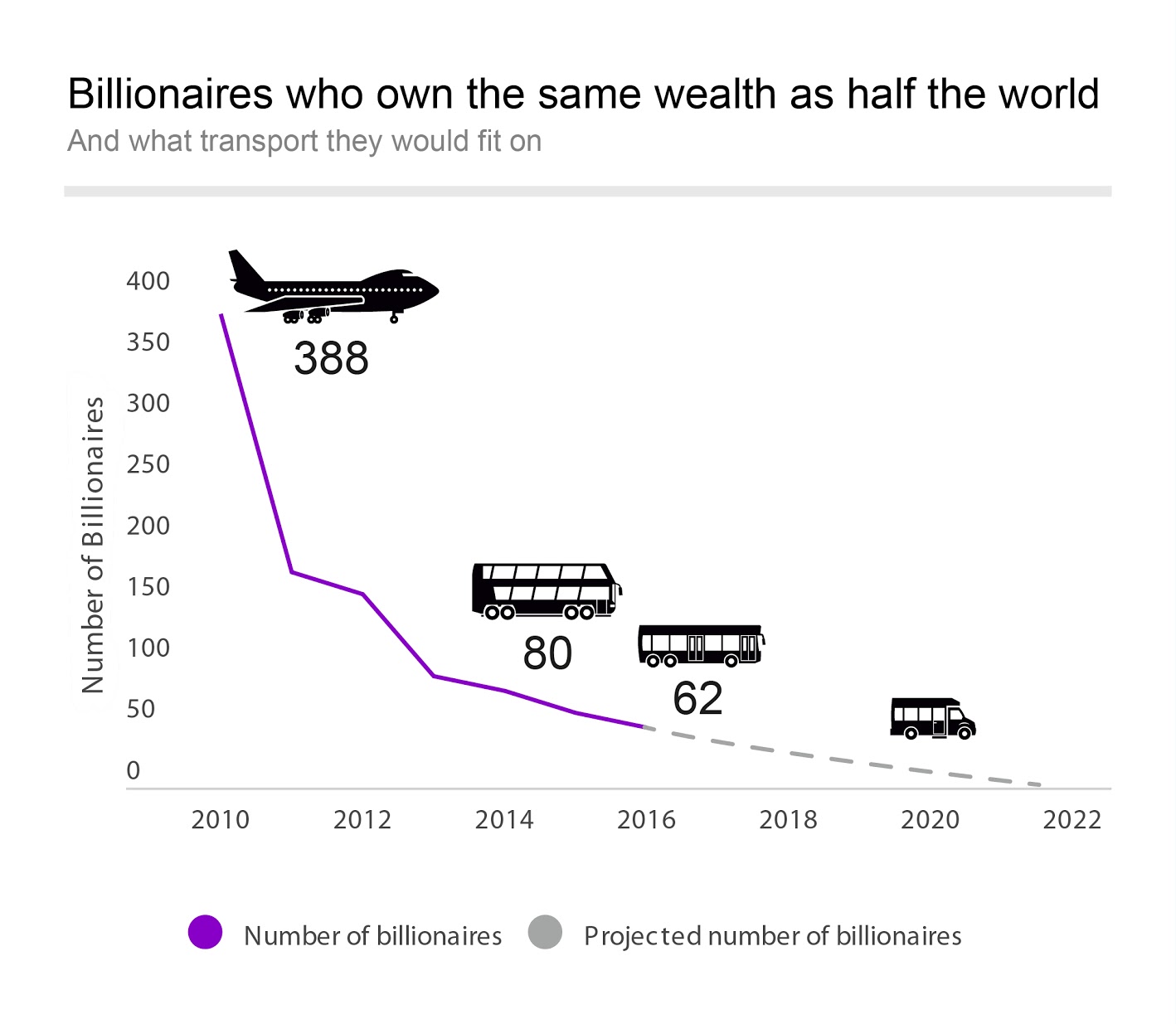 To coincide with the yearly gathering of political and financial leaders in Davos for the World Economic Forum, Oxfam International released its report showing how the wealth gap is continuing to grow and has done so in the last five years at an alarming rate.

The report shows how a “broken” economic model with a foundation of deregulation, privatization and financial secrecy has allowed for the wealth of the richest 62 people to dramatically increase by 44% in five years to $1.76 trillion. In that time, the wealth of the poorest 3.6 billion people plunged by 41%.

“The big winners in our global economy are those at the top. Our economic system is heavily skewed in their favour. Far from trickling down, income and wealth are instead being sucked upwards at an alarming rate,” the report said.

Oxfam acknowledged that efforts to decrease wealth inequality had seen the number of people living below the extreme poverty line halved between 1990 and 2010.

“Yet had inequality within countries not grown during that period, an extra 200 million people would have escaped poverty. That could have risen to 700 million had poor people benefited more than the rich from economic growth,” it said.

In China, the richest 1% of households own one-third of the country’s wealth, while the bottom 25% account for only 1%, a new report by Peking University researchers showed.

In addition to the steadily rising wealth gap, the income gap between the richest and poorest is also quickly increasing. The poorest 20% of the world — who live below the extreme poverty line, living on less than $1.90 a day — barely saw their incomes budge between 1988 and 2011, while the most prosperous 10% enjoyed a 46% jump.

“The global economy is not working to pull these people out of extreme poverty,” said Deborah Hardoon, Oxfam’s deputy head of research.

An interesting report published last year by the Pew Research Center found that worldwide poverty had fallen by almost half over the past decade. This report does not represent the reality of the situation as 71% of the world’s population continues to live off $10 or less a day. The truth is that the wealth of the poorest 3.6 billion people plunged by 41%, yet as the 1% continues to increase its combined wealth, the remainder of the population begins to level off in comparison to the top of the chart. This appears to be lowering the percentage of extreme poverty as more find themselves thrust into the ever increasing “middle class,” despite their income remaining the same. The so-called middle class has nearly doubled over the last ten years, yet today, there is no longer a middle class; there is only the 1% and just about everyone else. 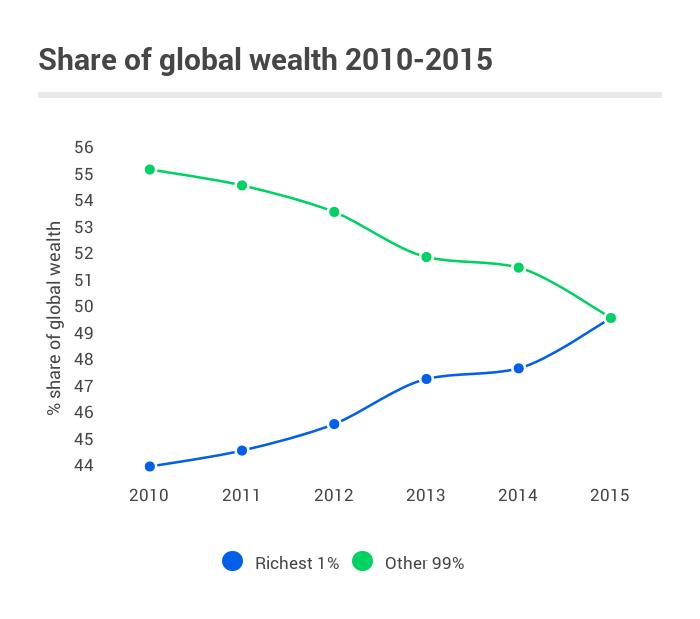 The Oxfam report showed a global network of tax havens that has allowed the richest individuals to hide an estimated $7.6 trillion. Oxfam is hoping to counter inequality by renewing its call for “world leaders to agree [on] a global approach to end the era of tax havens,” among a list of other advocations such as paying a living wage and woman’s economic equality; it is worth noting that 53 of the world’s richest 62 people are men.

The Equality Trust, which campaigns against inequality in the UK, said Britain’s 100 richest families had increased their wealth by at least £57bn since 2010, a period in which average incomes declined. Duncan Exley, the trust’s director, said:

“Inequality, both globally but also in the UK, is now at staggering levels. We know that such a vast gap between the richest and the rest of us is bad for our economy and society. We now need our politicians to wake up and address this dangerous concentration of wealth and power in the hands of so few.”

They’re not even trying to hide their bias any more. Despite efforts by the mainstream media to convince an ever disinterested public that they are still relevant and non-partisan, a last minute headline change by the Washington Post proves just how desperate they are to maintain their big government narrative. After running an immigration article Read More…

A judge has dismissed a lawsuit from the sixth man who has claimed he was sexually assaulted by Dennis Hastert when he was a young boy. (TFTP) A judge has chosen to protect former U.S. House speaker and admitted child rapist, Dennis Hastert, by throwing out a lawsuit filed by a man who claims he Read More…

The AP reported that the DHS – in a stunning reversal – told Wisconsin election officials that the Russian government did not scan any part of the state’s voting system, asserting that it was actually the state’s Dept. of Workforce Development that was scanned by “Russian IP addresses.” While it seemed as though the “Russiagate” Read More…