Sen. Rand Paul, the former Republican presidential candidate and vocal champion of civil liberties, has received allegations that the Obama administration sought intercepted intelligence from the National Security Agency on him and other members of Congress and has asked President Donald Trump to conduct a formal investigation, Circa has learned.

Paul quietly asked for the probe nearly a month ago in a letter to Trump that was obtained by Circa.

“An anonymous source recently alleged to me that my name, as well as the names of other Members of Congress, were unmasked, queried or both, in intelligence reports of intercepts during the prior administration,” Paul wrote Trump in a letter dated April 10.

“In light of the revelations that the names of persons associated with the Trump campaign were unmasked, I believe the allegations that myself and other elected members of the legislative branch may have also been unmasked or caught in intelligence gathering warrants investigation.“

The emergence of the letter, which also was copied to White House Chief of Staff Reince Priebus and senior Trump adviser Steve Bannon, comes after Circa recently reported that members of Congress and their staffs have been unmasked in NSA intelligence reports as frequently as once a month since President Obama loosened privacy protections back in 2011. 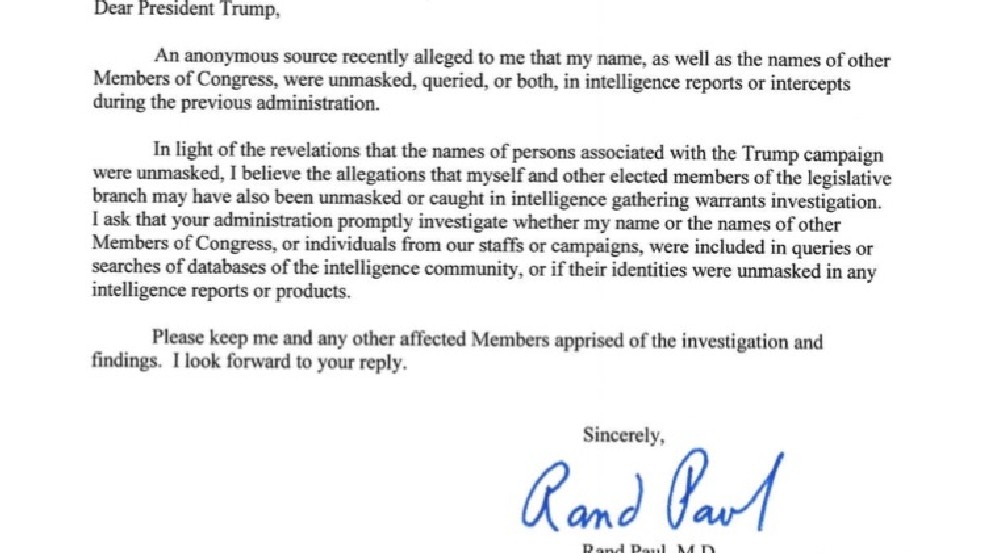 Did the Obama admin use warrantless “wiretapping” on other candidates besides @realDonaldTrump? https://t.co/h7rsjvNLHM

Paul’s letter offered no further detail on the source of the allegations of any specific incident or intercepts.

A source in the intelligence community told Circa on Friday that they were unaware of any unmasking of NSA intercepts that occurred in 2016 when Paul was running for president that would have required a notification to Congress. The source did not know about prior years.

Usually if the intelligence community reveals the identity of a lawmaker in an NSA intercept, Congress gets what is known as a Gates notification.

Paul has been a critic of the government use of NSA intercepts to spy on Americans and championed other civil liberty causes, most famously conducting a 13-hour filibuster in 2013 on the Senate floor to raise concerns that U.S. military could use drones to strike U.S. citizens on U.S. soil.

Authored by John Solomon via Circa.com

As we noted previously, given the FBI has already ‘cleared’ Flynn, the only possible path for escalation from here by the deep state, is to leak the actual recorded calls to the press, thus “proving” Flynn lied, assuming of course, he did. Furthermore, as Mike Krieger recently raged, the public should demand the Flynn transcripts Read More…

It may have arrived with little fanfare, but Russia’s SWIFT alternative has, more or less, arrived. Speaking in no uncertain terms at a meeting with Russian President Vladimir Putin late last month, Elvira Nabiullina, the Governor of Russia’s central bank, stated: “We have finished working on our own payment system, and if something happens, all Read More…

Turns out there really was foreign collusion in the 2016 US presidential election. UK spies colluded with Obama hold-overs in the US deep state to try and get Hillary elected. When that failed they invented “Russiagate” to try and overthrow the US election. Will President Trump wake up and see the danger that the US Read More…

One Reply to “Rand Paul: Obama Spied On Me Using NSA Intercepts”