An internet researcher has uncovered what appears to be proof that the FBI was investigating the Uranium One deal back in 2015 – months after the Peter Schweizer book Clinton Cash exposed the scheme, along with an article in the New York Times which laid out allegations of criminal malfeasance by the Clintons, their charitable foundation, and several associates.

Twitter user Katica (@GOPPollAnalyst) – who notably discovered Hillary Clinton’s IT guy ‘Stonetear’ asking Reddit users how to strip Clinton’s name from archived emails – discovered several Preservation and Records requests sent by an FBI special agent to various agencies involved in the approval of the Uranium One deal on August 28th, 2015, as first published by The Conservative Treehouse. Katica found the requests buried in an FBI file released via the Freedom of Information Act (FOIA). 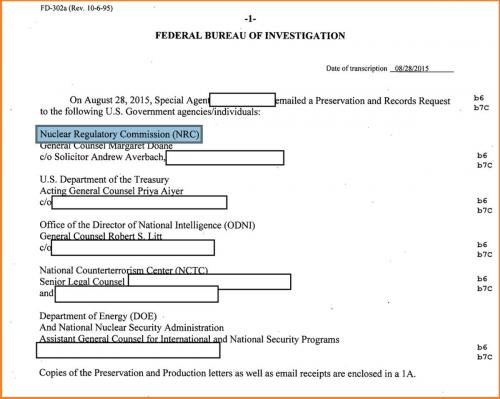 The agencies which received the request included the Nuclear Regulatory Commission, the U.S. Dept. of Treasury, the Office of Director of National Intelligence (ODNI James Clapper), The National Counter Terrorism Center, and the U.S. Department of Energy (DOE).

As The Conservative Treehouse notes:

It would be intellectually dishonest not to see the very likely attachment of the special agent’s action. That is to say an FBI probe originating as an outcome of information retrieved in parallel to the timing of the “criminal probe” of Secretary of State Hillary Clinton’s email use.

If you consider the larger Clinton timeline; along with the FBI special agent requests from identified participants; and overlay the Nuclear Regulatory Commission as the leading entity surrounding the probe elements; and the fact that the CFIUS participants were the recipients of the retention requests; well, it’s just too coincidental to think this is unrelated to the Uranium One deal and the more alarming implications.

Let’s not forget a bombshell report from The Hill two weeks ago which revealed that as early as 2009, the FBI – led by Robert Mueller at the time, had a mole in the Russian uranium industry, and that the agency had evidence that “Russian nuclear officials had routed millions of dollars to the U.S. designed to benefit former President Bill Clinton’s charitable foundation during the time Secretary of State Hillary Clinton served on a government body that provided a favorable decision to Moscow” – a deal which would grant the Kremlin control over 20 percent of America’s uranium supply.

So – while the FBI investigation into Hillary Clinton was sold as a simple matter of mishandling of classified material, we now have proof that the FBI set their sights on the Uranium One scandal weeks after they began looking into Hillary Clinton’s emails. We also know that five FBI field offices and the IRS have been investigating the Clinton Foundation on accusations of pay-to-play and other criminal acts.

Bets on who’s indicted next?

Pizzagate in Canada, People Get Arrested: The Pizza-Protecting “Authorities” of D.C. Need to See this Video

HighImpactFlix just released an excellent and poignant video highlighting a massive pedophile ring that was exposed in Canada. Project Spade uncovered an entire pedophile movie production and distribution company in Toronto operating online, and nearly 400 children have been rescued, and 348 adults have been arrested. Among the hundreds arrested, there were 40 school teachers, 9 doctors and Read More…

It can be troublesome to acknowledge the fact that popular mainstream media outlets, and perhaps in some cases, popular alternative media outlets, are subject to large amounts of infiltration by intelligence agencies, but it’s true. This isn’t a matter of conjecture. It’s happened before with the CIA’s “Operation Mockingbird, a CIA-based initiative to control mainstream media, Read More…

Over the past week, I’ve been watching the History Channel’s America’s War on Drugs mini docu-series. To my surprise, the History Channel was shockingly honest about the CIA’s involvement in the war on drugs and the massive political propaganda campaigns that went along with it. The series criminalized the CIA and the government, and rightly so, discussing their Read More…