War for the USA these days is a weird, inconclusive enterprise.

Our objectives are poorly discerned, hardly even articulated anymore, just a pattern of going through the motions as destructively as possible with no end in sight.

How many Americans can state what our mission in Afghanistan is after seventeen years of blundering around its bare mountains and valleys?

What exactly has been the point of our exercises in Syria?

To get rid of Bashar al-Assad, the wonks might say. Really? And replace him with what? With the ragtag ISIS maniacs we’ve been shoveling arms and money to?

What goes on in the Baghdad Green Zone these days with Operation Inherent Resolve still underway?

How come four US Special Forces soldiers were killed in Niger in 2017? Do you know what they were doing there?

How many Americans can even say where Niger is on a map? How much better is life in Somalia these days with American soldiers on-the-scene?

What was the net effect of our effort to liberate Libya in 2011 (Operation Freedom Falcon)?

What factions are US military advisors training in Ukraine?

Defense Secretary James Mattis says, “We’re working with them on reform of their military.” Hmmm…. So they can be more like us?

Did you happen to notice Sunday that many Major League Baseball teams were sporting military-themed camo caps? What’s up with that? Are we planning to send Aroldis Chapman to throw 105mph fastballs at Hezbollah? In fact, camo has been a popular theme in civilian fashion for years so that everyone from truck drivers to millionaire rap stars can affect to be mighty warriors. Did you know that since 2009 the National Football League has been under contract with the US military to stage on-field patriotic tributes and warplane flyovers — and how much do these displays cost (taxpayer alert)? 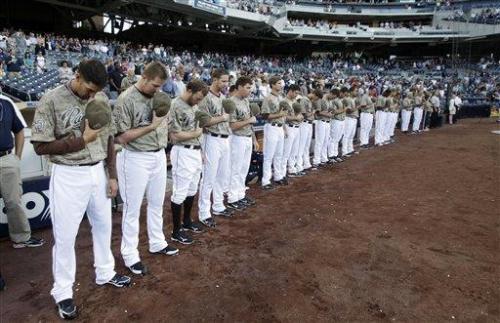 I suppose that military prowess is all we’ve got left in the national pride bag in these times of foundering empire.

Few are fooled these days by the “land of opportunity” trope when so many young people are lucky to get a part-time gig on the WalMart loading dock along with three nights a week of slinging Seaside Shrimp Trios for the local Red Lobster. Of course, there are a few choice perches in venture capital out in Silicon Valley, or concocting collateralized loan obligations in the aeries of Wall Street – but nobody is playing Aaron Copeland’s Fanfare for the Common Man to celebrate these endeavors.

There’s a macabre equivalency between our various overseas war operations and the school shootings that are now a routine feature of American daily life. The purposes are equally obscure and the damage is just as impressive – many lives ruined for no good reason. But consider more lives are lost every year in highway crashes than in the Mexican War of the 1840s and more Americans are dying each year lately of opioid overdoses than the entire death toll of the Vietnam War. America’s soul is at war with its vaunted way-of-life.

It’s hard to be empire, for sure, but it’s even harder, apparently, to be a truly virtuous society. First, I suppose, you have to be not insane. It’s hard to think of one facet of American life that’s not insane now. Our politics are insane. Our ideologies are insane. The universities are insane. Medicine is insane. Show biz is insane. Sexual relations are insane. The arts are insane. The news media is utterly insane. And what passes for business enterprise in the USA these days is something beyond insane, like unto the swarms of serpents and bats issuing from some mouth of hell in the medieval triptychs. How do you memorialize that?

The Geopolitics Of Human Gene Editing

A cursory warning was left by renowned physics professor Stephen Hawking regarding a future where a race of superhumans, manipulating their DNA, would take control of their own evolution. The warning came just before his death in March of this year. The Washington Post in its article, “Stephen Hawking feared race of ‘superhumans’ able to manipulate Read More…

There are more than five, but here are five glaring neon signs that we’re probably going to war with Iran, courtesy of the Bush, Obama, and now the Trump administration. Source: www.thedailysheeple.com

The US led war in Yemen has been ongoing almost as long as the one in Afghanistan – because both Republicans and Democrats oppose resolution in all US war theaters. On November 14 House Republicans blocked a resolution to end war in Yemen by ending US military support for Saudi Arabia and the UAE. Yemen Read More…