Five months of text messages between anti-Trump FBI agents Peter Strzok and Lisa Page have been lost, according to a Friday disclosure from the Justice Department to the Senate Homeland Security and Governmental Affairs Committee (HSGAC), as reported by the Associated Press and the Daily Caller.

In a letter from Stephen Boyd, the assistant attorney general for legislative affairs at the Justice Department, to Wisconsin Sen. Ron Johnson, the chairman of HSGAC, the assistant AG writes that “The Department wants to bring to your attention that the FBI’s technical system for retaining text messages sent and received on FBI mobile devices failed to preserve text messages for Mr. Strzok and Ms. Page.”

The explanation for the gap was “misconfiguration issues related to rollouts, provisioning, and software upgrades that conflicted with the FBI’s collection capabilities.”

The missing texts conveniently span the period between Dec. 14, 2016 and May 17, 2017 – the day Robert Mueller was appointed to take over the FBI’s probe of alleged Trump-Russia collusion, and during the period in which the FBI would ostensibly have been hard at work on their “insurance policy” against a Trump victory, alluded to in previous text messages between Strzok and Page.

“I want to believe the path you threw out for consideration in Andy’s office – that there’s no way he [Trump] gets elected – but I’m afraid we can’t take that risk,” wrote FBI counterintelligence officer Peter Strzok to FBI lawyer Lisa Page – with whom he was having an extramarital affair while spearheading both the Clinton email inquiry and the early Trump-Russia probe – adding “It’s like a life insurance policy in the unlikely event you die before you’re 40.”

Despite the five months of missing text messages between Strzok and Page, the DOJ turned over a new 384 page trove of new text messages to the HSGAC, according to a letter from Chairman Ron Johnson (R-WI) to FBI Director Christopher Wray (letter below).

The new batch of texts are from the spring and summer of 2016 and involve discussions revolving around the Hillary Clinton email investigation – and in particular, former Attorney General Loretta Lynch’s decision to accept the FBI’s recommendation not to press criminal charges against then-candidate Clinton.

One exchange references a change in language to Comey’s statement closing out the email case involving Clinton. While an earlier draft of the statement said Clinton and President Barack Obama had an email exchange while Clinton was “on the territory” of a hostile adversary, the reference to Obama was at first changed to “senior government official” and then omitted entirely in the final version.

The exchange in question from Johnson’s letter is below: 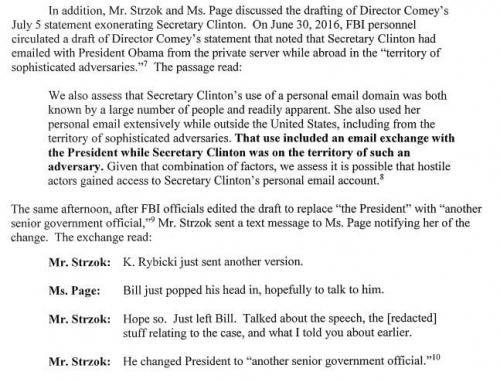 In another exchange, the two express displeasure about the timing of Lynch’s announcement that she would defer to the FBI’s judgment on the Clinton investigation. That announcement came days after it was revealed that the attorney general and former President Bill Clinton had an impromptu meeting aboard her plane in Phoenix, though both sides said the email investigation was never discussed. 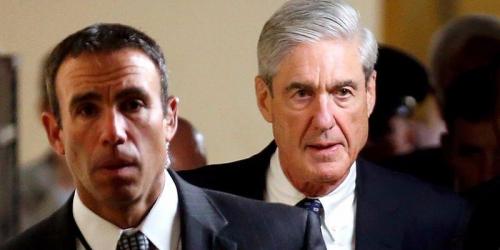 In a July 1 text message, Strzok tells Page that the timing of Lynch’s statement “looks like hell,” while Page mockingly refers to Lynch’s decision to accept the FBI’s conclusion a “real profile in courag(e) since she knows no charges will be brought.”

This is also the exchange which troublingly demonstrates that then-Attorney General Loretta Lynch was aware that Comey would not recommend criminal charges in the Clinton investigation prior to Lynch’s announcement that she would accept whatever recommendation the FBI made. 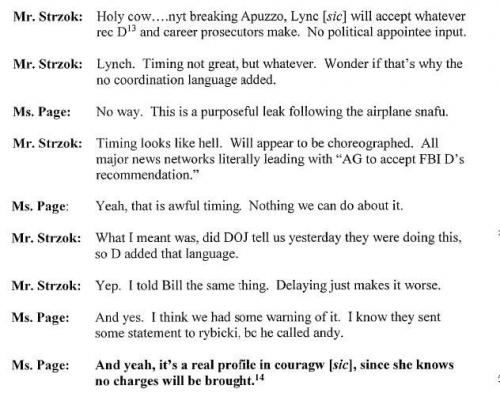 Four days later (and six days after the “tarmac” meeting), Comey announced the FBI’s recommendation not to press charges against Clinton.

Strzok and Page also texted each other with concerns over which email accounts they were using for work purposes, with Page texting Strzok on November 10, 2016 “Hey without thinking I replied to the email you sent me on Gmail. But it went to your Verizon. So please clear. Let me know if you want me to send it again somewhere else.” On October 4, 2015, Strzok texts Page “It’s going to be ok at work. And haven’t emailed you here, although I just did on gmail.”

Word of the missing texts between Strzok and Page come on the heels of a report we covered yesterday in which the NSA “sincerely regrets” deleting all Bush-era surveillance data it was ordered to preserve. 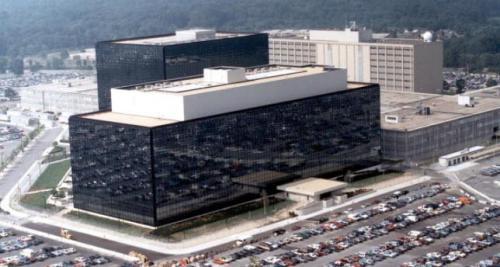 The NSA told U.S. District Court Judge Jeffrey White in a filing on Thursday night and another little-noticed submission last year that the agency did not preserve the content of internet communications intercepted between 2001 and 2007 under the program Bush ordered. To make matters worse, backup tapes that might have mitigated the failure were erased in 2009, 2011 and 2016, the NSA said.

“The NSA sincerely regrets its failure to prevent the deletion of this data,” NSA’s deputy director of capabilities, identified publicly as “Elizabeth B.,” wrote in a declaration filed in October.

“NSA senior management is fully aware of this failure, and the Agency is committed to taking swift action to respond to the loss of this data.”

Given the magnitude of malfeasance already uncovered within the top ranks of the FBI during and after the 2016 presidential race, we can only imagine what’s contained within those five months of missing texts between the rabidly anti-Trump FBI employees deeply involved in both the Clinton and Trump investigations.

And here is Rep. Jim Jordan.

First the IRS destroyed emails pivotal to our investigation of their political targeting.

The time for a second special counsel is now.https://t.co/BonrBlsJsB

Revealed: The Orwellian Tools Used By Law Enforcement To Spy On Activists Via Social Media

Last week, the California ACLU released an alarming report about California law enforcement agencies’ covert use of social media surveillance software. The report compiles records requested of 63 police departments, sheriffs, and district attorneys across the state. The ACLU found over 40% are using the software without any transparency or public disclosure. They also reported law Read More…

In this era of political polarization, when Americans seem to agree on absolutely nothing, let me reassure you. We overwhelmingly agree that cannabis should be legal. 1 in 5 Americans have (state) legal access, 1 in 2 have experimented with it, and more than 1 in 10 smoke regularly. Southern California yuppies are publicly winning prizes for growing the same plant that landed Georgia Read More…

A few days ago we noted that CNN was forced to retract one of their bombshell ‘Russian collusion’ stories when it was apparently revealed that the whole thing was nothing more than their latest, anonymously sourced fake news debacle. Like most CNN stories on the topic, this one carried a salacious title (“Congress was investigating Read More…