“He doesn’t have a gun, he has a [traumatic brain injury], he’s not going to do anything to you guys, he just took his medicine,” Scott’s wife tells police in moments before shooting.

The video was taken by Scott’s wife, Rakeyia Scott, who can be heard pleading with police not to shoot her husband. She repeatedly tells the officers that Scott has a traumatic brain injury and that he is unarmed, growing increasingly distraught, before multiple shots ring out.

“He doesn’t have a gun, he has a [traumatic brain injury], he’s not going to do anything to you guys, he just took his medicine,” Scott’s wife pleads.

Watch the video (which is graphic and may be disturbing) here:

In the two-minute, 12-second footage obtained by NBC News, Rakeyia Scott can be heard saying, “Don’t shoot him, don’t shoot him” as police appear to converge on a white pick-up truck in the parking lot of a condominium complex. “He has no weapon—don’t shoot him!”

At this point, it is “unclear whether she is telling him not to get out of the vehicle he’s in,” as the Huffington Post writes.

After the shots, Scott’s wife screams, “Did you shoot him?’

The video does not show the shooting, but it does offer a clear view of the ground around Scott’s body 20 seconds after he was shot.

Those images of the pavement, clear of any objects near the victim’s feet, are significant because they do not show a gun on the ground in the spot where police later claimed one was found. 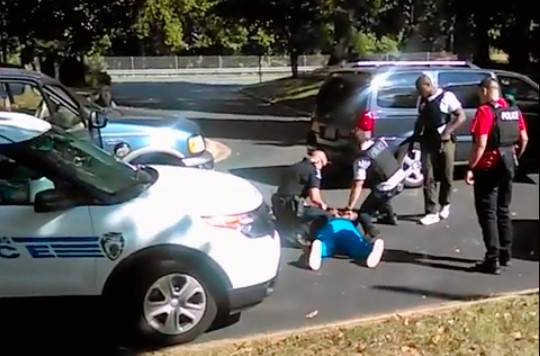 On Wednesday police sources told a local NBC News affiliate, WCNC, that an image taken by another witness a short time later, after police tape was stretched across the area, showed Scott’s gun on the pavement near his feet.

A video by dahboo77 shows some different angles on the scene:

When diving into the recent multi-terabyte leak that is sweeping the globe in a media frenzy, what has been dubbed the “Panama Papers,” it takes a very brief amount of research to find a wide variety of discrepancies and various information “loose ends” within the papers.  To dive right into this, the first major red Read More…

“In Latin America, Africa and Asia 40% of people don’t have access to formal housing. In Bogota alone 750 tonnes of plastic is sent to landfill every day. It can take up to 500 years for plastic to biodegrade and 75% of plastic produced globally is either sent to landfill or not formally disposed of Read More…

Exercise In Futility: MI5 To Investigate Itself Over Manchester “Missed Warnings”

“We have completed our investigation of ourselves and found that we have done nothing wrong.” The Guardian reports: MI5 has launched two urgent inquiries into how it missed the danger posed by the Manchester bomber, Salman Abedi, amid claims his interest in being a potential terrorist killer was repeatedly reported to the authorities. Britain’s domestic Read More…