“I had to stop every couple pages and…try to rearrange my understanding of history. It challenges you to rethink everything.” – Congressman Thomas Massie describing his experience reading the 28 pages in March 2014.

“The 28 Pages” – part of an 838-page Joint Inquiry into Intelligence Community Activities Before and After the Terrorist Attacks of September 11, 2001 – have been kept almost entirely classified since 2002.

Former Sen. Bob Graham, a co-chairman of the investigation committee and strong advocate of declassifying the information, said,

“The 28 pages primarily relate to who financed 9/11 and they point a very strong finger at Saudi Arabia as being the principal financier.”

Today the 28 pages were finally released, although many parts are redacted so as to hide specific information. Still, they show that Graham was right—several figures within the Saudi Arabian government provided assistance to the 9-11 hijackers through proxies within the U.S.

“There is information, primarily from FBI sources, that at least two of those individuals were alleged by some to be Saudi intelligence officers,” reads the first of 28 pages. “The Joint Inquiry’s review confirmed that the Intelligence Community also has information, much of which has yet to be independently verified, indicating that individuals associated with the Saudi Government in the United States may have other ties to al-Qa’ida and other terrorist groups.” 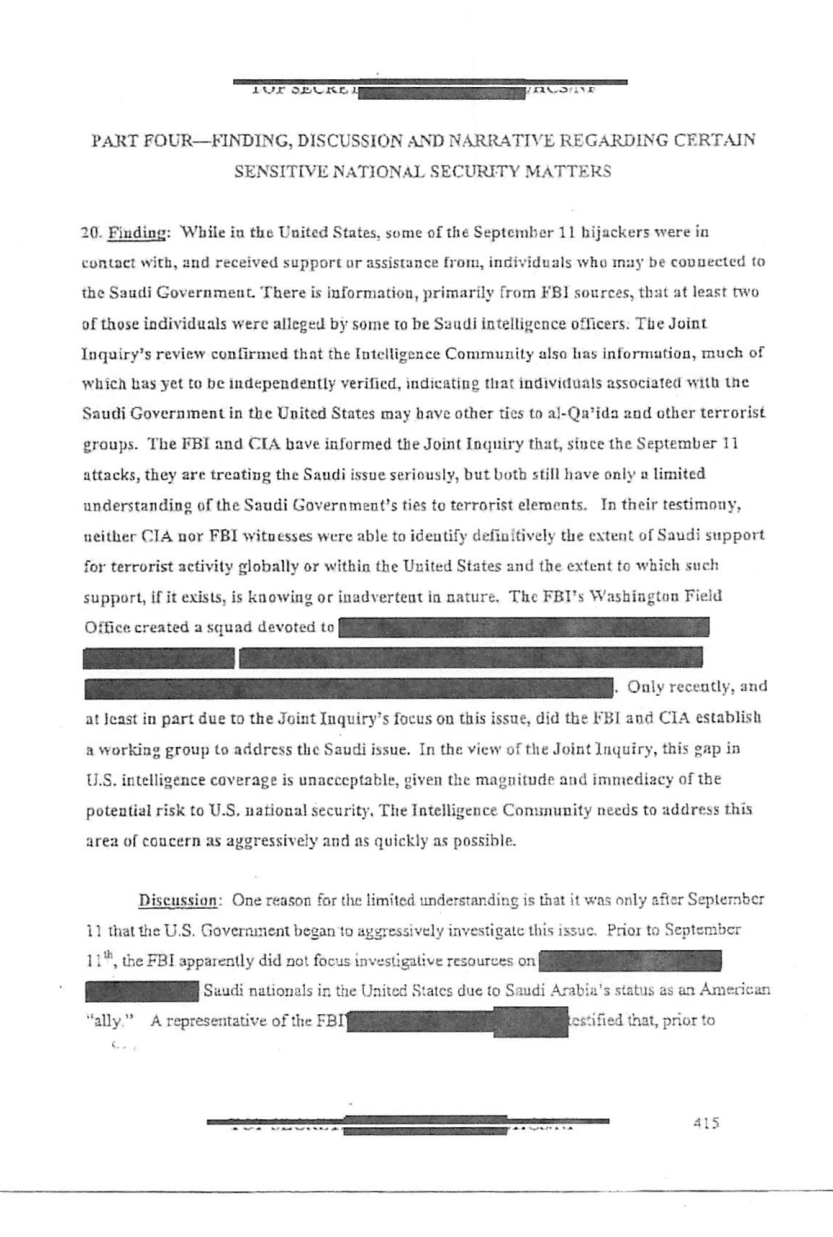 There is “solid evidence” that Omar al-Bayoumi and Osama Basnan—both known as Saudi agents to the FBI before 9-11—provided considerable assistance to two of the hijackers, Nawaf al-Hazmi and Khalid al-Mihdar. Some of this assistance included co-signing apartment leases and helping the would-be hijackers find flight schools.

After 9-11, “the FBI discovered that al-Bayoumi had far more extensive ties to the Saudi government than previously realized.” These are detailed in the declassified 28 pages.

The report also details numerous payments from Saudi government figures, including Prince Bandar, to Basnan and his wife before to 9-11. The CIA stated that he may have received a fake passport from the Saudi government. Basnan claimed that he “did more for the hijackers than al-Bayoumi did.” 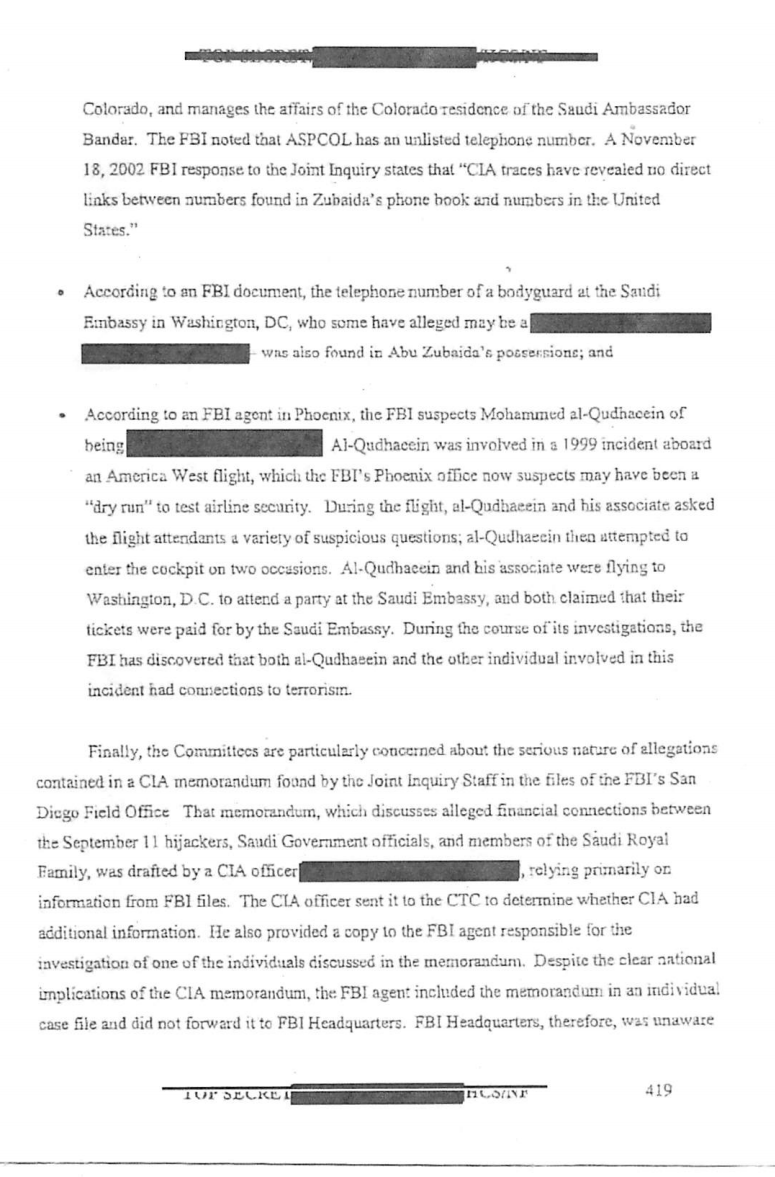 Also revealed in the declassified pages is the fact that the notorious Abu Zubaida—a Saudi Arabian national currently being held in Gitmo—had telephone numbers linking him to Saudi ambassador Prince Bandar.

A Saudi Interior Ministry employee stayed at a Virginia hotel with a 9-11 hijacker just before the attacks, but he told the FBI he didn’t’ know them. Agents felt he was being deceptive. The Saudi then faked a seizure and departed the U.S. before further questioning.

Saudi Naval Officers were also in contact with the 9-11 hijackers, and the report details other Saudi government officials and terrorist operatives.

How is it that these various connections between Saudi government figures and suspected terrorists were not acted upon by intelligence agencies?

“Finally, the Committees are particularly concerned about the serious nature of allegations contained in a CIA memorandum found by the Joint Inquiry Staff in the files of the FBI’s San Diego Field Office. That memorandum, which discusses alleged financial connections between the September 11 hijackers, Saudi Government officials, and members of the Saudi Royal Family, was drafted by a CIA officer [redacted], relying primarily on information from FBI files. The CIA officer sent it to the CTC to determine whether CIA had additional information. He also provided a copy to the FBI agent responsible for the investigation of one of the individuals discussed in the memorandum. Despite the clear national implications of the CIA memorandum, the FBI agent included the memorandum in an individual case file and did not forward it to FBI Headquarters. FBI Headquarters, therefore, was unaware of statements in the memorandum until the joint Inquiry brought the memorandum’s implications to the Bureau’s attention.” 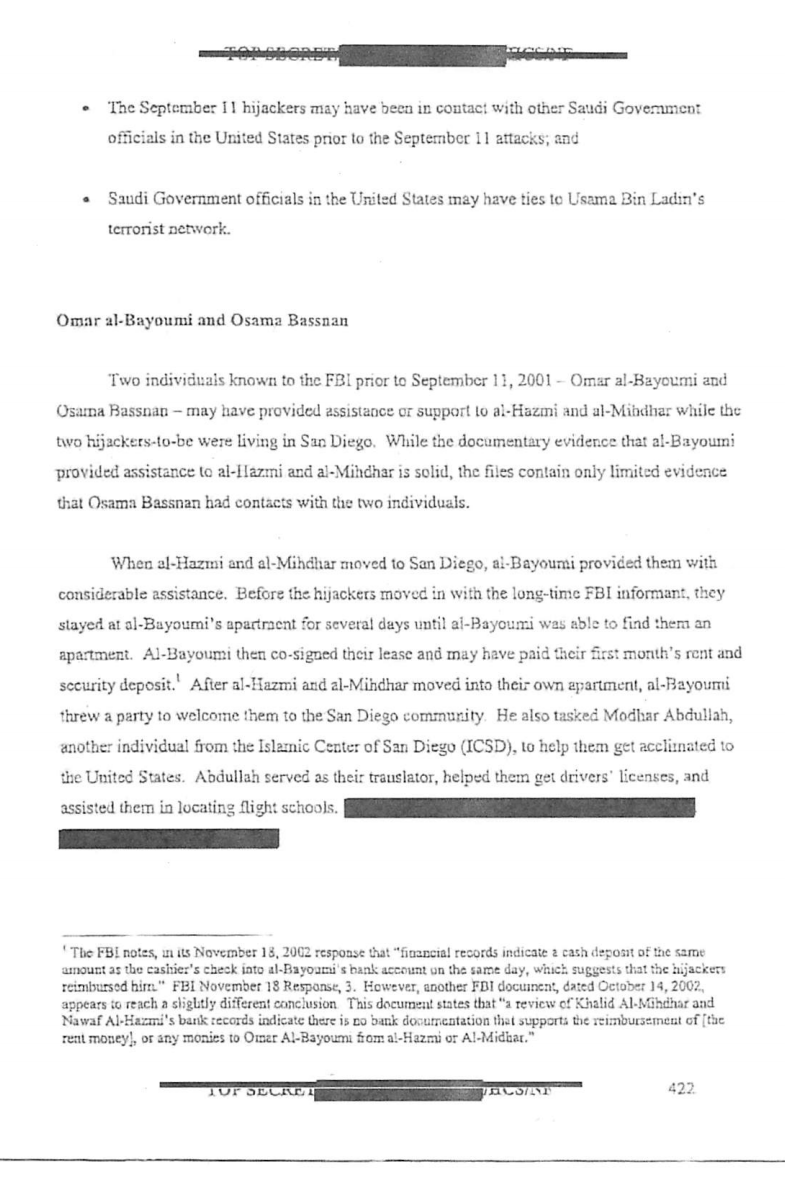 As we approach the 15th anniversary of the 9-11 attacks, it is clear that Congressman Massie was right that the 28 pages will indeed challenge us to rethink everything. According to the report, the FBI never pursued connections between terrorism and Saudi Arabia because of that country’s status as “ally.”

Indeed, the Wahhabist dictatorship has had a special relationship ever since U.S. Treasury Secretary signed a secret pact 41 years ago to keep dealings between the countries “strictly secret.” This is how Saudi Arabia can now hold the U.S. economy hostage by threatening to crash the dollar if Congress passes a bill.

As Ben Swann says, “Wouldn’t that be called terrorism?”

The fact is, Saudi Arabia has a long history as one of the biggest promoters of terrorism in the region. The monarchy follows a hardline fundamentalist branch of Sunni Islam known as Wahhabism, which fuels extremist views among its adherents and has major influence over the rise of ISIS.

The 28 pages make it clear that at least several important figures in the Saudi Arabian government were instrumental in helping to carry out 9-11. Whether it was a top-down effort or something fomented by parts within the government may never be fully known.

There are other remaining questions, such as what appears to be a controlled demolition of Building 7, which housed a large cache of CIA documents. And how is it that so many Saudi nationals were allowed to flee the country just after 9-11, when everyone else was on lockdown?

In an interview with 60 Minutes in April, Bob Graham said,

Justin Gardner
Justin Gardner is a peaceful free-thinker with a background in the biological sciences. He is interested in bringing rationality back into the national discourse, and independent journalism as a challenge to the status quo. Gardner finds inspiration in the garden and people who promote peace and goodwill to all life. Justin is a writer at The Free Thought Project.
http://thefreethoughtproject.com/author/justin-garnder/

Welcome to The Daily Wrap Up, a concise show dedicated to bringing you the most relevant independent news, as we see it, from the last 24 hours (11/08/18). As history has made painfully clear, the US remains on the same course regardless of who they tell us was “voted” into that white house. The same Read More…

There’s no doubt about it: three letter agencies like the NSA, FBI and CIA and the ones we don’t yet know about have some great people who want nothing but the best for their fellow human beings. People join these agencies because they have good hearts, and want to see the world thrive in a Read More…

Eagles of Death Metal lead singer, Jessie Hughes, made a stunning statement in an interview with Fox Business Network: He believes it’s possible security guards at the Bataclan Theater knew about the Paris terror attacks in advance. As a veteran performer, Hughes realized something was odd the night leading up to the attack, when the security Read More…