Not long ago, Hillary Clinton was outed for hypocrisy and corruption when 3,000 emails were released from her private email server in late December of 2015. The emails detailed how a violent intervention was not really necessary in Libya, and that the invasion was less about protecting the people from a dictator than it was about money, banking, oil, and preventing African economic sovereignty. You can read more about that here.

Now Clinton has come under fire again, this time for emails she sent while serving as Secretary of State. If you haven’t already heard (no mainstream media outlets seem to be acknowledging this), WikiLeaks released a searchable archive of 30,322 emails pulled from a private account she was using during this time. The messages have been made easily available and in a searchable format.

Here’s what the Anti-Media had to say about the release:

The scary, albeit fascinating exposé on who’s in bed with whom in the halls of global power has expanded to include Facebook, according to WikiLeaks. The organization has accused the social networking site of censorship, saying Facebook is blocking users’ access to the latest Clinton dispatch. 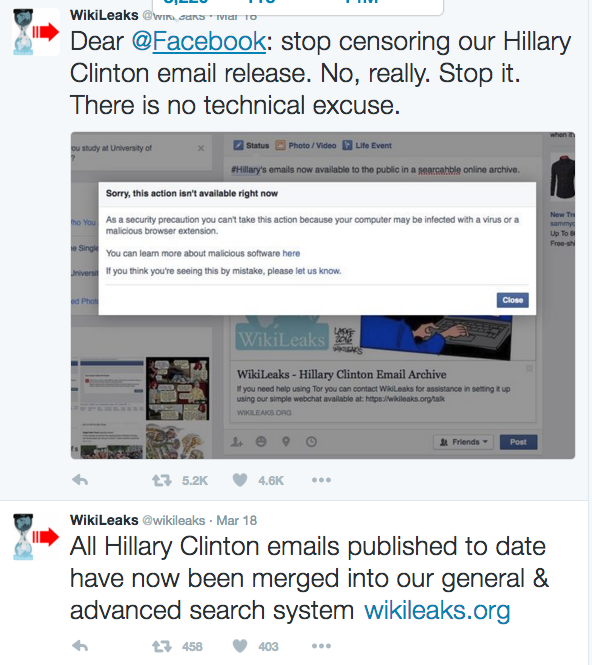 The Problem With Politics That Nobody Ever Talks About

Countless politicians and presidents have told the world, over and over again, that a ‘hidden hand’ or ‘invisible’ government is really in charge, and that this ‘shadow’ government is free from the law itself, doing whatever it wants while amassing enormous amounts of power and perpetuating the military industrial complex. This unidentified conglomerate controls the entire political process — not heads of state — which is probably why President Roosevelt told us that presidents are “selected, not elected.”

Below is a statement from Senator William Jenner, given to Congress in 1954:

Today the path to total dictatorship in the U.S. can be laid by strictly legal means, unseen and unheard by Congress, the President, or the people. . . . We have a well-organized political-action group in this country, determined to destroy our Constitution and establish a one-party state. It operates secretly, silently, continuously to transform our Government . . . [and] this ruthless power-seeking élite is a disease of our century. This group is answerable neither to the President, the Congress, nor the courts. It is practically irremovable. (source)

Bernie Sanders recently made this point as well, revealing to the American people, in no uncertain terms, how little power presidents truly have:

Unfortunately, the common theory that Democrats and Republicans are merely two wings of the same bird, sharing the same flight path, seems to be holding true. If there is one major problem with this entire political process, it’s that it gives us the illusion of democracy. Think about it: Does voting really make any difference whatsoever? With the entire American political system lying in the hands of a small group of people and the corporations they run, all held together by the big banks, what good does electing a president who has absolutely no power do?

Even if they do have influence, most are bought and paid for by their sponsors, and many engage in activities that are concealed from public knowledge; these Hillary emails are a great example of that. We live in a world of secrecy, one in which transparency efforts like those of Julian Assange and Edward Snowden are condemned. What kind of a democracy is this? The fact is that truth threatens the entire system of control, it threatens the interests of the global élite, and it threatens their ability to keep us quiet.

Politics has become a world of secrecy, one in which few citizens have any real idea of what is actually transpiring. An increased need for national security has provided the justification for such secrets, and as President Kennedy warned us, this constant, heightened need for security has been seized upon by those who continue to abuse the power it affords them. Dwight Eisenhower also warned us about the massive potential for misplaced power within the military industrial complex.

Again, politicians may be able to influence certain pieces of legislature here and there, but ultimately, corporations hold so much power over governmental policy that major legislature is rarely passed through an actually democratic process. Even if it does, it generally favors the big corporations. The Trans Pacific Partnership (TTP) is a great example of this. Every single year we experience the same thing — we hear the same promises, we are pounded with false hope, and we then put our desire for change in the hands of others. Electing a president these days is usually a pretty empty gesture.

“Behind the ostensible government sits enthroned an invisible government owing no allegiance and acknowledging no responsibility to the people.” (source) – President Roosevelt

The Internet is a military creation that has now become an essential part of communication in the modern world. Melissa Dykes explains the impact this is having on our relationships, our minds, and how we receive information. But it’s also a two-way street where we give information that is used for surveillance, targeted advertising, and Read More…

Turkish President Recep Erdogan has deployed 7,000 armed police and heavy vehicles to the Incirlik Air Base in Turkey. The base is a NATO asset and reportedly houses between 50 and 90 B-61 variable yield thermonuclear weapons. The base is the largest nuclear weapons storage site in Europe with some 25 underground vaults. (B-61 thermonuclear Read More…

Woman Prevents Cops From Entering Home With No Warrant, So They Break Her Leg

Instead of obtaining a warrant cops forced their way into a woman’s home causing her severe injury and putting the taxpayers on the line for millions. Santa Clara, CA — (TFTP) The taxpayers of Santa Clara will be shelling out a massive $6.7 million to settle a federal civil-rights lawsuit that was entirely preventable had Read More…