After spearheading an unctuous plan to discredit alternative media and reporting not in lockstep with the liberal establishment paradigm, the Washington Post — whose hypocrisy on the matter doomed the campaign from jump street — sanctimoniously declared,

“Let’s get out the hook and pull that baby off stage. Yes: Simply stop using it.

“Instead, call a lie a lie. Call a hoax a hoax. Call a conspiracy theory by its rightful name. After all, ‘fake news’ is an imprecise expression to begin with.”

Imprecise is a criminal mischaracterization of the chaos and confusion wrought when the Post threw journalism into a fan late last year.

Of course, that had been journalistic standard operating procedure for time immemorial — until WaPo blazed the precipitous trail into anti-Russia, Fake News propaganda following Hillary Clinton’s crushing electoral defeat — a result catching off guard only corporate outlets who predicted the opposite. 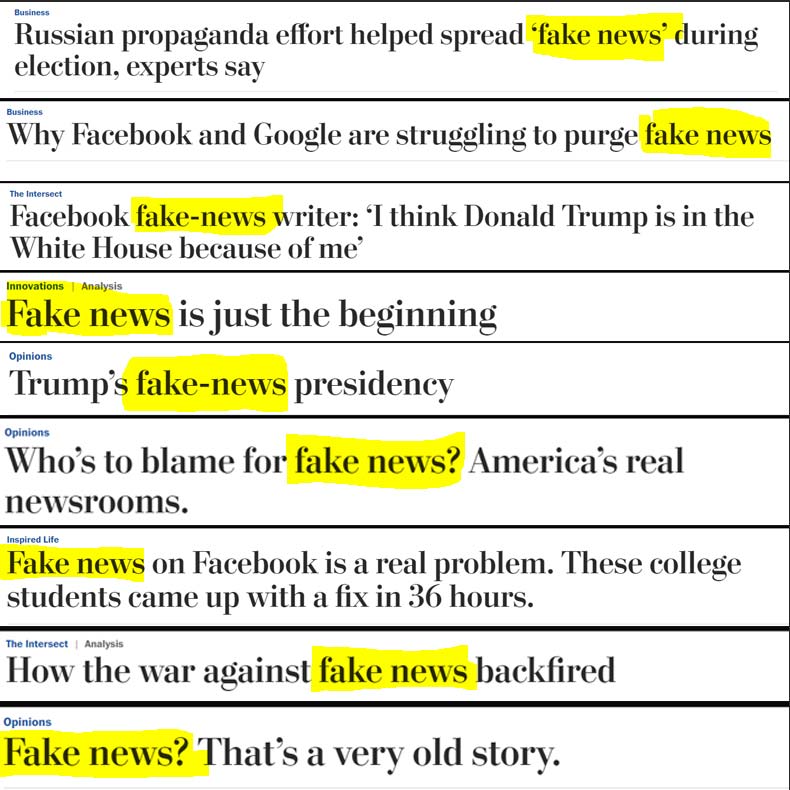 Had mainstream behemoths like the Washington Post and New York Times bothered consistently covering the stupefying corruption infesting the Democrat establishment — as revealed in the contents of documents published by WikiLeaks — it’s debatable whether Donald Trump would have won.

Tone-deaf all Hillary, all the time corporate media coverage during this election cycle led swaths of the nation to turn to alternative sources for responsible journalism — whether for fair reporting on emails proving the Dems sought to undermine Bernie Sanders, to get a conservative viewpoint on Trump, or simply for factual reports on WikiLeaks publications.

As bewilderment lingered over Clinton’s embarrassing loss, mainstream presstitutes hastened to point fingers at everyone but themselves — and hardest targeted were those outlets who’d failed to blindly lionize the former secretary of state.

Citing the suspiciously nascent organization PropOrNot as one source and known Russophobe Foreign Policy Research Institute as another, the once-illustrious Post — inexplicably eschewing every semblance of journalistic due diligence — refused to name individual researchers or offer even the frailest of explanations of methodology in asserting:

“The flood of ‘fake news’ this election season got support from a sophisticated Russian propaganda campaign that created and spread misleading articles online with the goal of punishing Democrat Hillary Clinton, helping Republican Donald Trump and undermining faith in American democracy, say independent researchers who tracked the operation.”

PropOrNot, the Post claimed, a “nonpartisan collection of researchers with foreign policy, military and technology backgrounds,” identified “more than 200 websites as routine peddlers of Russian propaganda during the election season.”

“Yes, the WashPost is saying: some people who we won’t identify, using methodologies we won’t describe, created This Important Blacklist!”

Yes, the WashPost is saying: some people who we won’t identify, using methodologies we won’t describe, created This Important Blacklist! https://t.co/4D9o5H7eEj

“The CIA has concluded in a secret assessment that Russia intervened in the 2016 election to help Donald Trump win the presidency, rather than just to undermine confidence in the U.S. electoral system, according to officials briefed on the matter,” the publication contended — failing to name these ‘officials’ or include a shred of proof their allegations could tread water.

It now appears likely these alleged officials cited by the Post were referencing the only recently published — and equally evidence-barren — putative intelligence community report accusing Russia and President Vladimir Putin, himself, of orchestrating an election meddling campaign.

But, in advance of the public debut of the dubious report as a whole, the FBI and Department of Homeland Security coughed up a disclaimer-emblazoned dispatch under questionable pretenses it offered proof the Russians hacked the Democratic National Committee and Clinton campaign chair John Podesta’s emails to fork over information to WikiLeaks.

Speaking more to tech security firms seeking ways to protect systems from hacking, however, the brief’s imprudent information panicked the unsavvy — and provided yet further kindling for WaPo’s Chicken Little-ism.

“Russian hackers penetrated U.S. electricity grid through a utility in Vermont, officials say,” read the original, altogether alarming, and utterly untrue headline. An order of magnitude more dangerous than wantonly calling out the Russians, had there been an actual hack of the U.S. electrical grid, the Obama administration would have grounds to justify military force against Russia.

But it didn’t happen. At all. No one — Russian or otherwise — hacked Vermont or put Americans in peril.

State officials later said a laptop inside the utility might have been penetrated — but the device wasn’t even connected to the grid. As typical for the Washington Post’s clickbait Fake News, however, the damage had been done.

Because the original now bears only a truncated editor’s note and a delicately retouched headline, stating, “Russian operation hacked a Vermont utility, showing risk to U.S. electrical grid security, officials say” — and, additionally, WaPo buried the full retraction article at the bottom of the front page — millions of readers have been scammed into fearing a non-existent threat.

Corporate media have been the most vocal purveyors of Fake News in all of journalism — and the Washington Post would have done well to consider no entity is ever too big to fail. Indeed, the larger and more imperious the entity, the more likely the downfall will be a spectacle to behold.

WaPo and its ilk outgrew their journalistic expediency when they began the bombastic war against Fake News — while pushing out Fake News as fast as their reporters could misconstrue fact, or fabricate threats based on lies.

And that’s precisely where the Post royally failed — when the outlet began hurling Fake News stones at legitimate independent media organizations under the assumption its own towering glass house of horrendously fraudulent reporting could survive the storm.

Notably, Sullivan’s attempt to rein in the Fake News Russian bear intimates the Post has no intention of following its own advice — her “modest proposal” targets the curiously-termed “truth-based community” — evincing a preemptive bid to ostracize outlets continuing to accurately employ the term against the corporate press.

In short, WaPo doesn’t want to be called on its falsehoods anymore, because — in light of its recent track record — Fake News is both a booming business, as well as an unwinnable war. When reputation hangs in the balance, withdrawing and re-describing your most effective weapon is akin to a Hail Mary — a last-ditch shot at wiping the pie from your face before it crusts over.

This war on Fake News, war on information, war on independent media, war on speech — all of this — is a war on dissent. WaPo’s Red Scaremongering and vacuous propaganda don’t pass the litmus test — neither does its feeble effort to shut Pandora’s Box.

Suicide, birth defects, heart problems, hostility, violence, aggression, hallucinations, self-harm, delusional thinking, homicidal ideation, and death are just a few of the side effects caused by psychiatric medication. There have been 150 studies in seventeen countries on antidepressant-induced side effects. There have been 134 drug regulatory agency warnings from eleven countries and the EU warning about the dangerous side Read More…

As the opioid crisis continues, pharmaceutical companies continue to pay politicians to look the other way, and the federal government fails to push for legitimate solutions. (TFTP) More than 200,000 Americans have died from prescription opioid overdoses since 1999 and as the epidemic continues, it raises serious questions about why the United States government has Read More…