The United States government is preparing to implement an additional level of sanctions against Iran for its refusal to meet a dozen demands that are so absurdly unreasonable that they have been called a regime change policy in all but name. The sanctions which have already been implemented have already badly hurt the Iranian economy, the sting of which is being felt first and foremost by Iran’s poor and sickly.

In an article titled “Iran’s poor to bear brunt of Trump’s oil sanctions”, Financial Times documents how poor Iranians are already strained to the breaking point from the cutbacks they’ve had to make in food and groceries. An article titled “In Iran, US sanctions are being felt, with harsher measures to come” by the Christian Science Monitor details difficulties Iranian charities are having getting medicine to sick children, including chemotherapy treatment, having already run out of four life-saving drugs. In an article titled “US fails to shield humanitarian trade with Iran as sanctions loom”, Al Monitor details the way humanitarian aid, while ostensibly exempt from the sanctions, has been severely impacted by their economic aspect because humanitarian aid costs money. The Wall Street Journal further explains the effects of America’s economic warfare on ordinary Iranian civilians in an article titled “Iran Moves to Shelter Millions as U.S. Sanctions Bite”.

This is before the US implements a new level of attacks upon Iran’s oil industry, a primary economic lifeline, which is scheduled to begin on November fifth. If Iran can’t find a way to get around these crushing sanctions in a significant way, many civilians already stretched far too thin will be pushed past the breaking point.

And who is the US government blaming for the consequences of its economic warfare? Why, the Iranian government, of course.

The International Monetary Fund @IMFNews is projecting a 3.6% decline in #Iran’s economy next year. That’s what happens when the ruling regime steals from its people and invests in Assad—instead of creating jobs for Iranians, they ruin the economy. 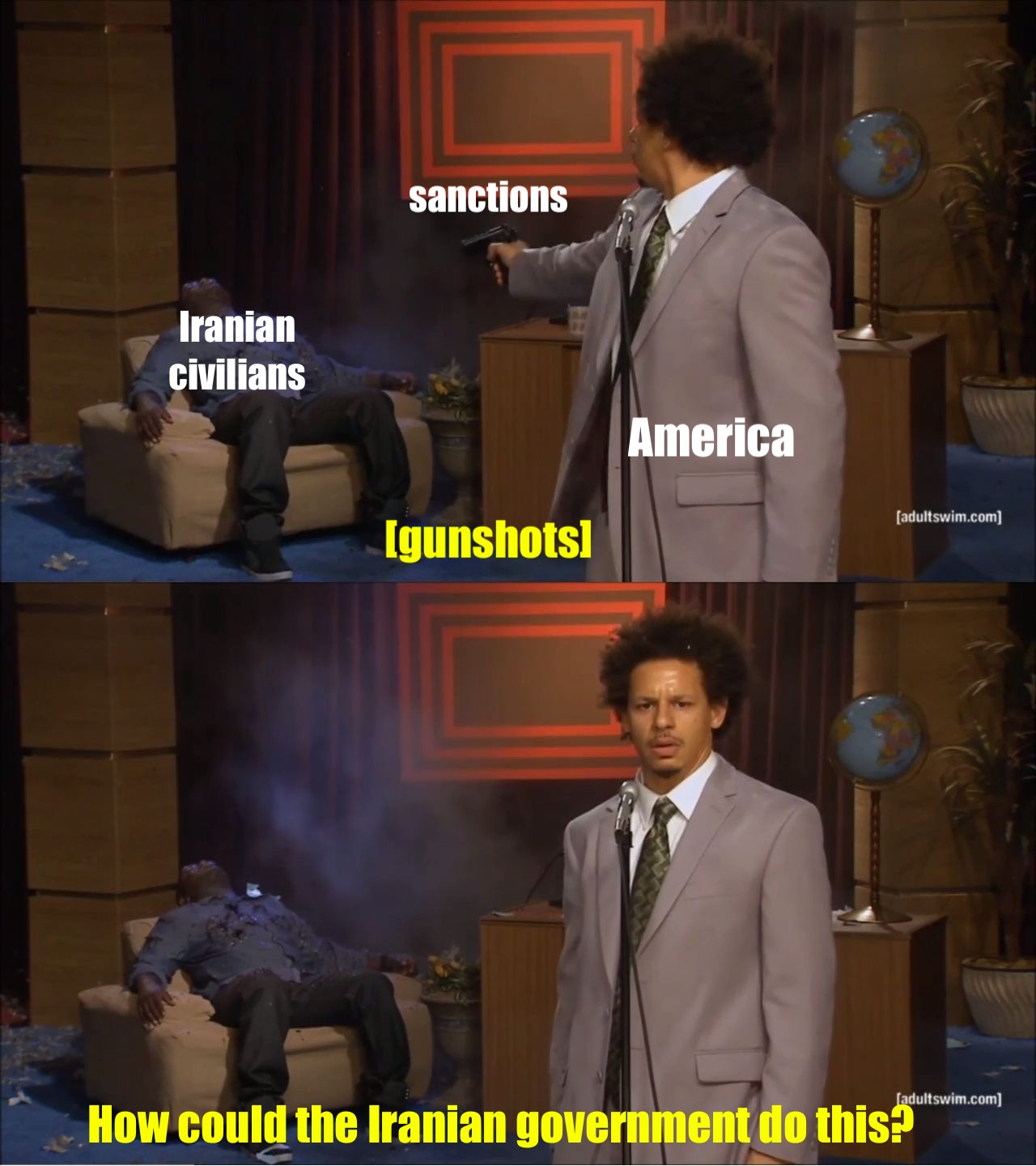 “The International Monetary Fund @IMFNews is projecting a 3.6% decline in #Iran’s economy next year,” tweeted Secretary of State Mike Pompeo. “That’s what happens when the ruling regime steals from its people and invests in Assad — instead of creating jobs for Iranians, they ruin the economy.”

Sanctions are so weird. Imagine if the US government had listed twelve ridiculously extreme demands of Tehran, and then when those demands weren’t met they launched a few dozen Tomahawk missiles into an Iranian suburb. And imagine, if you will, what the response would be if Secretary Pompeo had then issued a tweet saying “Boy, it sure was awful of the Iranian regime to launch those missiles at its own civilians!”

He would never do such a thing, of course, because nobody would buy it. But for some weird, entirely narrative-based reason, the US government can get away with killing the same number of civilians by depriving them of food and medicine and say it’s Iran’s fault for not bowing to Washington’s twelve demands. The civilians would be just as dead as they would have been if they were killed by Tomahawk missiles, and the US government would be just as culpable for their deaths as they would have been if they’d killed them by missile strike. We can be absolutely certain that the US government would acknowledge such economic sanctions as an act of war (which they unquestionably are) if any foreign nation ever implemented anything similar against America. But for some weird, stupid, nonsense reason, the medieval siege tactic of starving them to death and cutting them off from supplies is something that can still be blamed on a sovereign nation for refusing to obey the commands of a foreign government. For some weird, stupid, nonsense reason, sanctions are the only form of warfare where it is considered both legal and acceptable to deliberately target a civilian population with lethal force.

My grandmother in Iran has gone blind in one eye because she can no longer access her diabetes medicine. Thanks America

The responses to this Tweet caught me off guard. Thank you for the kind words. But now I feel selfish for writing it. I didn’t want or expect sympathy; I wanted to make a point about the impact of sanctions on Iran — that it’s the ordinary people who suffer. And for what?

This, by the way, is all coming after the UN’s highest court, the International Court of Justice (ICJ), ordered the United States to remove any impediments to humanitarian aide in the sanctions that it has implemented, to which Washington responded by withdrawing from two international agreements which could lead to any legally binding rulings by the ICJ. Any other nation which refuses to comply with UN rulings is branded a rogue nation by the US-centralized empire and targeted for regime change, but when the US does exactly the same thing we’re meant to look at it as perfectly normal and acceptable.

The US has defended its dismissal of the ICJ ruling by citing the exemptions it has made for humanitarian aide in its sanctions, with Secretary Pompeo asserting the following:

“Existing exceptions, authorizations, and licensing policies for humanitarian-related transactions and safety of flight will remain in effect. The United States has been actively engaged on these issues without regard to any proceeding before the ICJ. We’re working closely with the Department of the Treasury to ensure that certain humanitarian-related transactions involving Iran can and will continue.”

“Not only is he not being accurate, he is lying,” Trita Parsi of the National Iranian American Council told the Real News of Pompeo’s remarks. “The Trump administration has not issued a single license since they took power. They know quite well that they’re doing everything to scare banks away from the Iranian market, which then is affecting the ability for the Iranians to pay for medicine and medical supplies, even though that is supposedly exempt. So essentially what they’re saying, hey, we made those exempt. Yes, but you have targeted the financial system so harshly, so indiscriminately, so no bank is willing to handle transactions with Iranian banks. And as a result the Iranians cannot buy medical supplies, and their medical shortages are a direct result of the sanctions.”

What will Secretary Pompeo say when civilians begin dropping dead? Will he claim that “the price is worth it”, as his predecessor Madeleine Albright said of the thousands of Iraqi children killed in sanctions upon Iraq? Will he cite the constantly recurring lie that it is because Iran is the world’s top sponsor of terrorism? Will he claim that it is because it is somehow wrong for Iran to defend its ally Syria from the violent jihadist factions who attempted to effect regime change in Damascus with western backing? Or will he just be honest, and admit that it’s because Iran has one of the few governments in the strategically crucial and resource-rich Middle East which has refused to be absorbed into the blob of the US empire?

Hey, a girl can dream.

Interview Transcript: Whitney: Today I am joined by the legendary author and researcher Doug Valentine, whose books, including “The CIA as Organized Crime,” among several others, are essential reading for understanding how covert and illegal intelligence operations have shaped, and continue to shape, conflict and policy in the U.S. and beyond. In this interview, we Read More…

We’re in the midst of something that’s never happened in human history. Since the birth of the industrial revolution, our planet has been plagued by war. In the midst of it all, what has really transpired behind the scenes — and the true causes of these conflicts — has been hidden behind a screen of misinformation and secrecy. Read More…

Welcome to The Daily Wrap Up, a concise show dedicated to bringing you the most relevant independent news, as we see it, from the last 24 hours (12/19/18). As always, take the information discussed in the video below and research it for yourself, and come to your own conclusions. Anyone telling you what the truth Read More…