In April 2018, the head of Russian Special Operations Command, Gen. Raymond Thomas, complained that the Russians are having to use their electronic warfare (EW) capabilities in Syria in order to deter actions of the US-led coalition there.

“Right now in Syria we are operating in the most aggressive EW environment on the planet from our adversaries. They are testing us everyday, knocking our communications down, disabling our EC-130s, etcetera,”he started ignoring the fact that the US-led coalition had illegally invaded the country while the Russians are in Syria upon request from its legal government. 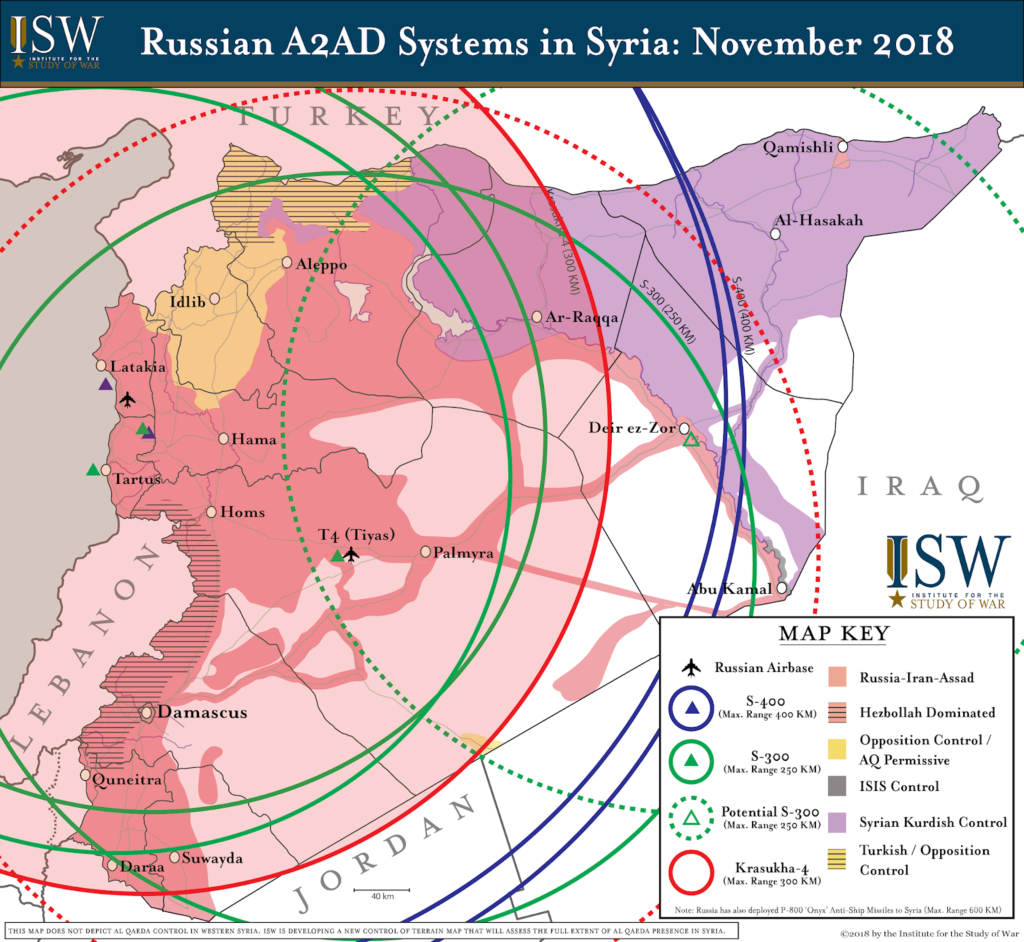 On November 30, the Institute for the Study of War (ISW) a US-based think tank affiliated with large defense contractors, released a fresh report, which also complains about the Russian decision to expand its EW capabilities in Syria and repeats remarks that it has a negative impact on the situation in the country.

In particular the ISW addressed reports about the following systems (source):

Krasukha-4: Russia deployed the Krasukha-4 to Hmeimim Airbase by October 2015.[23] The system is capable of suppressing satellite navigation, communication networks, airborne early-warning systems, and ground-based radars at ranges up to three hundred kilometers.[24] Russia reportedly deployed a second Krasukha-4 to Syria in September 2018.[25] This system is likely positioned at the T4 (Tiyas) Airbase in Central Syria alongside the new battalion of S-300s.

Leer-3: Russia reportedly deployed the Leer-3 (RB-341V) to Syria prior to March 2016.[26] The Leer-3 uses unmanned aerial vehicles to jam mobile devices such as cell phones and computer tablets within a one hundred kilometer radius. [27] It can also provide firing coordinates for the location of these devices for artillery and airstrikes. Russia may have used this system to disrupt the operations of opposition groups ahead of pro-regime military operations.[28] Russia likely also used the system to identify and target opposition-linked facilities such as hospitals.[29]

Zoopark-1: Russia deployed the Zoopark-1 (1L219) to Palmyra in Central Syria in March 2016.[30] Zoopark-1 identifies the origin of enemy artillery strikes for counter-battery fire.[31] Russia likely used this system to support pro-regime operations to secure Palmyra as well as its surrounding oil and gas fields from ISIS in 2016.[32]

Moskva-1: Russia may have deployed the Moskva-1 (1L267) to Syria. Russia previously deployed this system to Ukraine in late 2015 according to the Ukrainian Ministry of Defense.[33] Russia has tested other electronic warfare systems in both Ukraine and Syria including the Krasukha-4 and Leer-2.[34] The Moskva-1 provides targeting information to increase the effectiveness of electronic warfare systems against aircraft at a radius of up to four hundred kilometers.[35] Russia could have used the system to protect its facilities in response to intensified airstrikes by Israel in Syria in 2017.

However, the most interesting claim is that the Russian EW systems are allegedly deployed there to help Assad “chemical weapons attacks”.

Russia ultimately aims to use its technical capabilities as part of its wider campaign to force the withdrawal of the U.S. Anti-ISIS Coalition from Syria. Russia can use these systems to decrease the overall freedom of maneuver – and increase the overall risk – faced by the U.S. in Syria. Russia’s combined air defense and electronic warfare networks will increase the cost of aerial and naval operations by the U.S. in Syria and the Eastern Mediterranean. It raises the cost of future airstrikes to deter chemical weapons attacks by Syrian President Bashar al-Assad. It also increases the cost of future strikes by Israel against Iran in Syria. The U.S. and Israel both must be prepared to suppress a larger number of air defense systems and use more expensive stealth aircraft such as the F-35 in Syria.[42] Russia stands to gain a long-term strategic advantage over NATO through its new capabilities in Syria. The U.S. and NATO must now account for the risk of a dangerous escalation in the Middle East amidst any confrontation with Russia in Eastern Europe.

Translating to a normal English, the think tank claims that the growing Russian EW capabilities as well as Syrian air defense capabilities impact negatively ability of the US and Israel to carry out acts of illegal aggression against Syria. The democracy is in danger.

US Admits to Implanting Cyberweapons in Critical Russian Infrastructure

(AntiWar) A new report from the Washington Post today quoted a series of Obama Administration officials reiterating their official narrative on Russia’s accused hacking of the 2016 election. While most of the article is simply rehashes and calls for sanctions, they also revealed a secret order by President Obama in the course of “retaliation” for Read More…

Russian President Vladimir Putin broke with Foreign Minister Sergey Lavrov — who had earlier vowed to expel 35 U.S. diplomats in response to the same move by the Obama administration — announcing Russia would not stoop to unilateral pettiness displayed by outgoing American leadership, stating: “We reserve the right to retaliate, but we will not sink Read More…