Will we know who to guillotine when this stock and bond market bubble bomb goes off?

The following is a recap from my recent post on an article by New Scientist about an intense in-depth study done by 3 PhD’s; Dr. Stefania Vitali, Dr. James B. Glattfelder, and Dr. Stefano Battiston all from the Swiss Federal Institute of Technology in Zurich:

This 36 page intensely detailed study of the data set shows how 147 companies own 40% of the shares of 43,060 transnational companies.

“Relationships between 43,000 transnational corporations has identified a relatively small group of companies, mainly banks, with disproportionate power over the global economy.”

This information is not to be taken lightly. The 36 page study is the largest most comprehensive study of its kind in history.

That network of control also shows it is more unequally distributed than wealth. Top ranked companies hold 10 times more control than expected based on wealth.

The existence of an economic super-entity, as the study authors call it, has never been documented before.

There are easy solutions to what seems to be some very complicated issues. The top 49 financial holding companies have changed a little since the authoring of the study. Near zero interest rates for the last 8 years has facilitated the largest mergers and acquisitions in history. This has made “the few” have more control and, as you know, a lot richer.

This needs to stop, and I suggest the public must demand that any company industry leader that has more than 5% of market share needs to be dissolved, and not broken up like they did in 1911 with Rockefeller’s Standard Oil, as Mr. Rockefeller became twice as rich 12 months after his monopoly crumbled. This time around, a rule requiring the smaller units to have 20% of shares held by the community and 20% shares held by employees, is a must. A major one time redistribution of wealth is justified in an economic emergency brought on by those putting the public at systemic risk.

Example 2: Health care is another industry that has abusers violating the Sherman Antitrust Act, Title 15 United States Code Chapter 1 — a class of individuals and firms that include virtually the entire health-care industry in the USA. They have taken health care as a percentage of the US economy from about 3% to 20% in 30 years. If we do not stop this now, the federal government, state governments, pensions, and the American way of life will collapse. This knowledge should make you sick to the stomach and furious with outrage.

Example 3: Banking is one of the worst abusers of their near monopoly and most large banks are listed as too big to fail and so are behaving badly. Bernie Sanders said in this year’s campaign,

Last week, a story broke on a leaked email from Wikileaks from the head of Citigroup, Michael Froman to John Podesta one month before election on October 6, 2008, and two months before Citigroup got the largest bail out in history, discussing who should be in the next US cabinet.

Michael Froman is an American lawyer who has served as the U.S. Trade Representative since 2013. He has been assistant to the President of the United States and Deputy National Security Advisor for International Economic Affairs, a position held jointly at the National Security Council and the National Economic Council. He is part of the group writing the trade deals of TPP and TTIP. Those deals need to be stopped in their tracks until a decentralization of corporate control occurs.

Of course the elected officials can consult with whom they want, but when they are donors to the campaigns and run near monopolies there needs to be an overview and transparency, and not one dime from tax payers in the form of bailouts or subsidies. Why is a business leader, whose company should have gone bankrupt and technically did, and (the company) has been fined multiple times and charged with a felony be selecting who should run the US government? Disgusting!

As evidenced in the above mentioned Wikileaks email, and before the election in 2008, Michael Froman suggested the following people be appointed to cabinet positions and most were appointed. This is called a “puppet” government and or banana republic: Eric Holder – Justice Department, Janet Napolitano – Homeland Security, Robert Gates – Defense, Rahm Emanuel – Chief of Staff, Peter Orszag – Office of Management and Budget, Arne Duncan – Education, and three choices for Secretary of Treasury: Robert Rubin, Larry Summers and Timothy Geithner.

The richest 49 people are reported on by mainstream media all the time and here are the top two and a link to the wealthiest 49 people in the world.

Why doesn’t the mainstream media report on the top 49 most powerful people, as disclosed by the Swiss Institute of Technology study mentioned above? The companies these people run, as the study says “hold 10 times more control than expected based on wealth.” Obviously, it is because these holding companies own the controlling shares of the media companies. This needs to be changed immediately. Those holding companies should not be allowed to own media shares or have any say in their management as it is a conflict of interest. If you look into Reuter’s (founded 1851) history you will see it was purchased by the Rothschilds, a banking family and consolidated media control as early as the beginning of the 20th century. Reuters operates in more than 200 cities in 94 countries in about 20 languages and has way too much consolidated control over the media industry which may still include the Associated Press.

From the Swiss professor’s study, the largest transnational holding companies are listed below:

The following are the top few most powerful holding company chairmen. I think it is time we sit down with these people and ensure they do not have any conflict of interests. We should also, immediately demand they don’t hold positions on each other’s boards to reduce their power and influence. This is extremely important as these people are putting the world under a systemic risk and therefore we are hostage to taxpayer bailouts or bail-ins that give derivatives priority over deposits.

BARCLAYS PLC – John McFarlane, Chairman
He spent eighteen years with Citibank, as head of Citibank in Ireland and the United Kingdom. Then he became the Group Executive Director of Standard Chartered Plc. based in London and Hong Kong. He was Chief Executive of the Australia and New Zealand Banking Group Ltd. (ANZ). Then joined the board of the Royal Bank of Scotland; then the board of Aviva PLC. and became Chairman. He was president of the International Monetary Conference (the annual meeting of the heads of the world’s major banks and central banks) and was chairman of the Australian Bankers’ Association.

AXA – Thomas Buberl, Chairman
AXA was the second most powerful transnational corporation in terms of ownership and thus has corporate control over global financial stability and market competition with Barclays and State Street Corporation taking the 1st and 3rd position, respectively. 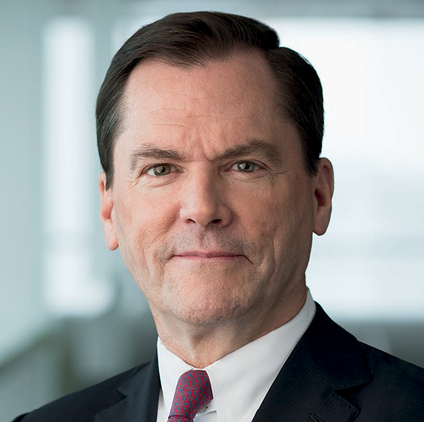 The worlds largest 49 holding companies are financial companies and their small number of leaders control markets. So you may see different logos such as Shell, Esso, BP or Coke verses Pepsi, but really these leaders set the company’s tone and direction. This is a near monopoly with different logos floating around. The study clearly concludes that, globally, top holders are at least in the position to exert considerable control, either formally (e.g., voting in shareholder and board meetings) or via informal negotiations.

To quote from another study done by Oxfam in February 2016:

“CORPORATE DOMINATION; a lack of competition presents opportunities for companies to set prices that enable them to extract returns over and above real value and productivity.”

It is all about following the money. Going deeper in this type of analysis would help form better decisions and rules in making global economics more stable and therefore less likely to cause volatile swings. This definitely would go a long way to prevent the connected few front-running you in wealth transfer through their investment companies. The data set used by the Swiss Federal Institute of Technology is called Orbis and we now need to drill down on that data set and see who owns the shares to know who these powerful men actually bow down to. These leaders need to be asked if they understand the Sherman Antitrust Act. They also need to be asked if they have any conflict of interest and have them sign off yearly under oath stating they do not.

The ‘group of 49’ are always ready to further fleece the people, yet they just don’t want to be blamed, and with such rising awareness in current years, they are choosing their steps wisely. They are also trying to poke the bear as much as possible so they can blame someone else for the market crash – war – which seems to work as a great distraction for that purpose. Big players are sitting on tons of cash. Warren Buffett has $73 billion and the smart money has sold most European bank shares.

So it has never been riper for this fleecing, as then the side line cash will be deployed, making for what I call a super-boom in Asia but leaving pensioners wondering what happened to their investments.

Let’s fleece them before they fleece us, as there is something you can do about it; the ‘power of the individual’ and yes one bit at a time: Please note I am not a financial advisor and suggest you seek one for all your needs but remember, they are paid for by corporations and live off your fees which presents a complete conflict of interest. The first thing you could do is shop local and or avoid all national companies.

Next, you could take your money out of the bank and put it in a lock box or buy physical silver coins. The banks are stealing your money with fees and fraud and it is at risk. Banks are allowed to leverage your money and put everyone at systemic risk by at least 10x, so for every $1,000 dollars you take out you hit that bank by $10,000! Hit ’em hard folks and take these felons down.

You should also learn about how computational trust can ensure transparency in auditing company shares or finances.

CEO Martin Shkreli, also known as “Pharma Bro,” was arrested Thursday for what U.S. prosecutors are calling a “Ponzi-like scheme” at his former hedge fund and a pharmaceutical company he previously headed. Shkreli was widely known for his monstrous actions of increasing the price of the drug Daraprim, a decades-old drug used to treat toxoplasmosis, Read More…

Why The European Union Is Building Its Own Army

On November 13, 2017, 23 out of 28 European Union (EU) states signed a declaration to create what is expected to form the nucleus of a joint European army. The five countries that won’t be taking take part are Great Britain, Denmark, Ireland, Malta, and Portugal, though Ireland previously expressed some interest in joining. The defense Read More…

A lot of us figured this was coming, but now the mainstream media is predicting the obvious in print. In a piece by contributor David Weisberg over at The Hill, he declares that Obama will make sure to pardon Hillary Clinton “for any violations of federal law she might have committed while she was secretary Read More…