The United States presents itself to the world as a beacon of liberty and a proponent of human rights around the world, ready and willing to stand up for and defend the downtrodden. Florida Senator Marco Rubio recently said that the world looks to the U.S. as an example of democracy. This myth is not believed outside of the United States’ borders, and decreasingly within. There is simply too much evidence to the contrary.

The U.S. has been at war for over 220 of its 241 year history. During that time, it has shown a complete lack of respect for the human rights of both the citizens of the nations against which it wages war, and its own soldiers. We’ll take a look at examples from recent history, and see how the U.S. continues these barbaric practices today. 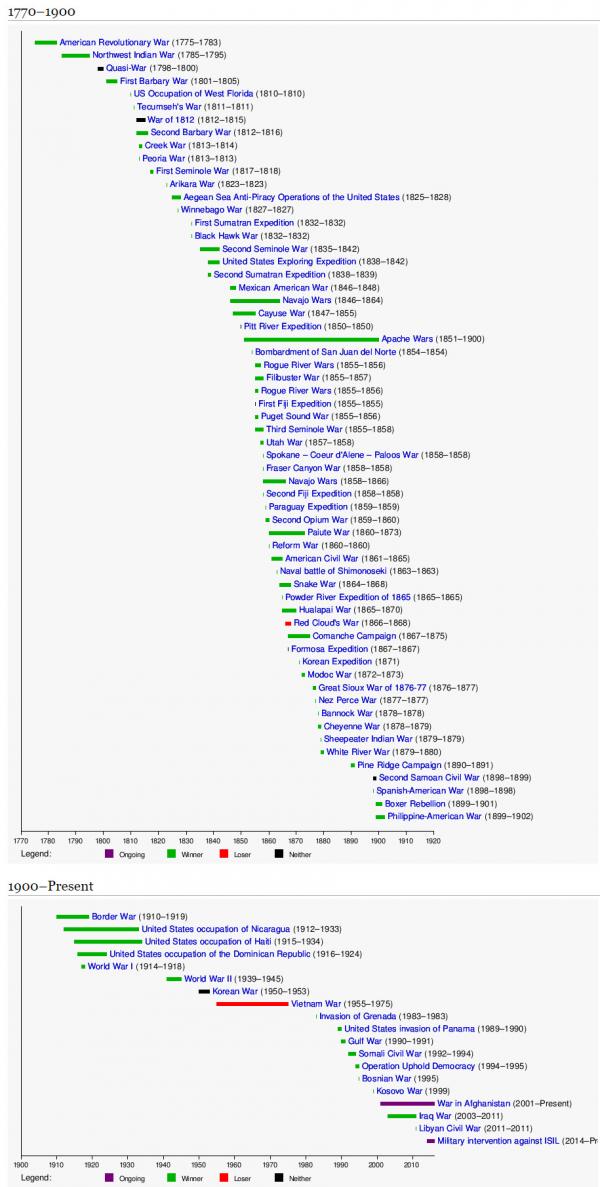 During the U.S. war against Viet Nam, which lasted for several years, conservative estimates indicate that at least 2,000,000 men, women and children were killed. Entire villages were burned; soldiers were told to assume that anyone, of an age, was the enemy.

U.S. soldiers gave poisoned cookies to children seeking their help. The My Lai massacre, in which between 350 and 500 innocent people were killed, mostly women, children and elderly men, garnered international publicity, but was only one example of U.S. barbarity.

U.S. soldiers returned home from this and later wars with severe physical and emotional problems. Veterans’ organizations worked for years to have the effects of ‘Agent Orange,’ a chemical defoliant used in Viet Nam that caused birth defects in the children of soldiers who used it, recognized by the government so they could get government assistance. A generation later, the reality of Gulf War Syndrome was denied for years by the U.S. government.

How does this continue in the current environment? When the U.S. invaded Iraq early in the administration of President George Bush, it bombed residential areas in a country where over half the population was under the age of 15. It destroyed government institutions, even as it protected oil lines, leaving millions of people without essential services.

In Yemen, drones have killed at least 6,000 people. In the first drone attack authorized by then President Barack Obama, 34 people were killed. Of these, two were suspected of having ties to so-called terrorist groups. The other 32 were innocent men, women and children. And these atrocities continue to this day.

In Syria, the U.S. is supporting radical groups that are causing untold suffering. At least one third of the population of Syria has fled their homes; recently, due to the efforts of the Syrian army and its allies, some have begun to return. The death toll, directly attributable to the actions of the U.S., is at least half a million.

When it comes to a nation’s need to defend itself, the U.S. again has no equal when it comes to hypocrisy. Palestinians who defend themselves with rocks against the U.S.-provided weaponry with which Israel kills and oppresses them, are called terrorists. IDF terrorists and settlers, also terrorists, living in the West Bank in violation of international law, kill unarmed Palestinians with impunity.

What does all this mean for the basic human rights of the people whose nations fall victim to U.S. imperialism? Death, disease, homelessness, life in refugee camps, hunger, lack of medical care, lack of education opportunities, and much more.

The United States, despite its own claims to the contrary, has one of the worst records of human rights abuses of all the countries on the planet. They are worsened in war time, and as I mentioned earlier, the U.S. has been at war almost constantly since 1776.

This is the United States, that self-proclaimed beacon of peace and justice. This is international hypocrisy at its most blatant and deadly. People within the U.S. and without are working tirelessly to resolve these issues, but they are opposed by powerful interest groups. Yet such shocking cruelty and violations of international law and the human right of millions of innocent people cannot continue forever. The end of the injustices perpetrated by the (Deep State Controlled)United States will be a welcome day around the world.

Authored by Robert Fantina via AHTribune.com

Does A Newly Published Study Prove The 5G-COVID19 Connection?

A newly published editorial posits that there exists a connection between millimeter waves used by 5g technology and COVID-19. Is this the smoking gun or something else entirely? A recently published editorial has caused controversy as supporters claim it proves a connection between 5G and COVID-19, and detractors allege pseudoscience. The editorial, 5G Technology and Read More…

InfoWars Steals/Alters TLAV Content, EUA & The Pandemic Of The Vaccinated

Welcome to The Daily Wrap Up, a concise show dedicated to bringing you the most relevant independent news, as we see it, from the last 24 hours (7/23/21). As always, take the information discussed in the video below and research it for yourself, and come to your own conclusions. Anyone telling you what the truth Read More…

Meet The Kakistocracy: How Child Abuse Is Used To Perpetuate Their Control

Kakistocracy is defined as “rule by the worst.” Today on the program Dr. Tjeerd Andringa of the University of Groningen joins us to discuss his theory of how the kakistocracy uses child abuse to perpetuate their control, both over the victims of that abuse and its perpetrators. We also discuss what the vast majority of Read More…