One can call Saudi Arabia – the world leader in weapons imports and decapitations per capita – many things, but a bastion of “democracy and moderation” is not one of them.

One could, for example, call the Saudi Kingdom the biggest financial sponsor of terrorism – not only al-Qaeda (recall who funded and organized the Sept 11 attack), but also ISIS, as was confirmed on many separate occasions, but most notably in a leaked email from Hillary Clinton in which the former secretary of state said that “we need to use our diplomatic and more traditional intelligence assets to bring pressure on the governments of Qatar and Saudi Arabia, which are providing clandestine financial and logistic support to ISIL and other radical Sunni groups in the region.”

And yet, none of this was mentioned in today’s Trump speech, who instead deliberately diverted away from the real culprits behind the global rising wave of terrorism, and focused exclusively on Iran (with a little dose of Syria thrown in for good measure) which only yesterday held a democratic presidential election (in which the hard-liner lost), as the biggest source of instability and terrorism in the world. This is what Trump said:

But no discussion of stamping out [the threat of terrorism] would be complete without mentioning the government that gives terrorists all three—safe harbor, financial backing, and the social standing needed for recruitment. It is a regime that is responsible for so much instability in the region. I am speaking of course of Iran.

From Lebanon to Iraq to Yemen, Iran funds, arms, and trains terrorists, militias, and other extremist groups that spread destruction and chaos across the region. For decades, Iran has fueled the fires of sectarian conflict and terror.

It is a government that speaks openly of mass murder, vowing the destruction of Israel, death to America, and ruin for many leaders and nations in this room.

Responsible nations must work together to end the humanitarian crisis in Syria, eradicate ISIS, and restore stability to the region. The Iranian regime’s longest-suffering victims are its own people. Iran has a rich history and culture, but the people of Iran have endured hardship and despair under their leaders’ reckless pursuit of conflict and terror.

Until the Iranian regime is willing to be a partner for peace, all nations of conscience must work together to isolate Iran, deny it funding for terrorism, and pray for the day when the Iranian people have the just and righteous government they deserve.

And this is how Iran’s foreign minister responded on Twitter, shortly after Trump’s speech, when in just 23 words Iran’s Javad Zarif exposed the hypocrisy in Trump’s 3,400-word laudation of Saudi Arabia, which just became one of America’s biggest friends, after it promised to buy over half a trillion in weapons from the US over the next decade.

This is what Zarif said: “Iran—fresh from real elections—attacked by @POTUS in that bastion of democracy & moderation. Foreign Policy or simply milking KSA of $480B?”

Iran—fresh from real elections—attacked by @POTUS in that bastion of democracy & moderation. Foreign Policy or simply milking KSA of $480B? pic.twitter.com/ahfvRxK3HV

Zarif does have a point: Trump’s words – hollow as they may be – are just that, meanwhile he is set to return to the US with over $300 billion in funding commitments which are sure to make shareholders of the US Military-Industrial complex richer than ever.

As for the upcoming even greater and more violent middle-eastern wars, as Saudi Arabia puts all of its newly purchased US “toys” to use, that’s a topic for a different post although the following “simplified” chart of the ongoing Syrian civil war is a good place to start… 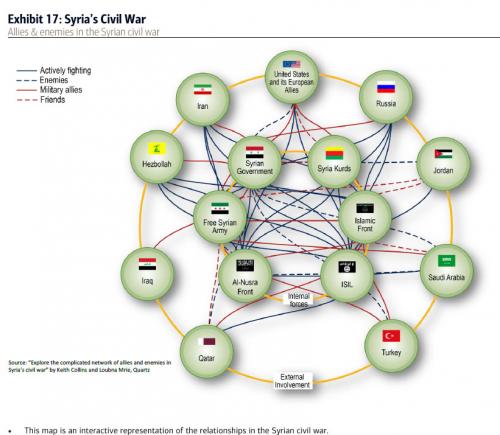 Terrorists Shoot Down Russian Planes With U.S. TOW Missiles After McCain Calls For It

In three and a half decades, the United States has come full circle in terms of its publicly stated strategy overseas. From the late 1970s when the U.S. armed the Mujihadeen “rebels” to draw in and fight the Soviets in Afghanistan to 2016 when the U.S. has given Syrian “rebels” (aka moderate terrorists) TOW missiles Read More…

Welcome to The Daily Wrap Up, a concise show dedicated to bringing you the most relevant independent news, as we see it, from the last 24 hours (9/24/20). As always, take the information discussed in the video below and research it for yourself, and come to your own conclusions. Anyone telling you what the truth Read More…

UPDATE 2: According to the Syrian media, 3 soldiers were wounded in the Israeli air raid late on December 25. The Israeli Air Force reportedly fired at least 22 missiles. The strike was aimed at alleged Iranian shipment in the Damascus International Airport area. Pro-government sources claim that most of them were intercepted. It should be Read More…