Welcome to The Daily Wrap Up, a concise show dedicated to bringing you the most relevant independent news, as we see it, from the last 24 hours (5/24/18).

The Trump administration has been eagerly hoping that North Korea would do something dramatic so they could hang the summit’s engineered failure around its neck. Yet when it became clear they might actually be looking to come to a peace agreement, Trump decided today to cancel the summit — who would have guessed — citing “tremendous anger and open hostility.” Does he mean by John bolton you ask? No, Trump is referring to the one statement made by Kim Jong-Un after Bolton and Pence openly sabotaged the meeting with hostility and terms like the “Libyan model” or threats of turning North Korea into Libya or calling to preemptively nuke the country, as Bolton has done fervently numerous times in the recent past. North Korea has taken leaps and bounds incredibly offering to do everything the US asked, and yet one return statement calling out John Bolton and Mike Pence’s openly hostile attitude and warmongering rhetoric, and Kim Jong-Un is the angry hostile one.

Just as I stated from the very beginning, those pulling the strings in Washington never wanted this peace, they were hoping for more aggressive actions from North Korea like it has shown in the past. In response to the recent war drills for instance, which were done for exactly that purpose, and that were absurd during a peace process to begin with. The hope was to use the desired response to point at the North and say “see they are the ones who don’t want peace,” but instead they got peace between the Koreas, and they can’t have that, so they sent their leading resident war hawk to send Kim a very specific message: Deal with us and you will end up like Libya. When all they got was called out for it by North Korea, with few options left, they just decided to take what they could get, and put a little social engineering spin on it, US-style — meaning about as subtle as a brick through a window.

Kim calls Pence a “political dummy,” says the US is “unbridled and imprudent,” and this is considered “tremendous anger and open hostility?” Come on… especially when what we see on the other side is quite literally open hostility and aggressive threats. The US is really embracing that old saying, “accuse the opposition of that which you are guilty;” classic social programming and propaganda tactics.

Even more revealing is the fact that just this morning, in an exclusive with Fox, Trump said that the US might endorse a more “gradual” process of denuclearization, clearly still at least pretending to seek peace, even though the comments from North Korea, were already made. Then a few hours later he released this statement directed at North Korea: 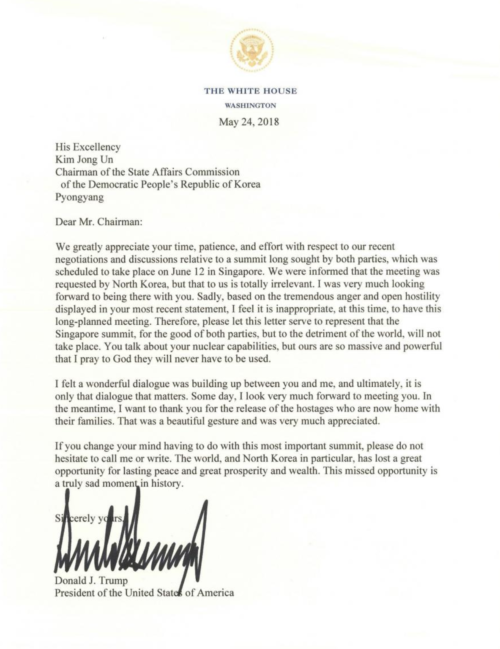 There are a few points in this ridiculous letter that I cover in the video below, but the main issue I take is with the part that says, “If you change your mind having to do with this most important summit, please do not hesitate to call me or write,” as if it were North Korea choosing to end this summit, instead of the US pulling out over some rightfully deserved comments calling out its apparent attempts to derail the meeting. As if it weren’t clear enough, all day today North Korea has been making it quite clear that it is still willing to meet, which should show us all quite a bit.

Trump’s speech following the statement’s release was focused on denuclearization, as if North Korea had not offered to do just that many, many times. Again, clearly trying to control the perception of what is happening, to frame it as some aggression or failure on North Korea’s part, when it was so clearly the opposite. As always, for all those who have such a conditioned hyper-polarized view of the world, this is not me implying that North Korea is some bastion of freedom and liberty, where all its people are skipping through rainbows and eating ice-cream all day. It is indeed possible for the US to be at fault and not imply that Kim Jong-Un is some saintly figure who can do no wrong. It is indeed possible to state that North Korea is the one being wronged here, yet still understand that its government is just as corrupt as most governments. The two are not mutually exclusive, despite the mainstream media’s best efforts to make that the case. The recent deceptive tactics of the Trump administration in regard to this dealing with North Korea must be called out for what they are, regardless of the state with which it deals.

Interestingly and revealingly enough, simultaneously, Mattis was across the country, telling Air Force academy graduates to prepare for war. Literally, that “a war is coming.” So either Trump is just being moved around as a game piece, and has no idea what’s really going on, as his closest advisors clearly had no intentions of fighting for peace, or he was aware all along that peace was never the plan. Either way, we must see what’s really going on here.

Welcome to The Daily Wrap Up, a concise show dedicated to bringing you the most relevant independent news, as we see it, from the last 24 hours (1/13/19). As always, take the information discussed in the video below and research it for yourself, and come to your own conclusions. Anyone telling you what the truth Read More…

Today Americans exist as a conquered people. They have lost the Bill of Rights, the amendments to the Constitution that protect their liberty. Anyone, other than the One Percent and their political and legal servants, can be picked up without charges and detained indefinitely as during the Dark Ages, when government was unaccountable and no one had Read More…

A spokesman for US Centcom is denying any US coalition involvement in reported airstrikes against a Syrian military site along the Iraqi border. Details on the strike were still scant, but US officials say no airstrikes took place by any coalition members in the area. Syrian state media had reported that drones, presumably American, attacked the site Read More…