Politicians and mainstream media are praising the appointment of former FBI Director Robert Mueller as head of an investigation into alleged collusion between Russia and President Donald Trump. But Mueller’s poor handling of the 2001 anthrax attacks should give many cause for concern.

In October 2001 – less than a month after the 9/11 terror attacks – weaponized anthrax spores were sent through the U.S. mail system to prominent politicians and journalists. The anthrax attacks generated hysteria and panic, as well as created the perception that terrorism was going to remain a major threat, with 9/11 representing just the first wave.

The anthrax attacks also provided the George W. Bush administration with the opportunity to create a three-way connection in the public consciousness between the 9/11 attacks, the anthrax attacks, and Saddam Hussein. The “WMD lies” that would lead the U.S. into war in Iraq were hatched from one initial lie: that the anthrax mailings had fingerprints that could be traced back to the Iraqi government’s biological weapons program and that they represented a second wave of terrorism.

Major players in the U.S. government made strong efforts to link the anthrax attacks to the Iraqi government – efforts that Mueller played no part in. But in the following six years, Mueller did participate in a public disinformation campaign that muddied the waters regarding the 2001 anthrax attacks.

He and his bureau were in a position to unravel the underlying rationale for mounting an illegal invasion that left over a million Iraqi civilians dead. Instead, they worked to bury that rationale and stoke fears that would help to prop up public support for the invasion. Looking back at the way in which the case was handled, it is clear that Mueller may not be the most suitable candidate for heading the ongoing investigation into “Russiagate.”

As early as Nov. 9, 2001 – less than one month after the anthrax attacks began – the FBI had identified anthrax in the letters as being of the “Ames strain,” a strain of anthrax that was isolated by U.S. researchers in 1981. Due to its domestic origins, the FBI concluded that the attacks were likely perpetrated by someone working within the U.S. and not by a foreign actor.

Despite having this knowledge, the Bush administration sent then-Secretary of State Colin Powell to the UN with a prop vial of anthrax in order to obtain support for the Iraq War. Mueller could’ve turned the course of events at the time by making sure the press was aware that the most likely culprit was inside the U.S., but instead chose not to interfere with Bush’s neoconservative agenda. Powell’s presentation of “evidence” of Iraq’s alleged possession of chemical and biological weapons formed a major part of the U.S. effort to build a case for war in Iraq – although the country’s possession of these weapons would eventually prove to be a falsehood. 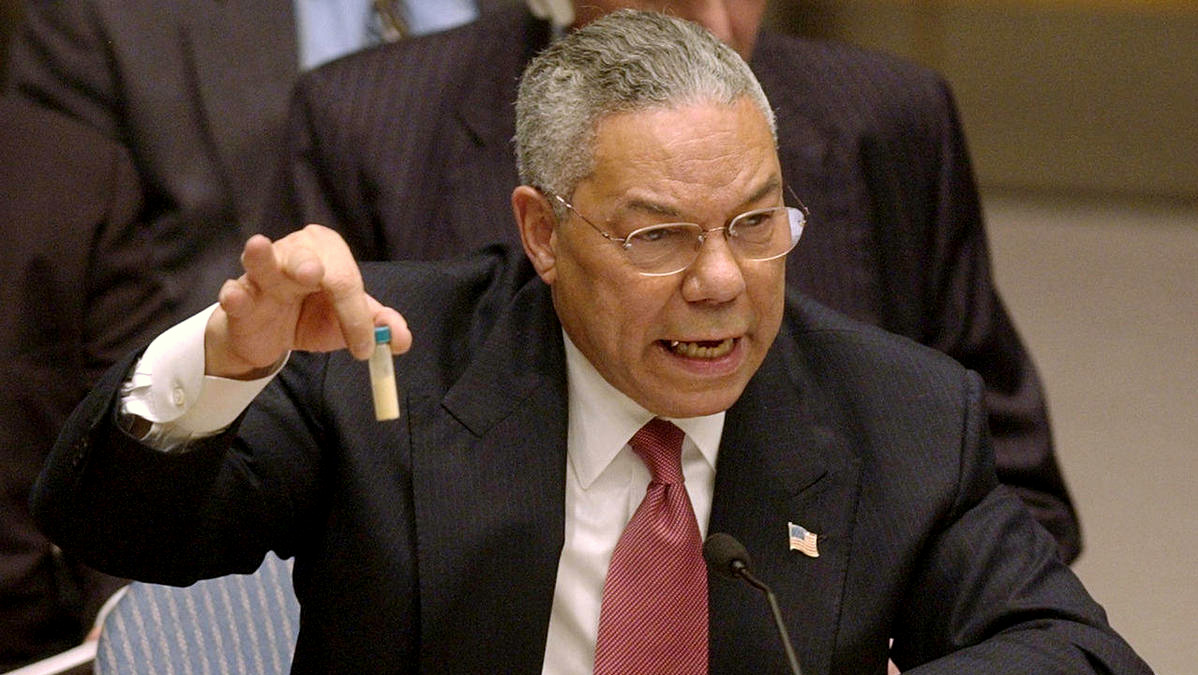 Colin Powell holds up a vial he said could contain anthrax as he presents evidence of Iraq’s alleged weapons programs to the United Nations Security Council in this Feb. 5, 2003 file photo. (Photo: AP/Elise Amendola)

In another pivotal moment in the case, Mueller privately briefed Senator Patrick Leahy (D-VT) and former Senator Tom Daschle – both of whom were targeted with anthrax letters – regarding the FBI’s prime suspect, a retired bioweapons scientist named Steven Hatfil.

Mueller’s best evidence came from bloodhounds, who had evidently traced the scent from the anthrax letters to Hatfil’s apartment. What Mueller neglected to mention is that bloodhound scent evidence is often inaccurate and has even led to wrongful convictions. But it was too late for Hatfil, as the press had already begun to crucify him after the FBI came forward with its “evidence.” Some agents even used the bloodhounds as props in press conferences that could be better described as publicity stunts.

Hatfil’s life was turned upside-down by the accusations. He was hounded by the FBI and other authorities, facing deliberate harassment tactics often referred to as “bumper locking.” He tearfully denied the FBI’s accusations during two news conferences held in August 2002, but by that time his life and career had already been shredded to pieces due to his naming as a “person of interest” in the investigation. Hatfil would later receive a $4.6-million-dollar settlement from the FBI in 2008 after filing a lawsuit against the Bureau, but only after five years of litigation and the destruction of his personal and professional reputation.

But Mueller and the FBI weren’t done yet. That same year, they ended up pinning the attacks on a man named Bruce Ivins, a senior biodefense researcher at Maryland’s Fort Detrick military installation. Their accusation would lead Ivins to commit suicide by overdosing on a combination of Tylenol and codeine, a method of suicide that some thought to be an unlikely choice for someone with Ivins’ level of biological expertise.

Even after claiming to have solved the case, the FBI faced skepticism regarding its conclusions. Leahy spoke to Mueller at a three-hour public hearing, stating that he did not believe that Ivins was the only culprit:

“I’ve looked over a good bit of the evidence on the anthrax case just to contrast prosecutors’ opinions…and I have grave doubts about sufficiency of evidence for proof beyond a reasonable doubt.”

When the FBI decided to give a press conference on the final conclusion of their investigation, Mueller declined to attend, eating dinner at a restaurant about a block away. He instead allowed two lower-ranking investigators to sweat their way through the surprisingly adversarial questions that were lobbed at them by attending journalists.

Video of this press conference shows an almost unanimously incredulous press pool, some even visibly angry over the series of non-answers given to them by FBI officials. They offered only one piece of physical evidence to the public: a flask they said contained spores that they claimed Ivins used to grow a colony of the “Ames strain” during his off-hours at Ft. Detrick. But there was one major problem with their “smoking gun” evidence.

The National Academy of Sciences (NAS) was asked by the FBI to verify the evidence but concluded that anthrax found in the flask could not be traced back to anthrax contained in the letters. But instead of waiting for the NAS to release these findings, Mueller allowed the FBI to pre-empt the NAS with their own press conference. A 2011 report from the National Research Council also called the FBI’s findings into question.

Russiagate: why the anthrax case matters

In light of his poor handling of the anthrax case, one has to wonder: why is the media now celebrating Mueller’s appointment as special counsel for the Russia-Trump investigation? One doesn’t need to look far to find multiple parallels between the false WMD claims made by the Bush administration – which had their origins in the anthrax scare – and the media’s current obsession with finding evidence of Russian meddling in last year’s election. In both cases, the media fixated on questionable evidence and the creation of an artificial “bogeyman” to advance a deeper, more sinister agenda.

Both the false WMD claims that led the U.S. into the Iraq War and the ongoing Russia scaremongering campaign have relied on a vague three-way connection between unrelated parties in order to shoehorn in a larger national security and foreign policy scheme. Under Bush, this was done by artificially connecting 9/11 to the anthrax attacks, and then to Saddam Hussein, creating a climate of fear. That same climate is being recreated now – only this time, the specter is Russia.

Democrats and their allies are using a similar psychological warfare campaign to create a fictitious three-way connection between Trump, Russia and WikiLeaks in the public consciousness during a time of emotional trauma for Democratic voters. The larger theory posits that all three parties were colluding with each other to take down Hillary Clinton — even if no proof has been offered that Russia was WikiLeaks’ source.

This narrative has been bolstered by the use of weaponized mainstream media terms like “fake news” and an increasingly prevalent McCarthy-esque mindset among Clinton voters who are quick to accuse their opponents of being Putin apologists. Even supporters of Bernie Sanders, who was running on the Democratic ticket just as Clinton was, have faced such accusations.

Americans should not want a man who knew the Bush administration was trying to create a fictional connection between Hussein, anthrax and 9/11 to have the final verdict on another new three-way fiction: the conspiratorial web being woven between WikiLeaks, Trump and Russia.

Robbie Martin is a California-based writer and filmmaker who recently produced a 3-part documentary called A Very Heavy Agenda.'