A few days ago we noted that CNN was forced to retract one of their bombshell ‘Russian collusion’ stories when it was apparently revealed that the whole thing was nothing more than their latest, anonymously sourced fake news debacle. Like most CNN stories on the topic, this one carried a salacious title (“Congress was investigating a Russian investment fund with ties to Trump officials”) which implied some nefarious plot by the Trump administration to stage a coup in the United States.

Within 36 hours, however, CNN was forced to retract the story and issue an apology to Anthony Scaramucci (presumably for the whole libel thing).

That story did not meet CNN’s editorial standards and has been retracted. Links to the story have been disabled. CNN apologizes to Mr. Scaramucci.

Now, according to a new report from the Washington Post, the fake story has resulted in the ‘resignation’ of three CNN ‘journalists, including the Pulitzer Prize winner, Thomas Frank.

Now for the consequences. CNN announced on Monday afternoon that three network officials are leaving their jobs over the incident: Frank, the reporter on the story; Eric Lichtblau, a recent CNN addition from the New York Times who edited the piece; and Lex Haris, the executive editor of “CNN Investigates.” The moves follow an investigation carried out by CNN executives over the weekend, with the conclusion that longstanding network procedures for publishing stories weren’t properly followed. “There was a significant breakdown in process,” says a CNN source. “There were editorial checks and balances within the organization that weren’t met.”

The official CNN statement: “In the aftermath of the retraction of a story published on CNN.com, CNN has accepted the resignations of the employees involved in the story’s publication.”

Regarding the personnel changes, a CNN source said, “The individuals all stated that they accepted responsibility and wanted to resign.” A compelling wrinkle in the saga of the story springs from the careful language in the editor’s note: “That story did not meet CNN’s editorial standards and has been retracted. Links to the story have been disabled. CNN apologizes to Mr. Scaramucci,” it reads. CNN is not bailing on all the factual representations in the story, however. “We pulled it down not because we disproved it,” says a CNN source, adding that there was “enough concern” on some factual points that “given the breach in process, we decided to pull it down.”

Of course, this is hardly the first time CNN has been caught reporting fake news recently (see “Looks Like CNN’s Anonymous Sources Got This One Wrong“) and we doubt it will be the last.

For those who missed it, our original post on the retraction is below:

Thursday afternoon, CNN posted a story, by none other than Pulitzer-Prize-winning reporter Thomas Frank, claiming that “Congress was investigating a Russian investment fund with ties to Trump officials.”

“If you’re going to get your nose under the tent, that’s a good place to start,” said Ludema, a Georgetown University economics professor. “I’m sure their objective is to get rid of all the sanctions against the financial institutions. But RDIF is one [sanctioned organizations] where a number of prominent U.S. investors have been involved.”

A fund spokeswoman says there was no discussion about lifting sanctions…

Sounds great right? Well, despite the ‘facts’ they reported, 36 hours later (quietly late on a Friday night), CNN decided to delete the story and issue a retraction, apologizing to Mr. Scaramucci (presumably for lying?)

That story did not meet CNN’s editorial standards and has been retracted. Links to the story have been disabled. CNN apologizes to Mr. Scaramucci.

Despite their deletion of the story, thanks to The Wayback-Machine, we can see what the original story said… 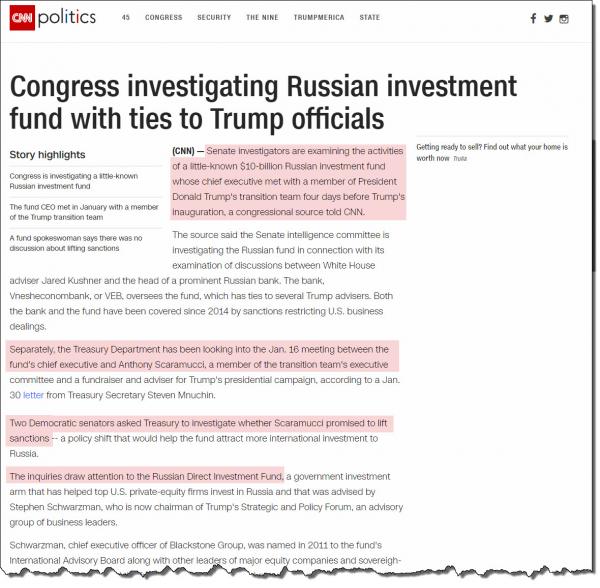 Is it any wonder that Americans are becoming increasingly frustrated by the media’s attention to the ‘Russia’ narrative that is constantly spewed with no mind for factual reporting?

Did Epstein Commit Suicide, Get Suicided, Or Get Whisked Away To Israel? All Claims Are Being Made

Welcome to The Daily Wrap Up, a concise show dedicated to bringing you the most relevant independent news, as we see it, from the last 24 hours (8/10/19). As always, take the information discussed in the video below and research it for yourself, and come to your own conclusions. Anyone telling you what the truth Read More…

A judge has dismissed a lawsuit from the sixth man who has claimed he was sexually assaulted by Dennis Hastert when he was a young boy. (TFTP) A judge has chosen to protect former U.S. House speaker and admitted child rapist, Dennis Hastert, by throwing out a lawsuit filed by a man who claims he Read More…

As with every project sewing corporate profits to politicians with the thread of government approval, the Dakota Access Pipeline didn’t come to fruition as a simple sign-on-the-dotted-line business arrangement. Mobilizing militarized police to a prayer gathering and deploying of mercenaries to sic vicious dogs on unarmed Native Americans attempting to protect land and water from sullying by Big Oil and Gas, Read More…