…It seems the tables have turned.

As Russian citizens prepare to head to the polls on Sunday to vote in regional elections, a senior Russian diplomat has revealed that Moscow has uncovered a US interference effort involving a Silicon Valley tech giant and activists opposed to the government of Russian President Vladimir Putin.

Following a briefing on the matter, senior Russian diplomat Andrey Nesterenko told Russia’s Interfax news agency that the US “certainly does” meddle in the Russian electoral processes, as RT reported. The revelation followed reports that Russia has resumed a major airstrike of a reputed terrorist stronghold in Idlib province over the objections of President Trump, who warned that such a strike would be a humanitarian disaster.

“Our collective opinion is that electoral sovereignty is a principle that all civilized nations should respect” the diplomat said, adding that Moscow will notify “our American partners that the actions of their media outlets allow us to state that they are close to breaking Russian law.”

Specifically, Nesterenko was referring to a possible violation of Russian election laws by Google parent Alphabet, which hosted advertisements for an illegal campaign rally organized by Russian opposition leader Aleksey Navalny. Navalny is calling for protests to denounce the vote, which he believes is biased. To help spread the word, Navalny’s public movement is using paid ads on Google services like YouTube. However, holding an event dedicated to an election campaign on the same day as the vote goes against Russian law. The Russian Central Election Commission, media watchdog Roskomnadzor, and the Russian Anti-monopoly Service have reportedly informed Google about these illegal activities being carried out on its platform.

“Living in a proper law-abiding nation, we expect every actor to play by the rules. Especially an informed player. If the opposite happens, I believe we have tools at our disposal [to address that],” Andrey Kashevarov, the deputy head of FAS, said.

Vadim Subbotin, the deputy head of RKN, said YouTube ads “serve as a conduit for incitement of anti-social behavior during the election campaign.” He said Google and other social media platforms “offer virtually unrestricted instruments” to “individuals seeking to destabilize the situation in Russia.”

The revelations are just the latest example of US hypocrisy when it comes to election interference following reports that the FBI tried to recruit Russian oligarchs as informants. Aluminum magnate Oleg Deripaska, who was targeted by US sanctions earlier this year,  recently admitted in an interview with the Hill’s John Solomon that he colluded with the US government between 2009 and 2016,working as an FBI asset to try and free kidnapped former agent Robert Levinson.

While the US hoped to glean information about Russian interference from these assets, they provided little help. Meanwhile, the cooperation of President Trump’s purported “Russian backchannel” with the US government is the latest piece of evidence pointing to the US government’s duplicity when it comes to interfering in the affairs of other nations.

As a reminder, the US is no stranger to this type of interference, as the map below clearly shows: 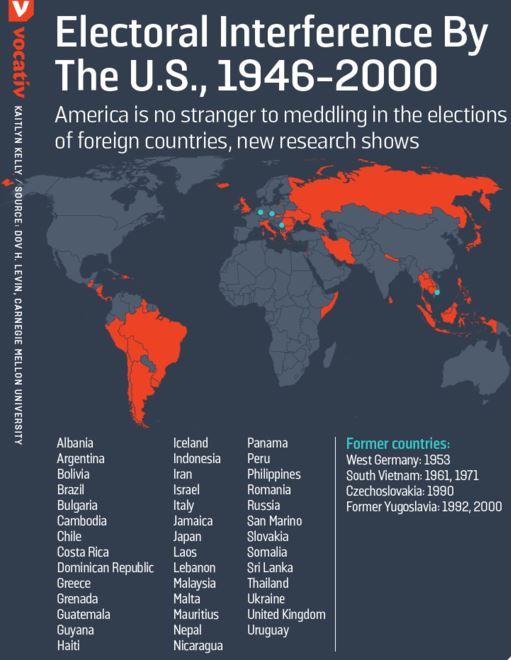 Trump Deception or Trump Deceived? – Iran And The Path To Persia

Any who truly have the well-being of the American people in mind should be openly hoping that Donald Trump actually embodies all the characteristics needed for the success of the country. This hope, regardless of one’s personal feelings for the man, is for the success of the nation, not a single person, despite the manipulation of the Read More…

One of the most controversial environmental issues that the Trump administration is facing today is the matter regarding the contamination of drinking water of Americans living near or at military camps. The contamination has been proven to be brought about by the recurrent and persistent use of excessive amounts of firefighting foam during military training Read More…

Iran to America: Stop Worrying About Us, Your Government Is About to Collapse

Iranian officials have struck back at the Trump administration’s verbal attacks on Iran, suggesting the U.S. should worry about its own domestic problems before turning a critical eye towards them. According to al-Monitor, an arguably pro-Tehran media site: “Iranian officials have condemned US Secretary of Defense James Mattis for calling for regime change in Iran. During an interview with a high Read More…